Hi all hope today finds you full of joy and happiness as after the rain yesterday we have sunshine at the moment but I guess its still early.

Today I am sharing a card I ave made for my hubby for our anniversary on the 28th of this month, and we will be celebrating our china anniversary. My card celebrates this fact as my main colour used is china blue, I didn't think a teacup would be very romantic not that I have any teacup stamps but that's by the by. 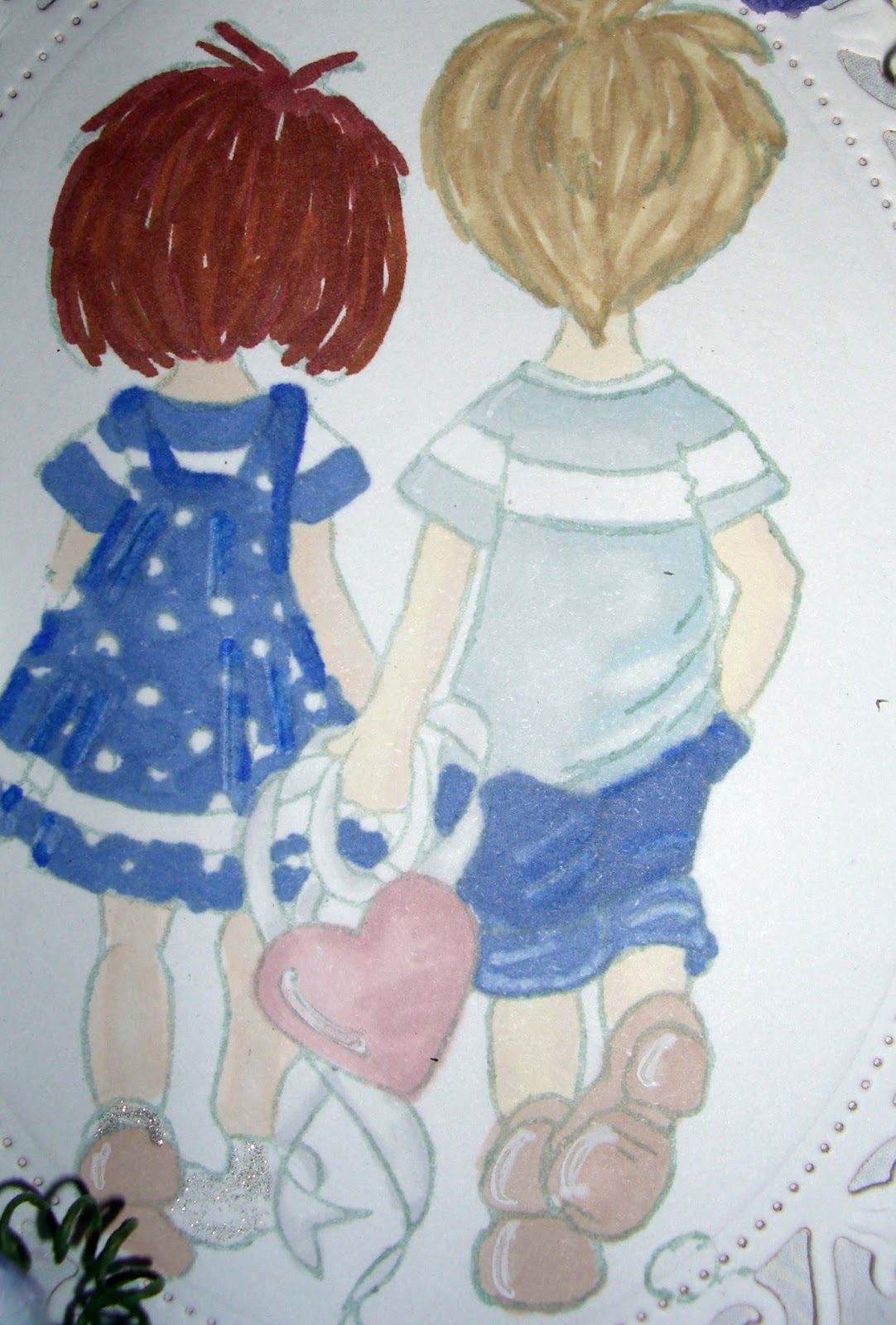 I used this fab image from Sugar Nellie, one of a couple of cutie couples I have and find so useful for not only anniversaries but engagements too.I coloured them with promarkers as I said using china blue as my main colour which I carried through with some flowers I won from Wild orchid crafts . 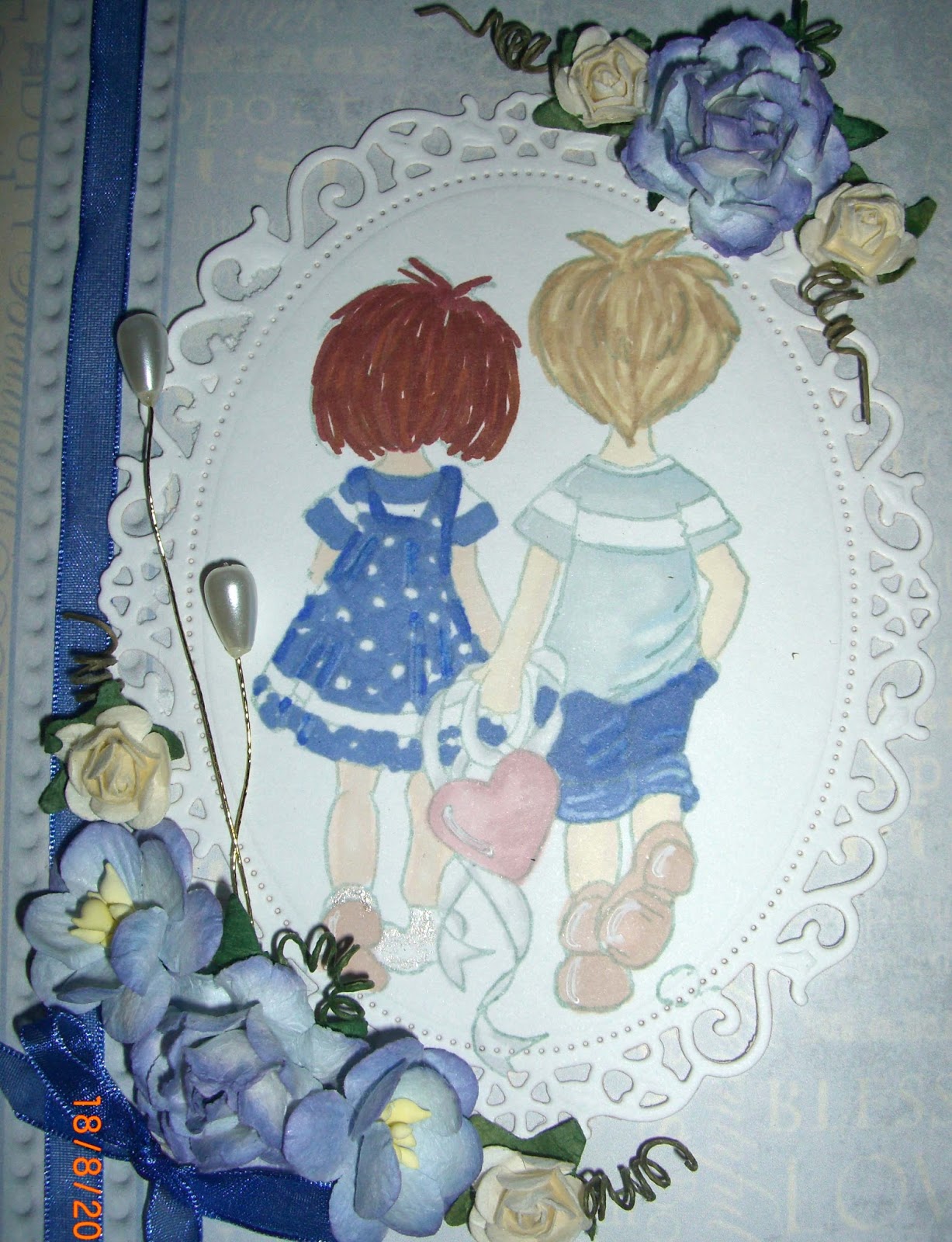 The base of my image is a new die I got last week one of 2 I bought spellbinders floral oval and I suspect will be amongst many to follow. I've had my bigshot for about 3 years now and sad to say apart from alphabet dies and a big daisy- I have a thing for daisies I even had them for my wedding flowers I haven't until now invested in any bases.

The ribbon was from a stamp nation set I got from QVC several years ago when first starting out with crafting and the base card was a real find, its from the freebies on offer by Debbi Moore. Recently mum asked me to make a wedding card similar to one she'd seen(in a post below) and I liked the paper Jayne had used so decided to investigate. I couldn't find what other papers were on the CD she used (Debbi Moores Venetian collection) but found there was quite a selection of freebies and amongst them this base card. There are so many marriage related word on both back and front and it was just the right colour for what I wanted as I had blue for my bridesmaid dresses so had decided to use blue on my card despite emerald and white being the 20th anniversary colours as they mean more to me. 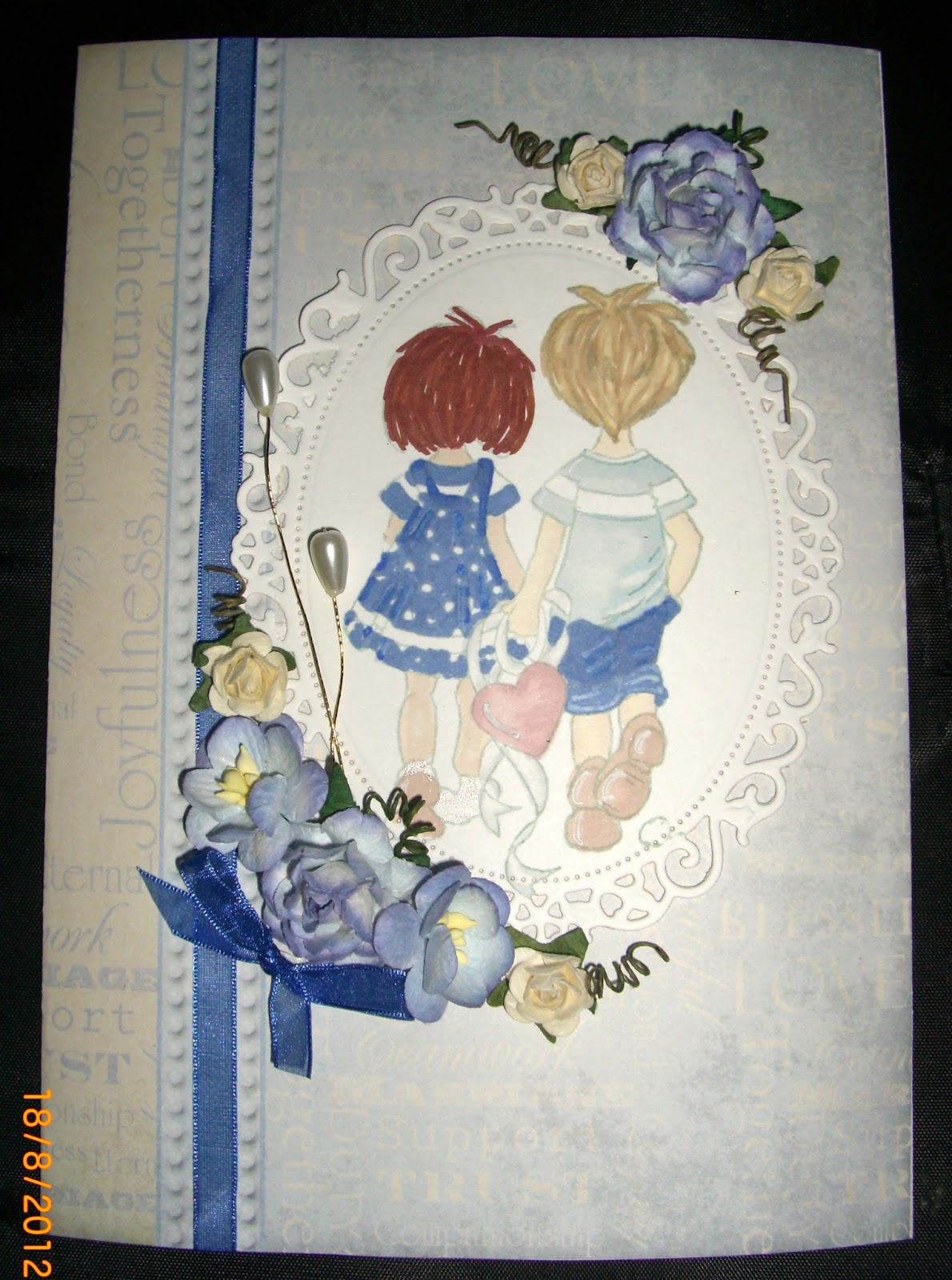 The design is probably only my second attempt at shabby chic, I think I had to do one when on a DT ages ago -really not my comfort zone and am willing to accept any pointers ( I know there are flecks missing in the girls hair -intentional as my son keeps telling me I have the odd grey hair so that's for him, my hubby is well grey and my son even has a few at 19 which is why he is so desperate for me to join the club).

I would like to enter this card into the following challenges:-
Addicted to stamps-shabby chic/vintage
polkadoodles-have a heart( no actual hearts but certainly for and of a heart-hope it still counts)
Totally papercrafts-favourite colours
totally gorjuss-die cuts and punches
Allsorts-use your new stash
A gem of a challenge-punch it out
crafty sentiments-dies /punches

Aww Julye this is such a darling creation! Luv the sweet image. Thanks so much for sharing it with us at Crafty Sentiments. Lotsa luv, hugs xxxx

Thank you so much for joining Totally PaperCrafts challenge!
Hope you'll play along with us in the upcoming challenges too.

Gorgeous card, such a delightful image and I love the colours
Thank you for taking part in A Gem of a Challenge this week
Sue xx

A gorgeous card, love the pretty blues! Thanks for sharing with us at Crafty Sentiments, good luck! Susan x

So sweet and pretty, love the image and the colour combo. Thanks for joining us at A Gem of a Challenge and Happy Anniversary! xx

What a sweet card Julye, Im sure your hubby will love !! Thanks so much for playing at Crafty Sentiments Designs !!

Lovely card, thanks for joining us at Polka Doodles.

Your card is just beautiful! I love your layout and choice of white for the base card and mat! Beautifully done! I am your newest follower!
Thank you for joining us at Totally Gorjuss for our challenge!
Hugs,
Marie XX

Thanks for sharing at Totally Gorjuss this time!

Hi thank you for your lovely comment and for becoming a follower too.

Beautiful card! Thanks for joining us at POlka Doodles! HUgs xx