From the end of July to early September my family has quite a few celebrations 8 birthdays and 4 wedding anniversaries and that's not including any friends birthdays and anniversaries of which there are quite a few. This year we celebrate a special birthday at the beginning of September as its my hubbies 50th birthday. He is one of the kind of people who treat birthdays as just another day especially when its his own ,I must attract them as my son is the same and so is my step dad, would have said its genetic but obviously my step dad can't fall into that category, does that mean its just a man thing.

I had all these fun ideas for parties in my head as I did for my sons 21st earlier this year and really had wonderful celebrations planned for my hubbies birthday but then he throws into the mix that he wondered about going away for the weekend of his birthday so i then had to put party plans away as how could I plan a party early in the year booking venues and entertainment in the form of a casino if he had the idea of not even being in the country. I'm still not sure whether he just had an inkling that I might plan something and just said that  or not but he has been known to give me 2 days notice for a trip to the USA so I really couldn't risk it.

I still can't plan anything as he is working on his birthday and may just pop to the works local with friends for a drink after work so to book a meal out could also be a problem ,why do some men make it such hard work to plan nice surprises for them?

Well anyway the one thing I can rely upon is that he will open cards on his birthday so here is the card I have made at my sons request for his Dad. 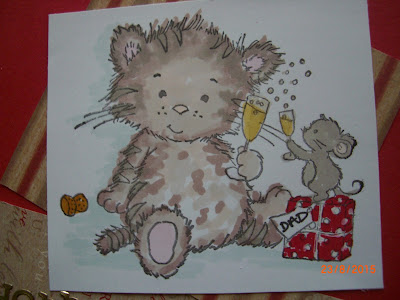 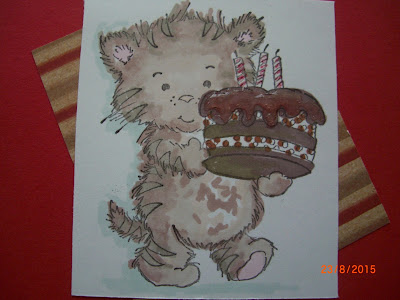 I used more Lily of the Valley stamps Thomas the cat sipping sparkly fizz and presenting a birthday cake. My son has a super cute cat though she is a girl and has my hubby sorted , when she is at my house as I cat sit whilst my son is at work as she is suppose to be a house cat( but that's another story), when hubby comes home and sits on the sofa she goes to the pack of dreamies and paws at it or knocks it over till hubby complies and throws them for her to chase and catch.

I coloured the images I used with promarkers and added a bit of sparkly with sakura glitter gel pen. The glasses  and the cake frosting I added glossy accents to to add that bit of shine, the cake had to be chocolate as hubby is a chocoholic without question. 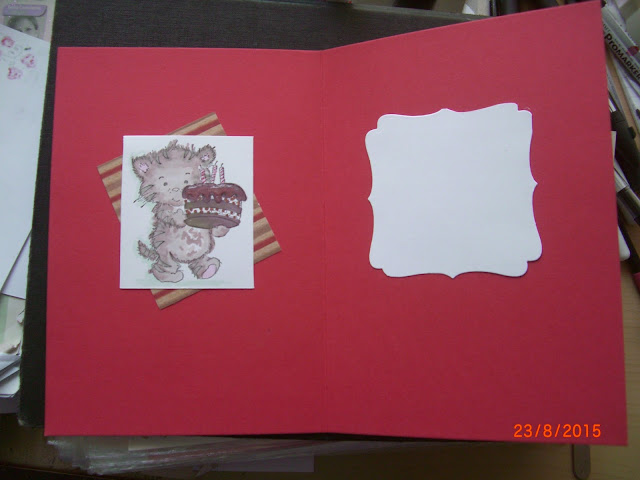 The papers are from a wellington set and I thought they worked really well when added to the red base card. I chose red as my son has earlier this year been told he is now partially sighted as he has cone dysfunction and some macular degeneration making him colour blind though he does say he can sometimes see red shades so I really wanted him to be able to appreciate  the card he requested for his dad. 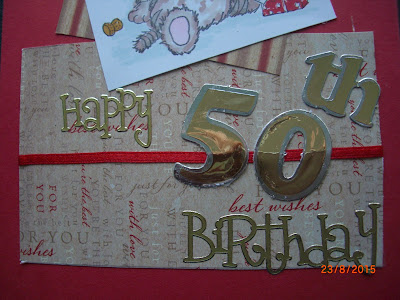 The sentiment is a large peel-off and the large numbers are from my stash but I can't remember where they came from sorry. 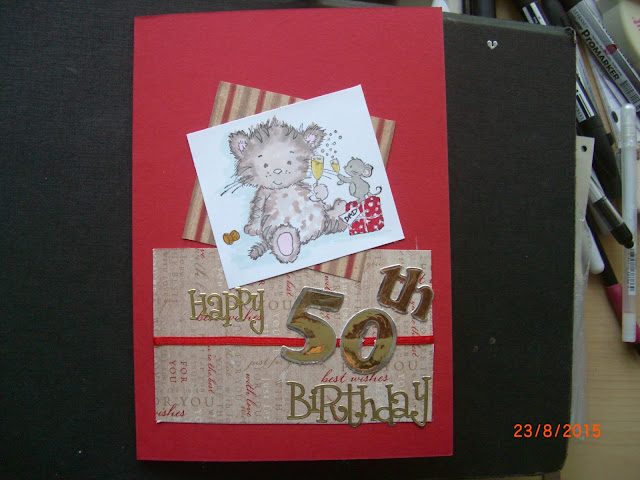 sassy studios - for the boys

daring card makers - lets hear it for the boys

creative fingers - anything goes
Posted by Julye at 9:48 am

That is such a cute card and I hope the celebrations go well, whatever is decided upon! Thank you for playing along with the Lets Here it for the Boys challenge at Daring Cardmakers :)

A very cute looking card. Sweet image and lovely colours used. Thanks for joining our sketch challenge over at PFP this week.
Love n hugs
Marie

So cute, love the sparkle.thank you so much for playing along with us over on the pfp challenge blog
Hugs Lou xx

Cute card! Thanks for joining us for DTBST at Sassy Studio Designs!

Yes I definitely think you covered the bit! such a cute card too.
Thank you for joining in The Craft Barn Challenge.
Jane x

Cute card Julye. I love the pretty image and fab papers you've used. Thanks for joining us at PFP this week. Hugs, Denise x

Such a sweet card and love the images you have used. Thanks for joining in at Daring Cardmakers. x