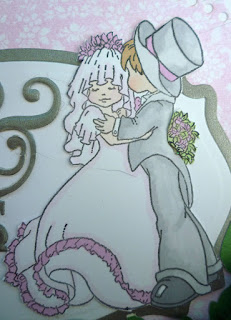 There are always weddings in the summer months and my niece is getting married later this summer so I made her card early as if I left it till nearer the time other things would get in the way and I didn't want to rush a card for such a special occasion.

I used a funky kits sugar nellie image (which is on sale) called first dance and coloured with promarkers I used greys and pinks as these are her wedding colours and the colours of her invitation.

I used several grand oval spellbinder dies to cut the base cards and layers for the card using white card for the bases and Lily of the valley paper (I think) for the coloured layers.

I used another Spellbinders die to make the central plaque for both layers of the card which I decided to make as an easel card.

The lower layer will be where I will write my message . The sentiment on the base not only sends wedding day wishes but acts as the stop for the easel part of the card. I raised it using sticky pads after stamping it using versafine ink and another lily of the valley stamp. 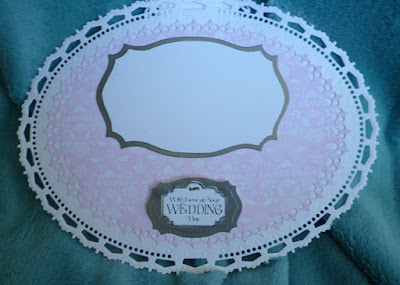 The top of the card used the same die to create the plaque to which I attached the couple stamped image to one side and a crafter's companion Mr and Mrs die towards the other, which I cut in grey pearlised card just like the plaque mat on both layers. 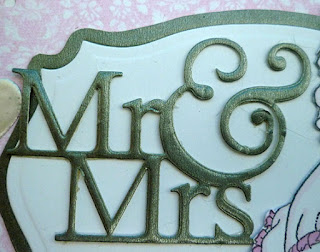 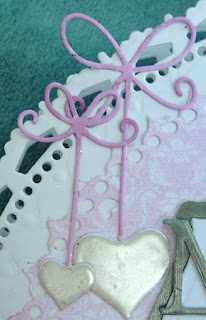 I finished the card with some cute little memory box dies the hearts I covered with versamark ink and used moonglow magic pearls embossing powder on the hearts and pale pink promarker on the ribbons. 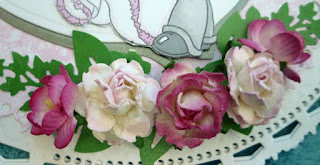 The flowers are from my stash shades of pink of course and some die cut foliage beneath. 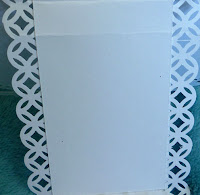 The bit that joins the 2 card layers I cut from white card and used a Martha Stewart border punch to pretty the edges.

I'm sure she and her hubby to be will have a wonderful day and future together and I hope my card will add just a little bit of magic to their day. 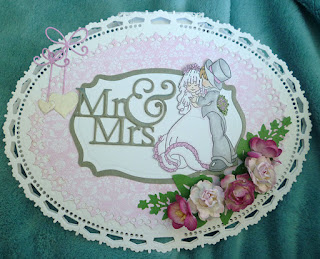 For those worried my post will spoil her surprise needn't worry as she doesn't even know my blog exists so I have no worries about he seeing her card. 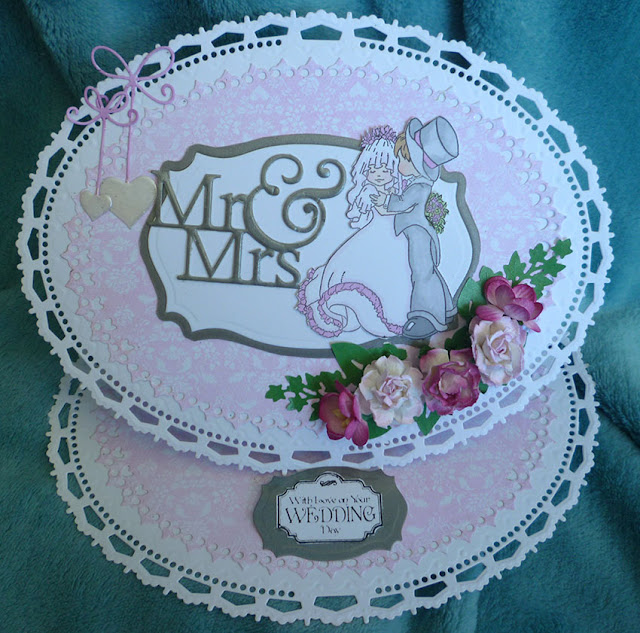 creative craft cottage- layer it up

craft your passion -anything goes

crafting from the heart - anything goes

paradise of stamps -anything goes

A beautiful card. Love the design and all those die cut borders. Thanks for joining AYLI challenge. Elaine

lovely card, cute dies too! Thanks for joining in with our challenge at As You Like It,
hugs Samantha :0)

What a beautiful wedding card Julye. Great idea to make it in advance, nothing worse than the last minute rush, there's never time for the extra attention to detail. This card is perfect, so beautiful and sure to be adored by the happy couple, especially as you've used their wedding colours! Now THAT'S attention to detail. Thanks so much for sharing your gorgeous wedding card with us at Sugar Nellie! So glad you joined us with your gorgeous make. Love that sweet Sugar Nellie stamp. Hope you'll join us again for our next challenge too. Hugs, Wends xoxo Sugar Nellie Challenge DT


Thank you so much for entering our ATG challenge at Through The Craft Room Door this week. Looking forward to see you again next challenge.

Through The Craft Room Door

Such a pretty card. Thank you for joining us at Crafting from the Heart.

Very pretty wedding card. Love your photo tutorial. Thanks for sharing. Thanks for playing along Simon Says stamp Anything Goes Challenge
Gayatri xx

Your wedding card is simply elegant and full of wow factor! Everything about it the color, layout, the embossing and image is simply inspiring. Thanks for sharing your inspiration with us at 4 Crafty Chicks Anything Goes!

How lovely. Thanks for joining us at Craft your passion challenges.
Happy crafting!
Catherine x DT

How lovely. Thanks for joining us at Craft your passion challenges.
Happy crafting!
Catherine x DT

yOUR EASEL WEDDING CARD IS SO PRETTY, LOVELY TO SEE HOW YOU HAVE BUILT IT UP TOO. GLAD YOU HAVE JOINED SUGAR NELLIE, GOOD LUCK AND PLEASE BACK TO SHARE MORE OF YOUR WORK, HUGS BLANKINA