A while ago I was lucky enough to win a gift voucher from Aurora wings and although it was a difficult choice choosing which of the fab images as my prize this was one of them I decided upon.

I love how detailed the images are and on this one how I could identify the flowers within the image as some I have in my garden. 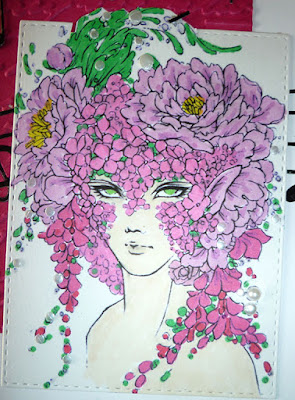 I decided to use my garden flowers as the colour inspiration even though pink is not one of my go to colours, but it worked quite well. I used promarkers to colour the image and decided liquid pearls would be good for the gypsophila type flowers or I guess they could just be pearls. Anyway my son's cat had been round for a visit and I couldn't find my liquid pearls(have now , should have known she hides things under small gaps so they were under my paper rack). I rummaged through my stash and found some tiny pearl stick on drops so used them. Now I learnt by my mistake ,as I had intended die cutting my image out before I added the pearl drops but in my enthusiasm of finding the sticky on ones when I had spent ages fruitlessly searching for the liquid pearls I put the sticky pearls on and then die cut . Big mistake won't be doing that again as my nice little domed drops were all flattened and I only had a couple left to replace them. Anyway I used spellbinders die to die cut my image. 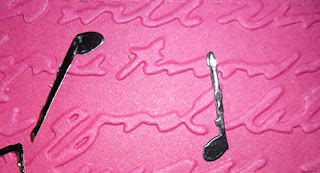 I wanted to keep my card fairly clean in design so followed a sketch for a challenge long gone now by CAS on sunday so used some pink card as my background matt. I thought it looked a bit flat so as my image was quite theatrical I thought I would add some script so dry embossed the pink card to add texture.

The sketch had a banner so I carried on with the theatre theme and added some music using a memory box die and the notes I didn't use in the banner I scattered around the script . 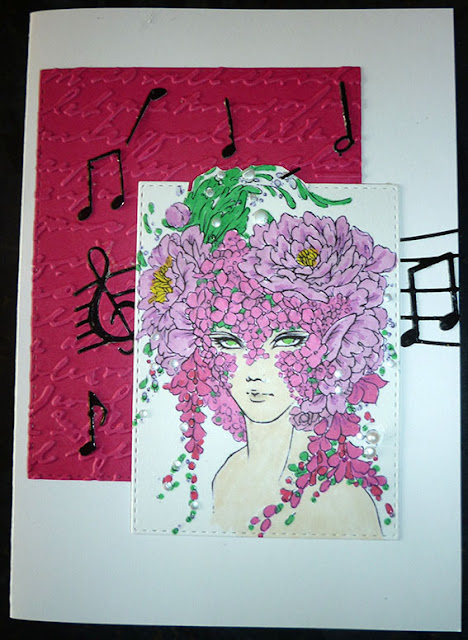 Not my usual kind of card but I am quite happy with the outcome and the mix of dies and stamping too.

the pencil case - anything goes

A bit more time to craft - anything goes

passion for promarkers-make it digital

Julye this is a beautiful card.

Thanks for join us at ScrapbookStampSociety Challenge.
Good Luck and hope to see you again

Very dramatic and pretty in pink! Thanks for joining us at HOC!

Beautiful coloring! Thanks for joining us at House of Cards!

Fabby fun image, filled with lovely details. Thanks for joining us over at PFP and my digital challenge.
Love n hugs
Marie

Such a gorgeous card Julye. I love the fab image and your colouring is perfect. Thanks for joining us at PFP this week for Marie's 'make it digital' challenge. Hugs, Denise x

So stunning Julye, really gorgeous colours and the image is beautiful.
Thanks for joining us this week at PFP :D

So pretty in pink, Julye and I love the texture of the embossing and movement of the musical notes. Thanks so much for joining our 'Theatrical' Challenge at Aurora Wings. xxD

This is a beautiful image! I love that you were able to look to your own garden for inspiration! You have done a beautiful job with this one!! Thanks for playign at Aurora Wings Challenge Blog!

I love the color combo of pink and green, Julye. It's so lovely to read that you took inspiration from your garden for the colors, as so many of my images are inspired by the flowers in my garden. I love the bold design on the card, too. Stunning! Thank you for joining our 'Theatrical' challenge at Aurora Wings. Mitzi xx

beautiful, thank you for playing along at http://cutedaisymay.blogspot.co.uk/ good luck and hope to see again xx

Lovely design thanks for joining us at Whoopsi Daisy, Louise DT x

lovely - thank you for joining us at The Pencil Case
xx

Beautiful colours. Thank you for joining us at The Pencil Case challenge. Helen DT