Another guy light weight card for my mum in law and ex pat friends in Tenerife. This time white base card and again a paper matt , this time in navy blue and I also cut the britania 'happy birthday ' sentiment from the same paper. I used .

I took a piece of white card again slightly smaller than my navy matt and used memory box starlit breeze die to cut vertically up one side so if gave a fancy border pattern to the card. I could have just added a piece of red mirri card beneath this panel but trying to keep the weight of the card down I cut the die again in red mirri card and inlaid the stars and dots. I had also cut the happy birthday into this card and inlaid the navy cut so the card remained as one layer , and as the centre of the matt had been removed so as to keep the card light weight it becomes virtually a one layer card. 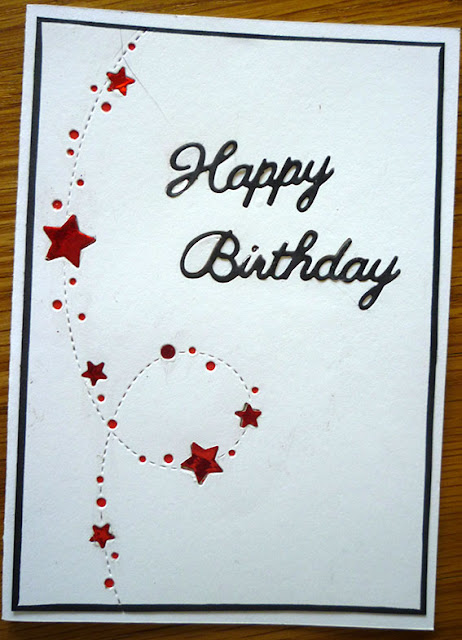 Very clean and simple but perfect for a guy and airmail post too.

less is more - colours of your country's flag

Your card is very cool! I love the inlaid stars and dots pattern! Thanks for joining us at the Cards In Envy Challenge!

Wow! That's one beautiful use of dots and stars, fantastic crisp design and love how you've incorporated the colours of your flag too! Great idea and thanks for playing along at Less is More this week

Gorgeous ! As you say very clean and simple, just what we love ! This dots and stars die is really awesome ! A beautiful take on our challenge ! Thanks for sharing and for playing along at Less is More !

Fab card!
Thanks for joining the SHOPPING OUR STASH crew for our Flag Day challenge this week!!

Super CAS card, love it. Thanks for joining us at shopping Our Stash for the Flag Day card.

Loving that die cut, and the inlaid red mirri stars were a fantastic idea. Simple yet striking.
Thanks so much for sharing with us at Less is More, Anita x

A lovely card!
Thank you soo much for taking part in our "anything goes with optional red, white & blue” challenge over at Creatalicious & good luck in the draw.
Hope to see you again in our new challenge as well…