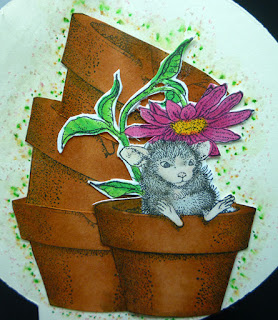 I can't believe how time flies by and this is already the time for another house mouse challenge guest designer card for me, its been such fun.

The challenge this time is flower power . I decided that this time I could use one of the few house mouse stamps I have, this cute mouse taking a rest beneath a daisy, my favourite flower. I always imagine he's taking respite from a blazing hot summer sun ,wishful thinking I guess but you can always dream of a red hot summer in the UK they do happen occasionally.

I decided to use a die to create my base card one I think is rather clever,well its several dies really as its a diesire create a card die. There are several different versions that can be  created but for my card I went with an open lace look in cream card. 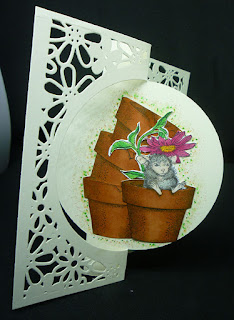 The circle that is the central focal point of the card I used to place my image. I decided to create a stack of pots to add depth to the scene by stamping the pot part of my image 3 times and slotting the images into each other once coloured to crate the stack.

The images are all coloured with promarkers and spectrum noir alcohol markers and fussy cut out, I used pointalism technique to add a shadow around the images which just add a little more depth and also ground the scene I created too.

No sentiment as that can be added as appropriate to either the cut out design or to the reverse of the circle the image is on.

So hop along the the challenge and join in the fun. 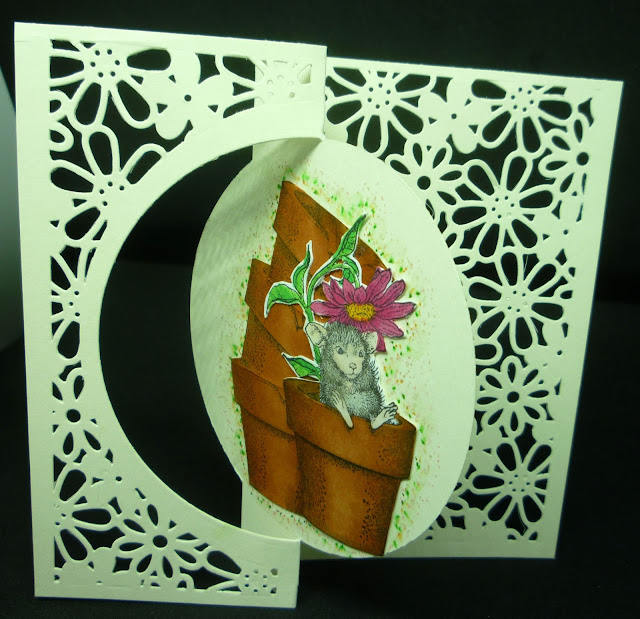 Snap Julyes we used the same image, but in very different ways, love your design sweetie !!

WOW, Julye what a beautiful, creative card. Love how you used the pots
and colored it up so beautifully. Nicely done.

Thanks for sharing your super Guest Design creation with us.

Gorgeous card Julye :-) the little mouse in the pots is adorable and I love the fancy frame and swing design, so pretty :-)