The age of technology

I feel old and the reason for my suddenly feeling old and have to say a wee bit sad, my son received his first 18th birthday party invitation the other day. Now I know what you are all thinking when you have children they inevitably grow up, well age wise anyway and as my son is 16 and many of his friends are in the year above him at school I should have realised that there would be some 18th birthday parties in the near future. Ah but you see this isn't what made me feel old as I accept all this and thought it was great and as he so often feels isolated due to his mobility problems I thought it would do his self confidence the world of good. I felt old when I said lets see the invitation then, and was told it's on facebook! Yes an 18th birthday party and all the invites and RSVP's are expected to be sent via the internet social website. 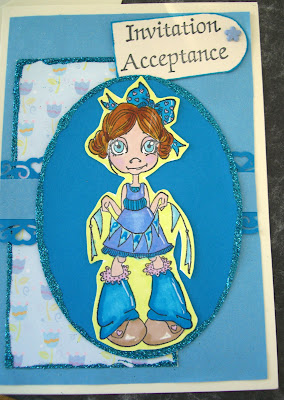 I feel sad as I can imagine this next generation missing out on all the joys of opening acceptance cards and invitations in the mail and wonder if this is how future wedding invitations may be sent. I also worry a little as young people seem to have such a large friend base that it may be a way for parties and functions invited this way to be easily gatecrashed by those not invited. Please don't get me wrong I am a fan of technology and I can see how invitations like this will be environmentally friendly but it could put us crafters out of a job.

I decided that  even if my son sends his RSVP via facebook he could also give this friend a physical RSVP and show her just what she is missing. 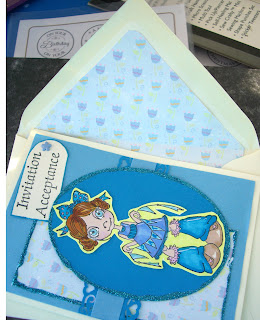 I had this Sugar nellie sassy girl for christmas and thought she would be perfect. I coloured her with various shades of blue Promarkers with highlights of pink, the aura I used lime zest as it was one of the colours I picked from the patterned paper I used. For a change I edged my papers in glitter, well what girl doesn't like a bit of bling and I used glitter paper for the base, and for the horizontal band on plain blue paper which I punched a fancy edge on. I made a tag for the sentiment and attached with a blue flower brad. I decided I'd also decorate the envelope, partly as there is a challenge for that and also as it's something I really wished I did more of decorating the inside of the cards I make and the envelopes too, I would make it into a new year resolution but know I would break it in no time at all so there isn't much point, just try and do it when I feel like it and remember too.Hope she likes it and it shows her what she has missed out on. I am fortunate that I have a son who appreciates cards and those he has given cards to in the past seem to appreciate them too,still I guess using facebook is cheaper than paying for 100 invitations and parties don't come cheap so maybe this was a necessary concession to be made. I do hope her friends don't all send her e-cards for her birthday though as that would be a real shame, but at least she will get one handmade and hopefully appreciated birthday card from my son. 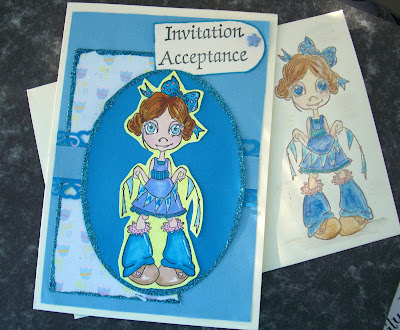 I would like to enter this card for the following challenges:-
Crafty purple frog-use your new goodies
Just us girls -decorate and line a matching envelope and card
Secret crafter saturday challenge-tons of texture
stampin' for the weekend-new and blue
Delicious doodles-new
Friday sketches-layout used but not entered as I have more than 6 combination challenges -silly me but never mind
Papercutz-use metal, wire , brads or eyelets
Sew many challenges-flags/bunting
Fun at fairy knoll-all that glitters
Fab n funky-anything goes
Scrapbook sisters-anything goes
Claudia and co-use a tag
Lothian crafts-anything goes
Sweet stampin-try something different(glittered layer edges)
Make it colourful-warm or cool colours-I used cool

Thanks for joining us on Secret Crafter Saturday Challenge :)

Thanks so much for playing along with Just Us Girls this week!

I think your son's friend will love the card! Thanks for joining my blog candy, good luck! Kim

So sweet! I love how you colored her and decorated the card!

...I hope invitations and hand written notes don't ever get replaced!!:(...

Oh, and I think it is so darling about your valentine's secret;)...My son is still in the "I'm marrying mom" stage (he's 5), but one day I'll have to be a little more creative in showing him how in love I am:)-- Right now it's totally okay to smoother him with kisses!!:)...Sounds like your guy has a really special, loving mom!:)

AH I understand what you mean about technology and invites etc. I think I was bummed when everyone on FB sent FB birthday greetings but no phone calls, real cards etc. I will continue to send real cards/invites too :-) Super cute one! Thanks for playing along with JUGS this week - we surely appreciate your support and participation.

Fab card,love the colours! Thanks for joining us at Fairy Knoll this week, hope to see you again soon
Claire xx

What a great card.
Thanks for joining us at Fab 'n' Funky this time.
Sharon x

Love the acceptance card just perfect for that age! Thanks for joining us over at the CPFC love Chanelle xx

What a cute image you used today! Beautiful cool colours! Thanks for playing along with us at Make It Colourful Challenges! hugs, Angela

Your image is adorable and the coloring is great.Nice take on the theme.Thank you for playing with us at Make it colourful challenges,RubyM:)

Wonderful card and I love that reason behind it. :) Thanks for joining us at Fairy Knoll! Smiles ~ Brandi

Fabulous card, gorgeous colours. Thanks for joining in the fun this time at Sweet Stampin. Hugs, Claire x

What a nice mom and what a nice son for giving the cards to his friends! Your card is so cute and the envie even better! Thanks so much for playing our JUGs challenge!