Two Christmas cards this time using a mix of dies and stencils from spellbinders, Britannia and memory box .

I used this card by Pam for inspiration and although I didn't have the exact dies I tried to improvise.

For my first card I used a memory box stencil as a base layer for my card on top of a white base card. I haven't yet used my stencils in any conventional way by colouring through them but am loving using them for embossing. 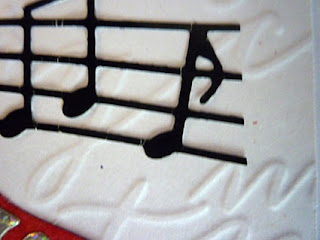 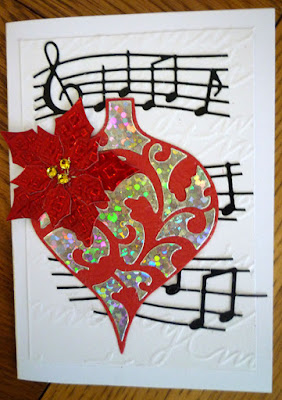 I used Eliana bauble again from memory box,cut it twice and inlaid one with the other.

I used spellbinders poinsettia and used 3 yellow pearls for the centre.
No sentiment on this card as the stencilled background says merry Christmas though I could add a sentiment later not sure yet.

For my second card I decided to hand draw my music score and just used the notes from fancy music border , no background this time other than the music. After looking at my photos I need to fill the gap in my treble clef. 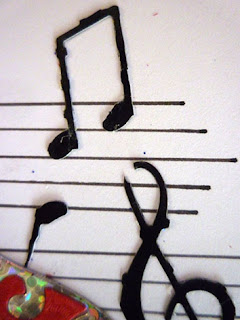 I ued the remaining  pieces of my bauble die-cuts and pointsettia dies but this time added a Britania die cut 'seasons greetings'. 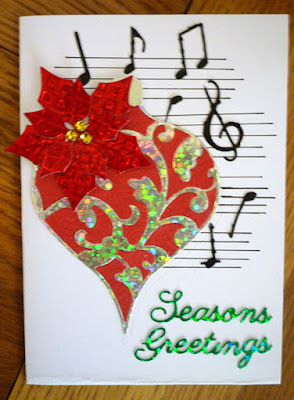 I quite like both cards but think the stencil embossed backing just adds that little bit of Christmas magic.
I would like to enter these cards into the following challenges:-

A bit more time to craft - anything goes

Shopping our stash - No Stamps

what a beautiful and CLEVER card... each detail is so well-thought-out and beautifully constructed. i love everything about this! thanks for SHOPPING YOUR (no stamp!) STASH with us this week! :)

Your card is wonderful! Your stitching is fantastic! This card is stunning and I bet it's even more beautiful in person where you can see the sparkle. Thanks for joining us at MFP Stamps Challenge!!
Hugs

What a stunning card! Beautifully crafted and sure to be a favorite with whoever gets it! Thanks for joining us this week for the QKR Stampede weekly challenge!

So pretty with the "music" to set off the lovely bauble. Thank you for entering the QKR Stampede - anything goes - challenge this week. Dorothy S, DT member.

Beautiful card. Thank you for sharing with us at MFP Stamps Challenge.