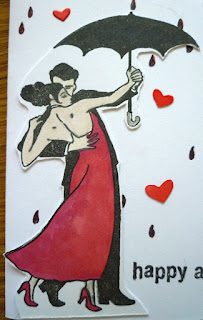 I saw this Stampedous image on a card whist searching for memory box images for ideas and fell in love with it. There is very little colouring to do as most of the image is black so I used promarkers to give the lady a red dress and matching shoes. I them fussy cut the image out.

The image comes with a lovely sentiment though it is rather close to the image and rather than cutting the stamp in two I managed some masking to enable me to stamp just the sentiment and fussy cut this to allow me to place elsewhere on my card. 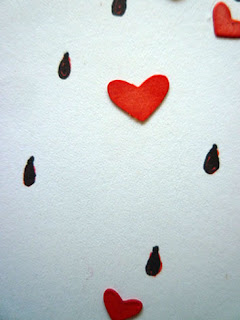 I  used the Memory Box splashing puddles die for my backgroud, I didn't want the puddles as they are a little too large for my couple to dance through, it just made me imagine that if they tried they would be in water waist deep and it would be like some sad slap-stick comedy. instead I used a cut out die-cut as a stencil to place my raindrops as although large they didn't look too big. Initially I coloured them red but went over them in black(again promarkers) as I thought the red looked a bit too much like it was raining blood.

I added some poppy stamps candy hearts again coloured in red promarker and randomly stuck them in-between the raindrops and added one to the sentiment too.

I finished the card by adding a darkroom 'happy anniversary' again in black.

I am quite happy how my card turned out and how I used my die in a different way too as I think the raindrops look far more random than I could have achieved freehand, and will definitely be doing this again. 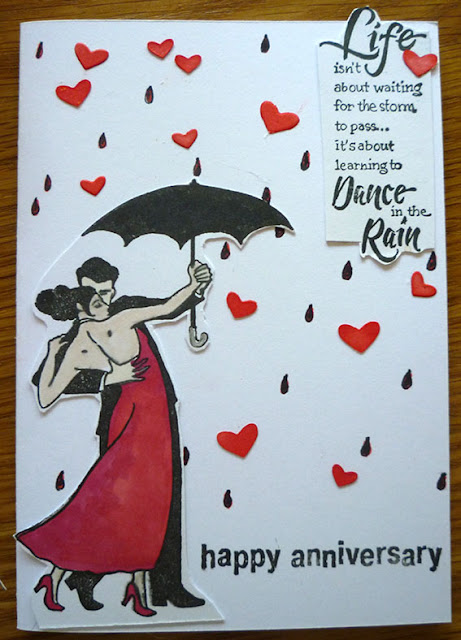 craft your passion -anything goes

crafting from the heart - anything goes

Creatalicious - anything goes optional inspired by a song(lady in red)

Allsorts - black,white and one other colour

This is so beautiful!! I love the "Storm" you created with the rain drops and flowers! Beautiful!! Thanks for playing at Crafty Gals Corner!

A great image and sentiment, great raindrops too.
Thank you for joining in our colour challenge this week at Allsorts.

This is such a great card. I like the sentiment.
Thanks for playing with us at Craft your Passion Good luck!! Michelle(DT)

Stunning image, gorgeous card....
Thanks for sharing with us at CraftyCatz this week...x

A really super card Julye, the red makes for a very eye catching combo with the B&W, many thanks for joining us at Allsorts challenge.

ooh it looks super, thanks for playing along with us at CRAFTY CATZ x carol

A wonderful card!
Thank you soo much for taking part in our "anything goes with optional pick a tune” challenge over at Creatalicious & good luck in the draw.
Hope to see you again in our new challenge as well…