My in laws live in Tenerife and birthday cards are apparently very hard to come by and if you do find them they are extremely expensive. There is quite a big group of ex-pats many in their silver years and the only cards that don't fall into the really expensive group are those from the church shop which after receiving some tend to be made from recycled bits from bought cards and the insides of envelopes. There is one craft shop in Los Cristianos where they live but obviously there is no one in their circle who is a crafter with the money to spend on local supplies. 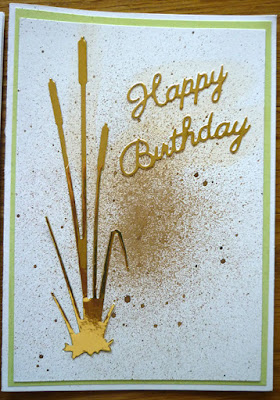 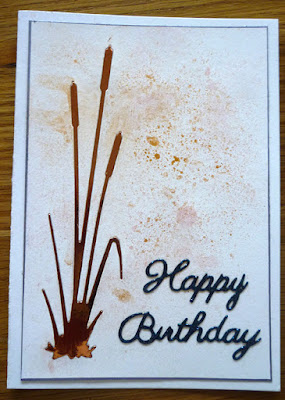 I added a colour matt under the spritzed layer on a 240gsm card base trying to keep the weight down. I cut a 'happy birthday' sentiment using a Britannia die in co-coordinating metallic card to match the colour matt layer on each card and hopefully these will go down well.
I have made a few other cards to send to Tenerife for them to sell hopefully they will make a little more money for charity and if they go down well make enough to pay for me posting them out there too. I have tried to get my mum in law into card making but its just not her cup of tea so hopefully this will help.

I would like to enter these cards into the following challenges;-

I am so enthralled with these beauties! Love the simple lines and the spritzed background. Superbly done! Thanks for joining us at Crafty Cardmakers for our 'Birthday' challenge,
Glenda
DT

Very nicely designed CAS "guy" cards. How wonderful to help out the church in this way. Thank you for sharing your design in our Birthday Challenge at Crafty Cardmakers!
:) Pam

Both cards are just super. I do like the soft backgrounds and the die cuts. Thanks so much for playing along with The Male Room this week! Deborah, DT.

Great CAS cards, simple but eye catching. Thank you for sharing them with us at TMR.

This is a gorgeous CAS design.
Thank you for sharing this with us at Noor Design UK.
Hugs Sharon. x