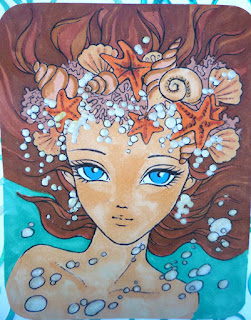 I love aurora wings images, I'm not really into digital stamps but when I won some of these I just fell in love with Mitzi's images, have to say she can really draw faces which sadly many digital images seem to fail at doing,in my opinion anyway. I coloured this sea princess with promarkers and added some liquid pearls to her crown for a little added dimension and because it just felt they should be there.
I love how her hair just seems to be flowing in the water. I filled my area with colour and rounded the corners for a softer look. 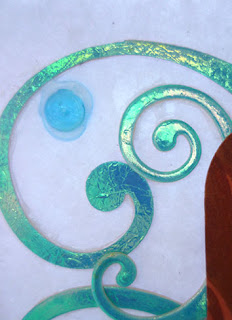 I wanted to keep the image as the focus of my card so decided on a white square base card and instead of backing paper I decided to use some diecut flourishes for my backing of the image.

I cut them in some metallic card I have had for ages it has like an iridescent blue gold sheen and always reminds me of tropical seas well how I dream they would look never having been anywhere tropical. I added them to form a frame and randomly stuck some water drops to represent bubbles.


I know its not the best photo in the world but I guess you get the idea .

crafting with an attitude - always anything goes 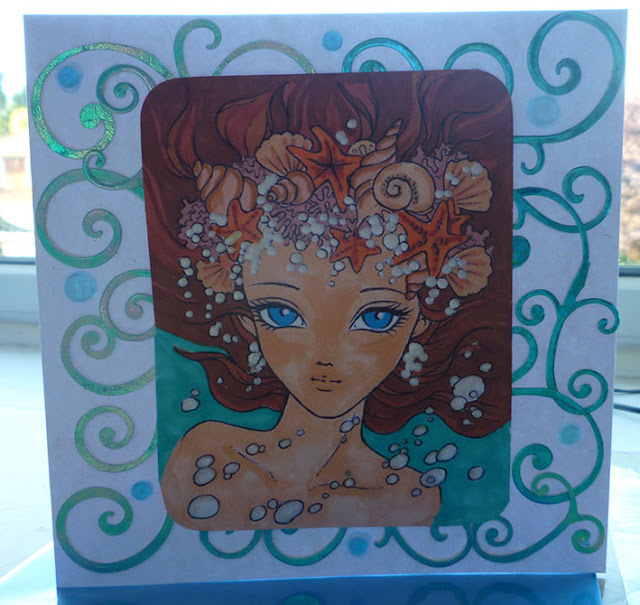 Lovely! I do like a die-cut flourish!!!! That metallic card looks beautiful and perfect with this 'watery' theme.
Rhanks for joining in with The Daring Cardmakers' "Sparkle and Shine" challenge this week

Stunning! The coloring is exquisite! Thank you for joining us at Perfectly Created Chaos challenge. I hope to see you again soon!

Beautiful. The die cut flourishes are perfect especially in the metallic blue. Thanks for joining in at Daring Cardmakers. x

What a lovely card! Thanks for playing with us at Crafting with an Attitude :) xx Mari

This is a pretty card, such a beautiful image.
Thank you for joining us for our Anything Goes challenge at Polkadoodles.
Pauline
x

Absolutely beautiful, Julye! Love your coloring with the added pearl drops and those iridescent swirls behind her are the perfect finishing touch. Thanks so much for joining our ATG Challenge at Aurora Wings. xxD

Lovely card, thanks so much for sharing it with us over at Crafty Catz this week!
Hugs Donna (DT Member)
xx

amazing creation! She looks amazing, and those liquid pearls really adds the finishing touch!
Love those swirlies too btw!

Thanks for joining Aurora Wings,
hugs from DT-Laila

Love those swirls in the background, just perfect.
Thanks for sharing at Cardz4Galz

A beautiful image, great colouring, super background. Thanks for joining in the fun at Cardz 4 Galz. Caz DT.