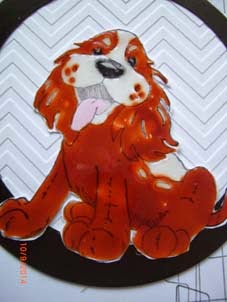 A  wuffly stamp from Sugar nellie at funky kits. I decided to make some cards that I could add sentiments to at a later date for whatever use and who doesn't love a cute dog.
I coloured this with crystal glaze pens think that's what they are called, just love the dimension it gives. I fussy cut the image and mounted it on a die cut circle which I embossed with a chevron pattern using an embossing folder from diesire. I over-layed this with a black diecut circle that I'd tried to cut a circle from the center of but it went a little wrong but the off center mistake I thought worked well for this card. 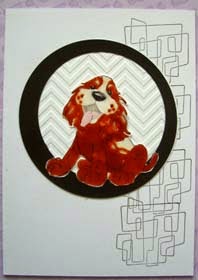 The base card I decided to keep simple by just adding some retro stamping .

Hi is such a cute character & I love the retro feel to your card, thanks for joining us in the SugarBowl :-) xx

What a super image Julye and beautifully coloured.

Thanks so much for joining in at Stamping Sensations challenge this month.

Darling doggie! Thanks for playing with us at STAMPlorations!

Suca a cute card. Love this image. Thank you for sharing your wonderful card with us at Stamping Sensation.
Eret x

What a cute pup and doesn't he look happy, happy, happy!
Thank you for joining us at The Sugar Bowl, good luck in the challenge and I hope you will be back again.
Marilyn

He's a cute little pup and beautifully coloured,like the offset circle Thanks for joining us at Stamping Sensations this month

Cute puppy. Lovely card. Thank you for joining us at Creative Knockout this week. Judy DT

Super cute. Thanks for joining us at Zuri Artsy Crafty Challenge