I have been so inspired by the different uses of dies and although I know there are many on the market and although I haven't found them yet am sure there are many blogs that show how versatile other die brands are I found memory box and poppystamps dies and blogs and am in awe as to how their design team use dies to make some of the most gorgeous cards and projects.

I am still learning and enjoying every minute and am trying though often unsuccessfully to incorporate stamping with die cutting but this project doesn't include stamping just one of my other loves sparkling colours in the form of mica pigment inks.

I was inspired by the cards that Olga created with the spiders web die and Marybeth's  and Yoonsun's majestic maple leaf cards so when I managed to get my inky fingers on these dies I had to play and this is what I came up with.

I cut several majestic maple leaves and although maples I think they could easily pass as sycamore leaves too. I used mica pigment inks from moonglow to randomly add splodges of various reds,browns and green shades and left them to dry.

I used the spider web dies and cut out in white vellum and used some clear dimensional glue to add water droplets as though morning dew to the joints of the web and again left to dry. 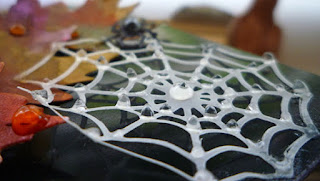 I gently curled the leaves once dry to simulate dry crunchy leaves found fallen from trees in autumn and then added more of the 'water drops' in places they may collect on the leaves. Lots of patience required as again they had to sit to one side to dry. 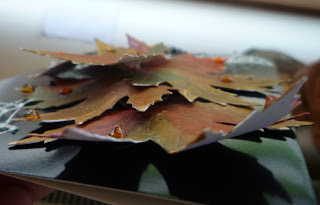 What would webs be without a spider so I cut one coloured in black  promarker and added a black half pearl to the body for added dimension.


The fun bit was adding all the elements to a card, I tried white as a base but that just didn't look right so I opted for black as my base card , it just adds to the drama and shows the leaves colour and webs off so well.
I gathered the leaves together and from a low height dropped to my desk to get a random grouping and then used hot glue to stick them to the card in a similar pattern keeping the dimension.
The webs I tried to make them look like they were suspended between the card edges and the leaves and then just placed the spider appropriately.

Not sure what occasion I would use this card for or where I could add a sentiment other than on the outside , maybe a retirement or gents birthday but for now I have it stood on the side in my craft room as I just like looking at it and definitely think it would be best hand delivered or posting might require lots of packaging to prevent squashing. 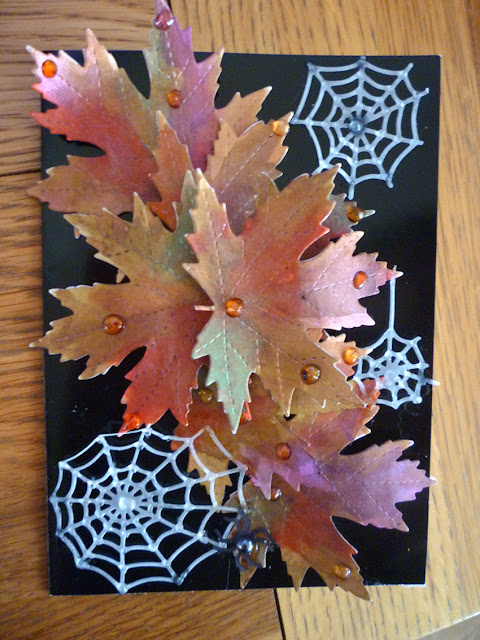 I would like to enter this project into the following challenges;-

MAWTT - all kinds of everything
( mines early morning dew)

Crafting from the heart - anything goes

craft your passion - always anything goes

crafty card makers - layer it up

Thanks for sharing your really beautiful card with us at MAWTT. It reminds me of going out into the garden and seeing the dew or mist sparkling on the leaves and spider webs. This is terrific. Good luck and we would love to see you again. Christine DT x

Wow, quite unique, thanks for joining us at MAWTT this time, xxxx

Totally clever and would have been great fun to make. Thanks for entering at Unstampabelles.

Awesome, love this card and all the dimensions/layers. So beautiful! Thanks for joining us at Crafty Cardmakers and hope to see you again!

This card does not look like someone new to die cutting. Love the way you used the leaves to create wonderful dimension. The dew drops add a lot of interest. Very nice card. Thank you for sharing your design with us in our Layer it Up Challenge at Crafty Cardmakers!
:) Pam

Wonderful concept and you executed it beautifully! Thanks for Rocking with us this week at 613 Avenue Create!
Hugz,
Chana Malkah Harris, Owner

What an amazing card.You've done a wonderful job with you inks and 'dew' droplets to create a realistic effect.Thanks for joining us at Craft Your Passion.Hope to see you again next week.
Lisa x

This is wonderful. It is so clever and beautifully executed.
Glad you dropped it onto the front porch at 613 Avenue Create.
Hugs Sheryl DT member xx

Gorgeous colouring of the leaf dies. Thanks for sharing with us at Unstampabelles.

loved the tone on the leaves. Thanks for joining us at Unstampabelles. Good luck