I am loving the world of die cutting, it brings another dimension to card making and other crafts though as yet I haven't ventured further than cutting card and paper.

I haven't really had much mojo lately when it comes to crafting I guess too many other things causing distraction but now I have redecorated my craft room and refurbished it I thought as I found all sorts I had forgotten about when moving things around I really ought to try and find mojo and get card making again.

I decided to start off  with something bright and colourful and just die cuts using promarkers to colour my white butterflies ,flower centres and to use on the sentiment stamp. 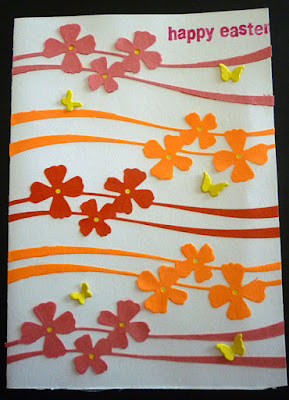 I cut the petal ribbon die from poppystamps several times in different colours, I think they had a similar design on their blog when the die was released but I can't find it so I'm not sure who made it but unless I was dreaming it obviously made an impression so thank you to the designer.

I went for a kind of ombre pattern or mirror image whatever you want to describe it as and chose a coordinating colour  promarker to use for the sentiment which is a simple happy Easter .


I would like to enter this card into the following challenges;-

Inspired by all the little things - celebration (hope Easter counts)

That's crafty - flowers and or foliage

Beautiful. Thanks for sharing at Craftaholics R Us.
~Owner/DT Janis

A fabulous card. Great die-cuts and wonderful colours.
Thank you for joining in with the Crafts Galore Encore April Challenge “Anything Goes”. Good luck x

Fresh and Lovely! Thanks for playing at Inspired By All the Little Things:)

Very pretty! Thank you so much for helping us celebrate our 50th challenge over at Inspired By All The Little Things!

Beautiful card! Thanks for joining us at Unicorn, Claire DT x