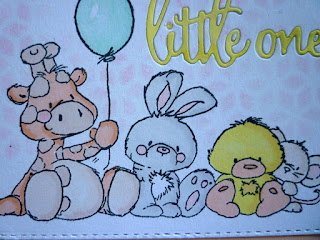 I decided I would start to build my card stock again and as it's Spring and there are babies being born in the animal kingdom I decided to start with a baby card. I don't need a baby card as I don't know anyone having a baby so thought I'd make it a general baby card not gender orientated hence the colours.

I love this sugar nellie image it's just so super cute.I stamped it onto white card and coloured it with promarkers in peach, almond, putty, lemon, grey and pink and a touch of mint for balance. 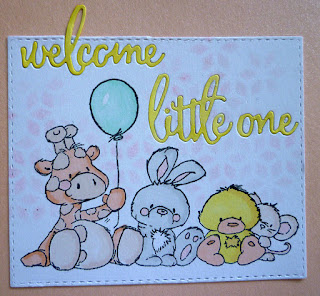 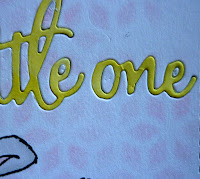 I die cut it out using a stitched rectangle die from memory box but decided it was too long so I cut it in 2 halves to shorten it. I then used their alter star collage die cut into card and used this as a stencil and used spun sugar distress ink, after masking the coloured image.

I decided to use a peach pearlised base card and keep the card design simple and complete it with a die cut sentiment 'welcome little one' from poppystamps. I coloured it in lemon and then cut it out in the rectangle with the image on and inlay it. 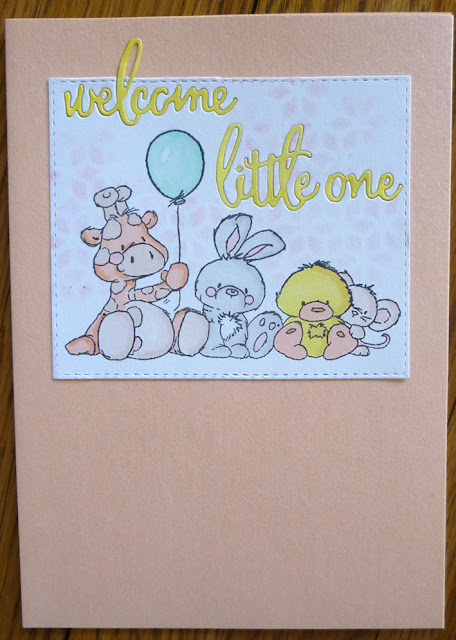 I was quite happy with the results and now have a card in waiting should someone announce they have had a special delivery.

crafty catz - anything goes with a twist of animals

AAA- CAS and use a stencil

Addicted to stamps -not a square(hope rectangles are ok)

CAS mix up - stamping,inlaid die and your choice(I choose stencil)

Hi Julye. Your baby card is SO ADORABLE!! Love those adorable images and great colouring!! The stenciling in the background adds lots of depth and is so pretty. And I like the way your inlaid sentiment goes outside the box just a little. Thanks for sharing with us at CAS Mix Up!

I hope you get to give this baby card soon because it's much too sweet to languish in a box! Love the soft coloring with the pretty, yellow, inlaid sentiment! Thanks so much for sharing this with us at CAS Mix Up!

Such a cute card and a great stencilled background. Thanks for playing at AAA Cards.

Oh what a sweet Baby card, Julye! Those little animals are just adorable. Thanks for joining us at Creative With Stamps this month.

So much cuteness and clever techniques here. Loving your inlaid die-cut sentiment, adorable little cuddlies, coloured brilliantly and the delicate stencilled detail behind. Great idea. Thanks so much for playing with us at AAA Cards this week. x

What a stunning card. Love the way you have showcased the image. Thank you for sharing your talents with us over at Crafty Catz. Hugs Nina

what a sweet baby card Julye! Love the cute images and pretty inlaid die cut sentiment! thanks for joining us in the CAS Mix Up challenge! Julia xx

Hi Julye, you've made an adorable babycard. The sweet image is beautiful coloured and I love the inlay-technique.
Thank you for joining the challenge at Addicted To Stamps Challengeblog.
Greetings Miranda (dt-ATSC)

Hallo Julye...
I love that inlay idea of your sentiment and sweet to coloring in yellow like the duck there
sweet doll images
cute cute cute and lovely coloring too the BG sponging is perfect too
sweeet baby card
many thanks to joining with us at Creative With Stamps this month
hugs
Monika

Oh my goodness! What an adorable group of babies. Very sweet card. Love it! Thanks for joining us at the Creative With Stamps site. Dorlene CWS DT