Memory box under the sea inspiration 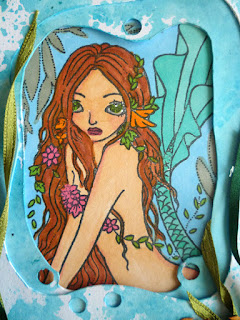 I used some Spectrum Noir aqua pens and smooshed some card with a mix of blues. I then used my craft knife to cut out some windows and then added some punched holes randomly , and layered them over over the image.
I finished the front of the card with a cute crab also from Memory Box coloured with promarkers and to add the look you get on a crab shell I used some PVA glue.


I created some weed by using some recycled ribbon ,the bits you get in clothes to aid staying on hangers and stuck at both ends but twisted them to give the appearance of movement.

Ching Chou Kuiks - under the sea

The ribbon girl -use any image

crafting when we can - one for the girls 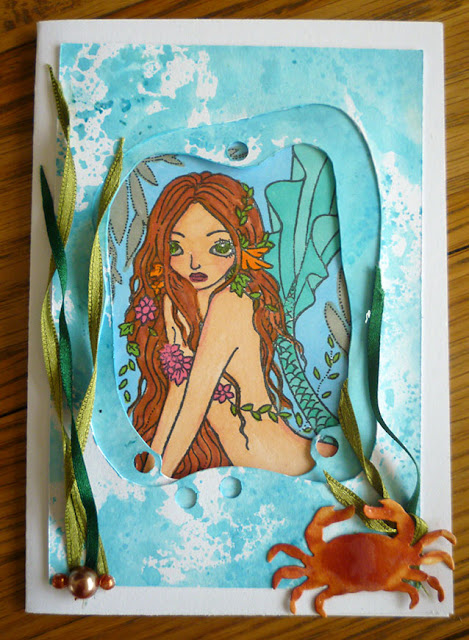 Such a sweet underwater world card.
Thank you so much for joining us at Polkadoodles Craft Challenge Anything Goes.
Hugs, Tina – DT
PolkadoodlesChallenge

Gorgeous, love the fabulous details, the ribbon seaweed is awesome ..& your colouring just beautiful .. thank you so much for sharing it with us at the Colour Crazy challenge xx

This is a fabulous card, such a beautiful image.
Thank you for joining us for our Anything Goes challenge at Polkadoodles.
Pauline
x

What a lovely card you have made here which fits perfectly the Ching-Chou Kuik Digital Stamps Inspiration and Challenge Blog Monthly Challenge this month of “Under the sea”. Even more FANTASTIC is that you have used one of Ching-Chou Kuik's digital stamps. Love the addition of the frames over the image. Lovely idea.

Thank you for entering, best wishes in the draw and for your support of this challenge. Kym (Ching-Chou Kuik Digital Stamps Design Team Leader).