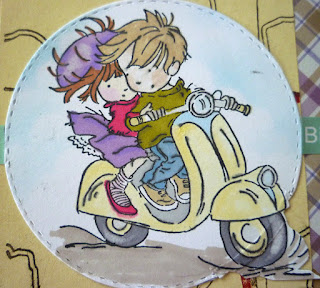 One of my nephews turns 16 this month and he's getting a scooter to ride to school so I thought this would be a fun card for him, hope it makes him smile in a good way.

I used a lily of the valley stamp and coloured it with promarkers.
I used a circle die but allowed some of the image to spill over the edge of the die cut.

I used a map stamp from a set from the Stampman , one of the first stamps I ever bought and stamped on cream paper colouring the roads different colours( not that you can see them) in hopes it looks a little more realistic. They live in a rural area so not many roads.

I used a kraft base card and some purple plaid paper to create the base layer and a printed sentiment I found in my stash that came from an ancient kit I got when first starting to card make, I cut it in half and attached to each side of the image. I finished the card with some peel-off numbers , well 16 is a milestone of sorts especially when it's you that's 16. 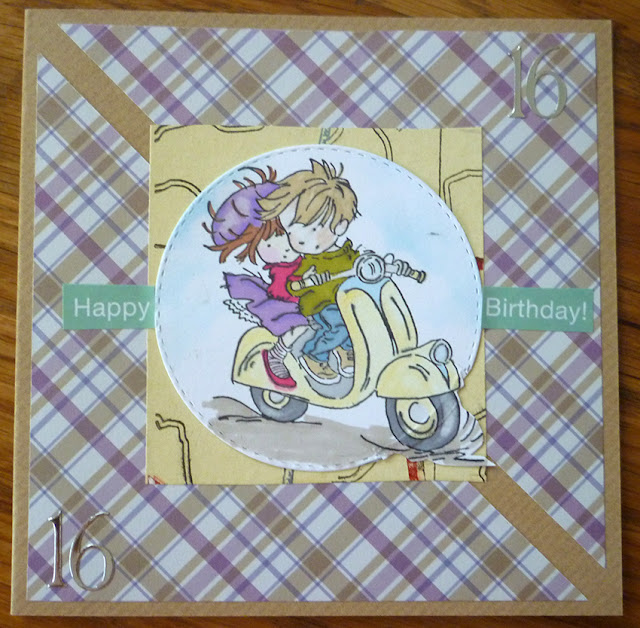 Dream Valley challenges - for the boys

Seize the birthday - anything goes

QKR - anything goes or pumpkins
Posted by Julye at 7:28 am

I bet he smiles at this! The perfect card for him with his new scooter. Thanks for joining in at STB~

Just the image for your nephew. Thank you for sharing with us at QKR Stampede.
Mary

Perfect card for your nephew Julye! Fabulous coloring and papers! Thanks for joining our weekly challenge at QKR Stampede!

Darling image, Julye, and I love, love, LOVE that plaid paper you chose! Thanks so much for playing along with us at QKR Stampede this week and good luck.
NanaConnie

Fantastic card! Truly beautiful!! Thanks for playing with us at Dream Valley Challenges!
Neva DT