It's always sad for those left behind when you have to say goodbye as they have left this world sooner than was expected in the normal run of things. One of my husband and sons colleagues sadly passed away towards the end of last year after a 5 year battle with non Hodgkin lymphoma , the sad thing was it was actually the last lot of his treatment that caused his organs to collapse but guess his time was up one way or another as he would philosophically said.
It was a wonderful service and as funerals go not that depressing as there were many who shared their happy memories of time they had shared with our friend and his family really appreciated how many people he had touched in such a positive way which they seemed quite comforted by. 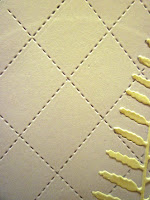 I made two cards one for his immediate family and one for his parents as I cannot imagine what they must have felt as we found out that when our friend was a teenager his sister had also died , so his parents had had the misfortune of loosing both their children untimely and before themselves.

My cards I created a background with a quilted effect on the first on lilac card using a memory box stitching line die and added another memory box die cut of a fern cut in ivory pearl card.
I mounted this on pearl lilac card with a stamped sentiment embossed with moonglow obsidian violet powder.
Quite simple but in my mind as it should be. 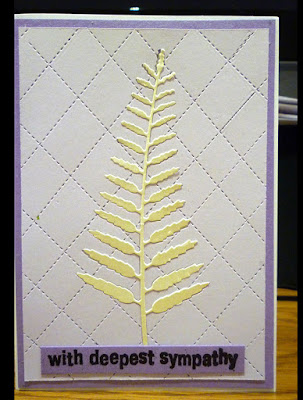 double D - leave it to me

Through the craft room door - anything goes

Simple and perfect! Thanks so much for joining in the fun at our Double D ‘LEAVE it to me!’ challenge! We hope you’ll come back often.

Beautiful and simple and perfect for a sympathy card. What a sad story about the parents losing both their children. I can't imagine the pain. Thank you for sharing your serene and lovely card in our Leave it to Me challenge at Double D.

So sorry for your loss. It is always tough to make sympathy cards, unfortunately we need to create them during times of sorrow, and this card is beautiful and I am sure it is appreciated. Thank you for sharing with us at Cardz 4 Galz - Chris, DT

as far as sympathy cards go that is fab. simple and light. thank you for sharing it with us at TTCRD and good luck, Theresa DT xx

Love the purple shades in this card! Thanks for playing along with CASology this week!

I always struggle with sympathy cards, but this is so simple and beautiful. Thank you for joining us at Cardz 4 Galz. Sian.