2 cards for a distant Dad

Well Tenerife is a fair distance from th UK. Hubbies parents retired to Tenerife earlier this year after alot of deliberation and eventual persuasion they finally made the move permanet. They have had an apartment there since hubby was little and were spending months at a time there coming back for a month and then going again, it just seemed silly so last christmas they made the decision to move there permanently. 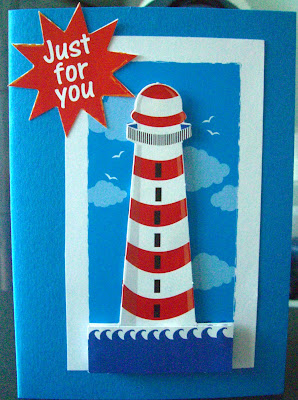 Fathers day is looming in a couple of weeks so thought I best get a card made and my wonderful son decided he wanted to send his granddad a card too. He didn't like the idea of messing stamping , well no he likes stamping but not colouring as his cerebral palsy affects his fine motor control and when he goes over the lines he gets frustrated with himself. I found some images and pop out die cuts from a magazine freebie which he liked and with a little help with the fiddly foam squares and positioning he came up with this.


Not bad for a 16 year old boy who says he's just not into arty craft as he's rubbish at it. His disability frustrates him so, I think he just says he doesn't like things he can't do as he wants to beable to and no amount of praise seems to move him. Children at school are so cruel when they are ignorant as are many teachers and bullying comes in many forms. I know his secondary school art teacher has a lot to answer for when  she told him he drew like a five year old and ought to give up trying. I told him as he loved drawing he should continue, after all Lowry drew stick people and it didn't stop him. 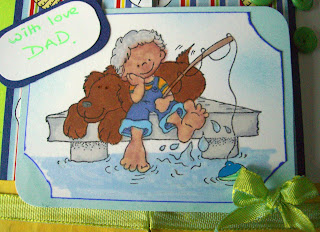 It's bouncing with rain here at the moment so a far cry from the sunshine summer hubby's parents have with their long hot summer, my card for hubby's dad has him fishing off the beach pier, though as far as I know they haven't yet aquired a dog. I used a High Hopes image coloured with promarkers though did have some fun getting the suntanned skin tone, not to look daft with Dad's grey white hair.

oops thunder and lightening too, hubby says got to unplug computer back later.

I am entering it for a few challenges listed below:- 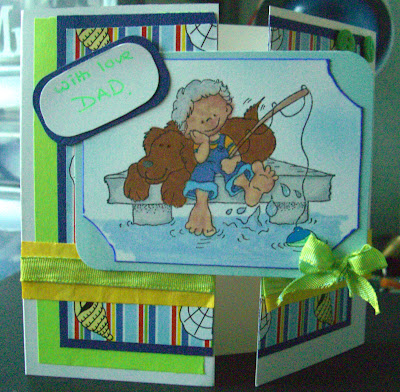 Simon says-father's day/masculine card
The Creative cottage challenge-father's day
Creative inspirations-beach theme (hope my beach pier is ok)
I love promarkers-2 different papers(patterned and yellow the others are card),3 buttons and 1 ribbon
Stampavie-summertime(now I'm not sure of the rules so this might not be enterable)
Papertake weekly-fun,fun,fun
Everybody art-summer
Moving along with the times-fab layout sketch(and they have a DT call too)
Totally papercrafts-more than one fold
High hopes-masculine card
Scrappy frog-summertime fun 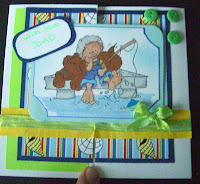 I can't belive my card fits so many challenges as I look through my little note book. Have to admit I set out with doing a father's day card as I remembered making notes of a few father's day challenges but had to make them anyway and decided to use the MAWTT layout but didn't plan further than that. I so love it when things just fall into place. To anyones challenge that I enter and have not adhered to the rules of number of challenges or right stamp all I can say is sorry and I will try and check as I enter but if I get it wrong please forgive me, I feel a little giddy with how many challenges I've found. Hope you all have a great day well whats left of it and thanks for dropping by.
Posted by Julye at 11:48 am

Lovely, thanks for joining us at I ♥ ProMarkers.
xx

oh these are brilliant and how lucky to live there. Thanks for joining us at creative inspirations

What a lovely, bright, fun card. Thanks for taking part at I ♥ Promarkers this week.
You son has done a super job too.

Brilliant cards, I love the bright lighthouse so summery! Thanks for joining us at the creative cottage challenge this wk hugs Rebekah x

Hi there I've just come across your blog & just wanted to say that your son's card is FANTASTIC, it really is. I have a daughter with cerebal Palsy but she has it severely so unfortunately cannot do anything. Tell your son he is great & should definately do more crafting. Take care

lovely bright card ,thank you for joining us at I ♥ Promarkers

like your summercard!
Thanks for joining EAC!
Hugs, Alex

Ah both cards are great, You tell your son its brill from me!!! i know what its likew with a kid with disabilities. My Jake has ADHD and Fine motor issues too! Other kids and Adults can be so cruel!
Thanks so much for joining in with us on MAWTT this week Hazelxxo

these are both fabulous i love the light house and the gorgeous colours on both cards. Thanks for joining us at The Creative Cottage Challenge. Tracy x

Oh these cards are so adorable. Love the image with the puppy.

That's one of my favorite images...great card design! Thanks for playing the High Hopes challenge!

Great cards! I love the High Hopes image...so cute and beautifully out together. Tenerife sounds lovely...oh just to have a bit of their sun!!

Hi Julye
gorgeous cards,luv the little boy image, great fold, thank you for joining us at Totally Papercrafts this week, hope to see you next week, sue,x

My name is Wynneth said...

So nice! great colours :o) Thanks for joining us on I ♥ ProMarkers this week.
hugs
wynneth
x

Oh what brilliant cards, love the lighthouse and the sweet image in the second one.
luv
Debby

Cute card, and well done to your son for his too, it's great. Thank you for joining us at I ♥ Promarkers this week
Ruth x

oooooh how nice for your parents in law, gorgeous cards! thanks for joining us at tpc

Thanks for playing along this week with TPC.
Anne x

Awww fabulous card & I love the way you have used my sketch. Thanks for joining in with our challenge at MAWTT xx Clare x