A change of project

Yesturday and today (edit now 2 more days have past, where do the hours go?) whilst my son has been doing his exams in our kitchen and I have been banned from the room I decided I'd do some crafting but couldn't decide what to do. I thought I'd have a change as I have quite a few scrap books still to do for Andrew though have to admit as he got older he became more camera shy so there are fewer photos for each year.

I am up to 2005-2006 his final year at primary school and first at high school. I am part way through and the pics won't have much meaning probably to anyone but his close family. Andrew calls his scrap books his legacy and he wanted them as a way to remember things he's done and been to so in later years he can show his family. I think if he has children they will find some of the photos and stories as amusing as we did at the time if not more so and though Andrew isn't embarrassed now I'm sure he will be as he gets older.

I decided as a challnge to use a couple of challenge layouts just for a change. My scrap pages are usually quite plain as I normally don't want to distract from the images soworking to a layout was a challenge in itself. I have to say I found it daunting at first but quite enjoyed the second.
I am not saying which order I did the layouts in as that reveals which I found more of a challenge so I will do them on this post in the order I have the layout challenges in my note book. 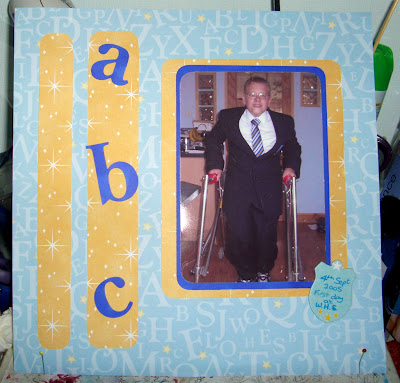 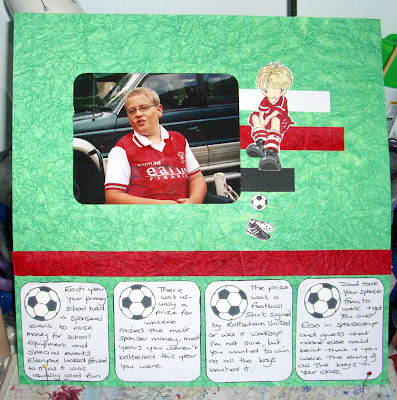 I had intended the other page I did to enter the pink elephant as that was the layout I used but I have missed that deadline but never mind, I can still enter it for Easy craft challenge as thier theme is green and that is my predominent colour all be it just the background. I used this fab stamp from sugar nellie , the wee sports manga boy he just seemed perfect for this page. The football stamp is from a sheet from the stamp man the papers just from my stash that I seem to have had forever.

Well missed challenge or not it's another 2 pages done. The weather is still miserable here and Andrew has another english exam this afternoon and I still have another couple of posts to finish before I have to unplug everything for his exam. The only good thing about being banished is that I get chance to do some crafting  as even the tv in another room would be a distraction and I find it easier to knit which is my other option for me time when I have the tv on so I may have more to share ovetr the next couple of days.Thanks for dropping by and keep smiling afterall we could have snow!
Posted by Julye at 10:13 am

Awesome layouts! I love them... and am sure the memories mean a lot to both of you!

Thank you for participating in the Crafty Ho's Challenge this week!

I'm getting all teary at the sweetness of your gesture and the thought that your son and his future family will have these wonderful memories! Thanks so much for working the corner with The Crafty Hos! :D MWAH!

This is a fab layout hun thanks for sharing. Thanks for joining us at Craftalicious for our first challenge. luv gina xx

Great layouts & lovely pictures, love your "take" on our New theme too!

Thanks so much for joining our first challenge at Craftalicious

Thanks for joining us on SCSC :)

Super layouts, you have been busy. Thanks for joining us on our very first challenge at Craftalicious. Hugs Tracy x

Great pages, so thoughtful! Thanks for joining the Crafty Hos this week! Hope you''ll be back next week! :)

Love the layouts! You did an awesome job! Thank you for joining our first challenge at Craftalicious.
hugs, Diana