Well that's another of my son's exams over , 75% done and only 4 left now then no doubt he will start to fret over his results and what he's doing next. 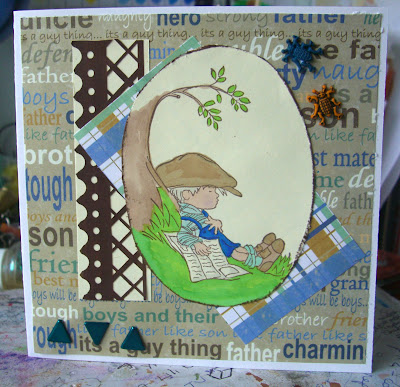 Well I have managed 2 cards, being banished whilst he does his exams has its perks. The first is another card for Andrew's other granddnd, he didn't make this one just picked out the stamp image and the colour scheme, have to admit I don't know if he likes it as I haven't shown it to him yet.

I am planning on entering this card into the following challenegs:- 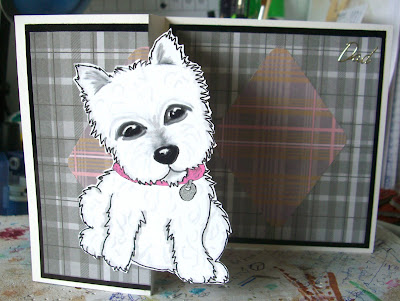 My second card is for my Dad who is in lovewith my sister in law's dog Simba . She is a cheerful westie who doesn't think she is a dog at all but my sil's baby. Dad and mum dog sit a couple of times a year and dad reall looks forward to it though he won't admit it. We have all offered to buy them one of their own but Dad says no as it wouldn't be Simba. I got this fab digi from sj's little musings and thought it would be perfect for Dad's father's day card so thankyou to SJ .

I plan on entering this card into the following challenges:-

Fabulous cards Julye, love them both. Thanks for joining us at Cards for Men, good luck with the challenge. With hugs Shirleyxx

These are just adorable Julye. Thanks for playing along on PCC this week.

2 super cards, great use of the sketch on the 1st one!
Thanks for playing in The Pixie Cottage this week :)

Oh how cute both your cards are! I especially love that little pooche - the way you cut it like that is so clever! Thank you for taking the time to play along with us at Tellen's Place this week! :-)

Such a ca-ute Westie digi image!! :) Thanks for joining us at KL Stampin N Scrappin for our challenge this week. :) Kel

Such a sweetie image and great card. Thanks for playing at the Pixie Cottage.

Fabulous cards Julye. I do love the little westie though.. its made a very classy card.

Thanks for playing along with Cards for Men this week, and good luck in the challenge.

Very sweet Card.
Thanks for joining us at the SimonSaysChallenge this week.

What a beautiful shaped card! Your image is adorable and your detailing is spot on! Thanks for joining us at KLSNS!
hugs
Risa:)

Wonderful cards, love your layout. Thanks for playing with us at Cards for Men. Good luck on the challenge.

Both cards are great! I especially love the dog card. Thanks for playing with us at Tellen's Place!

These are such amazing cards! Love that little doggie and the subtle use of the word Dad. Thank you for playing with The Pixie Cottage this week.
Hugs
Tanya

Both cards are darling. Thanks for joining us for our challenge this week at the Pixie Cottage.
~Pam

Great cards Julye thanks for joining in at CCC