My son has cerebral palsy and finds it extremely difficult to walk more than a few feet with a walking frame on a good day, but at present as he is waiting to have his baclofen pump (medication that reduces spasms and severe pain in his legs ) revised as the first time round (last July) the tube that delivers the drug in his spine didn't stay where it should have after 3 weeks , but hopefully he won't be waiting too much longer.

Consequently he has a blue badge so we can park in disabled bays and have extra room to get him in and out of the car and he can use his wheelchair to access places.

I made a case for his badge some years ago but it had become a little worse for wear and he said it needed replacing.

I thought something a little more masculine was in order well he is nearly 22 now, so used some craft cork sheeting I bought ages ago but was never quite sure what to use it for. It feels really squidgy and smooth so used this for the outer cover and hinged the two sides with some craft foam in brown.

The inside has 2 windows made from recycled packaging acetate which I scored and folded and stuck to some silver mirri-card so the lips were on the back of the card before I sandwiched them between the card and the cork. I should say the foam was also part of the sandwhich.

My son says the silver card is a bit much as it will reflect when the sun shines on it but I had to have a bit of bling.

I decorated the front of the holder with a die cut from a poppystamps die and a stamped image of a pussy cat coloured with promarkers in colours similar to his cat. 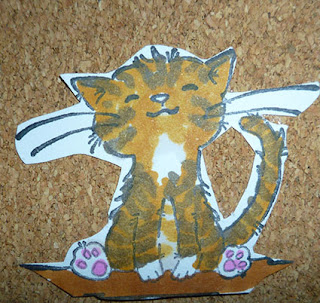 I am loving these Itty bitty bumblebees from memory box so simply had to add one especially as his cat loves to chase bees in the garden when she sees one, I'm sure she will get stung if she ever catches one. 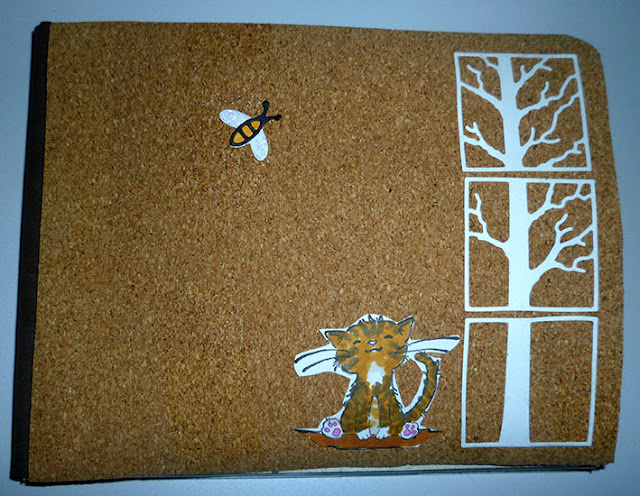 I would like to enter this project into the following challenges:-

fantasy stampers -in the springtime

eureka -spring is in the air

shopping our stash- for the big and bigger boys

a beautiful mess- anything goes

kraftin kimme march krafty skrappy -anything but a card

crafting with friends - anything goes

Hey Julye - what a great idea for your son's badge! I love the three-part tree silhouette. Thank you so much for sharing your project and creativity at 613 Ave C!
~ginny, DT for 613 Ave C : [ ATG / Use a Bird]
Owner: RubberMAD (GettyCollection.com)

Thanks for linking up over at 2 Creative Chicks

All the best to your son. You have created a great masculine looking holder for his permit. The idea of using cork is good! Thanks for entering the Eureka Stamps challenge this week.

What a great idea. Love how you used the fun dies on the outside too. Will make it a lot handier for your son to have these cards in a new case.

Great project! I love projects that are well crafted and utilitarian. Your projects fit both to a tee. Great job, Mom. Thanks for sharing this wonderful project with us here at Shopping Our Stash!
Hugz,
Chana, DT

Awesome!! A fantastic AND functional project!! Thanks for playing along with us at SHOPPING OUR STASH for our "For the Boys" challenge this week!

Super cute!!! Thank you for joining us at TSB, good luck!!! Amy DT

What a great idea. Thanks for joining us this week at Eureka Stamps for our Spring is in the Air Challenge. Karal DT

Thanks for sharing your lovely crafting for Crafting in a beautiful mess challenge 1, Hazel, DT x

Great use of recycled materials and using a lot of stash items. Fabulous and very useful project. Thanks for playing along with the something for the big or bigger boys challenge at Shopping Our Stash.

What a great idea. Thanks for sharing with us this fortnight. Lisa DT Creative Craft Cottage

Your card is very beautiful !
Thank you for joining us at Creative craft cottage!
Good Luck and hope to see you again.
Bad Kitty's Craftroom

What a super idea, Julye - I love how you personalised the badge holder for your son, I bet he loves it. Thanx for sharing with us at Fantasy Stampers.
Hugz, Jan (DT) xx

Stunning card , Thanks for joining us at A Beautiful Mess Lisa DT x