I recently bought  Itty bitty bee die by memory box and they are just super cute, I had such fun making a whole swarm and you are likely to see them on many of my projects now. I coloured them with promarkers black and gold and used white iridescent glitter on their wings and they must look good as my son's cat kept trying to pinch them.

I found a card by shown below which is now on my pintrest board inspiration from others and wanted to do something similar and came up with this card below.

I used some purple pearlised card and embossed with die'sire flower folder and used this as a base.

I die cut letters using a sissix alphabet die and assembled the card using a bee instead of a Y in the word happy. 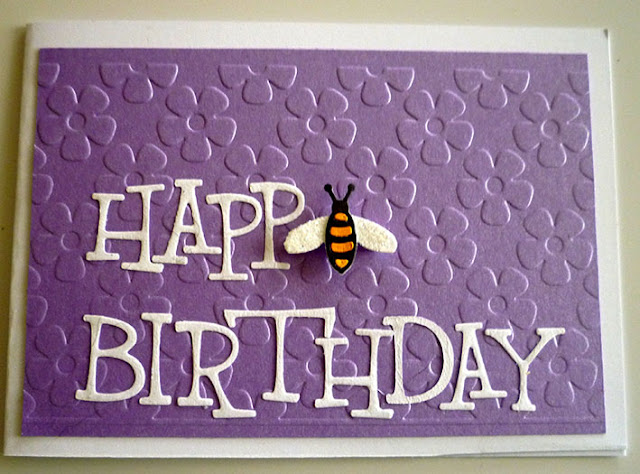 I know its simple but I think it has a fun element and although I used purple the same concept would be perfect for a guy too .

cute card thursday - to die for

Nice creations... love the idea with the bee.

Thanks for playing along with our Crafty Time Challenge for March and good luck!

They are Bee-uiful cards. Thank you for playing along this week at OSAAT. I sure hope to see you back again very soon. Good Luck in the challenge!!!

Clever and creative card! Thanks for playing with 4 Crafty Chicks this week! Nance, GDT

Super cute! I love the CAS style of the cards and the die cut is adorable! Thanks for joining us at CCT this week :)

Fun way of using the bee! Thanks so much for playing along at Seize The Birthday :)

Great card – the embossing folder you have used is perfect! Thanks for joining in at Simply Papercraft

To abstain from sin when one can no longer sin is to be forsaken by sin, not to
forsake it. See the link below for more info.