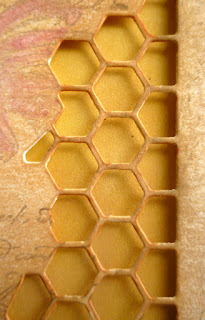 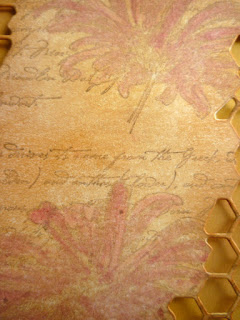 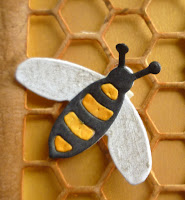 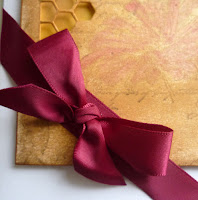 Again no sentiment as yet and although I thought it was just a pretty card my son says its a nice man's card even with the bow that adds to it.
I would like to enter this card into the following challenges;-

Hiding in my craft room - blending

The ribbon girl -any image

Craft your passion - always anything goes

crafting from the heart- anything goes 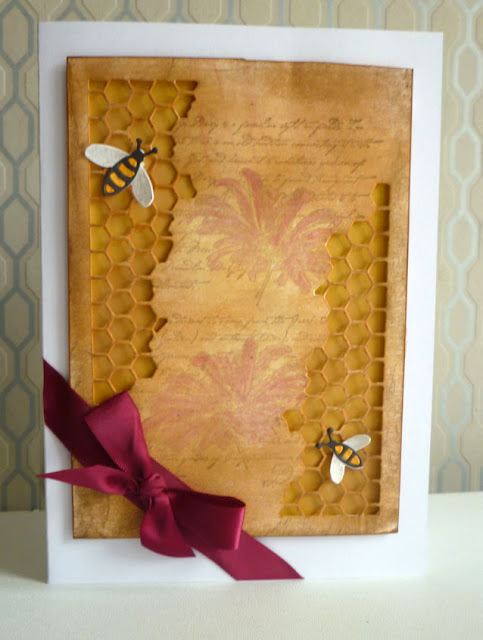 This is such a beautiful card, I love the honeycomb and bees. Thank you for joining us at the Ribbon Girl, good luck and I hope you will join us again.
Hugs
Gina xx
http://www.ribbongirl.co.uk/catalog/

This is just beautiful.Thank you for sharing with us at Robyn's Fetish Challenge. Marlene DT

wow---very cool! Such a beautiful card! Thank you for joining us over on the HIMCR blog!

What a great use of this die, and the color palette is perfect. We have some fat bumblebees waking up from their winter nap here in NC. Thanks so much for sharing with us at Really Reasonable Ribbon "Welcome Spring" Challenge!

This is beautiful, Julye! Your soft stamping almost looks like a part of the DP and I love the dimension with the honeycomb affect. Sweet little bees, too and the fabulous bow tops it all off. Thanks so much for joining our 2nd Anniversary ATG challenge at Aurora Wings. xxD

Wow!!! It's beautiful!!! Thanks so much for participating in our LEMON SHORTBREAD challenge!!! Can’t wait to see you participate again in our next challenge!!
Deanne at A Little Bit O’ Paper