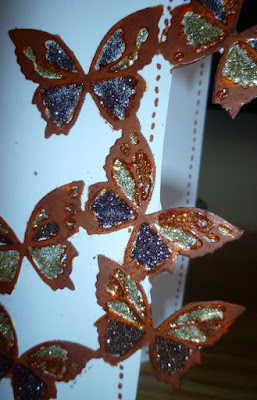 Happy St Patrick's day to anyone who celebrates.

My card today is a get well card for a gent. I know butterflies aren't normally a guy thing but I decided these pretty little brown ones would be acceptable by the male gender.

The die is from Memory Box and called fairyland butterflies and I did originally cut it from yellow card. I attached to a white base card and I filled in the recesses with different glitters working dark to light colours.

I decided I didn't like the yellow so I used the negative from the die cut as a mask and coloured the butterfly outlines with a brown promarker after the glitter had dried.

I wanted to make the card a little different after seeing a similar card on outside the box blog so drew a line across the card top to bottom midway across the card and then fussy cut around the butterflies on one side of the line and removed the white card on that half of the card also.

I finished the card with some hand drawn faux stitching around the front and inside of the card and added a get well sentiment by the dark room both with the same brown promarker I used to colour the butterflies. 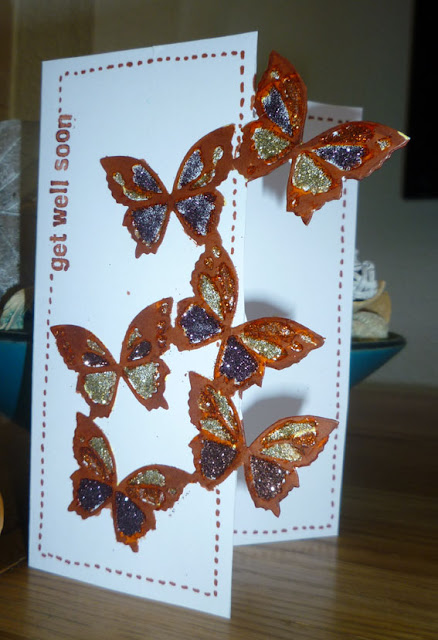 Left of centre-stitching real or faux

Craft your passion -anything goes

Crafting from the heart- anything goes

Try it on a Tuesday - Nature

You can't get any more nature inspired (I'm here from Try it on Tuesday) than gorgeous butterflies, whether for a man or woman. I'm sure he will be inspired to feel better soon when he sees this lovely card. I was impressed that the butterflies seem to be jumping off the card.

Julye this is beautiful
Thanks for join us at ScrapbookStampSociety Challenge.
Good Luck and hope to see you again

The butterflies look fantastic, this lovely card will cheer anyone up who may be feeling unwell. Thank you for joining us at TioT's this time.
Yvonne

Those butterflies look fantastic, your card will cheer anyone up who is feeling unwell. Thank you for joining us at TioT's this time.

The butterfiles are so pretty even if it is for a gent...lol Thanks for playing with us at TIOT.
Hugz, Z

Great card Julye. Love how some of the butterflies are flying off the page. Thank you so much for joining us at Left of Center Creative Challenges for Challenge 121 Stitching Real or Faux / LOC. I hope you can join us again for our next weekly challenge. AELx

What a lovely card and is sure to lift anyone's spirits.Love the cut away panel to allow the butterflies to fly over the edge.Thanks for joining us at Craft Your Passion.Hope to see you again next week.
Lisa x

What a great get well card! Love the butterflies! Thanks for sharing it with us at TioT this time.

Wonderful card!!! Thanks so much for participating in our LEMON SHORTBREAD challenge!!! Can’t wait to see you participate again in our next challenge!!
Deanne at A Little Bit O’ Paper

A wonderful Get Well card. I think the butterflies work perfectly. Thank you for sharing this with us over at Crafting from the Heart. Sue DT.

wonderful card :)
Thanks for playing along in the Artistic Inspirations Challenge.
Hugs,
Natalie
INKognito

Beautiful card! These butterflies are so cute! The colors you chose works great together - perfect for a male!
Thank you very much for sharing this wonderful project with us at FFFC. Good luck and hope to see you again soon!
Sasha