I've had this cute LOTV image coloured in for ages but just haven't gotten around to making it up into a card. I coloured it with a mix of promarkers and sakura gel pens and then fussy cut the image /die cut in a simple circle. 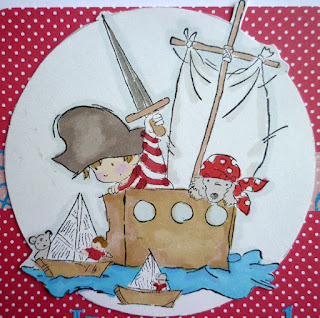 I decided I wanted to keep the card clean and simple in design and found the perfect layout in the challenge at the paper players. I used a piece of card that was the out-cut from an aperture card that was part of a kit I bought when I first started crafting from QVC think it was a kanban kit but not sure. 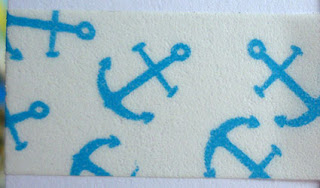 I finished the card using some washi tape that I bought when they first became a trend but have never used so I finally broke into the stash.I finished my card with a peel off sentiment.

I love promarkers - superhero/for a child

come and get it - nautical 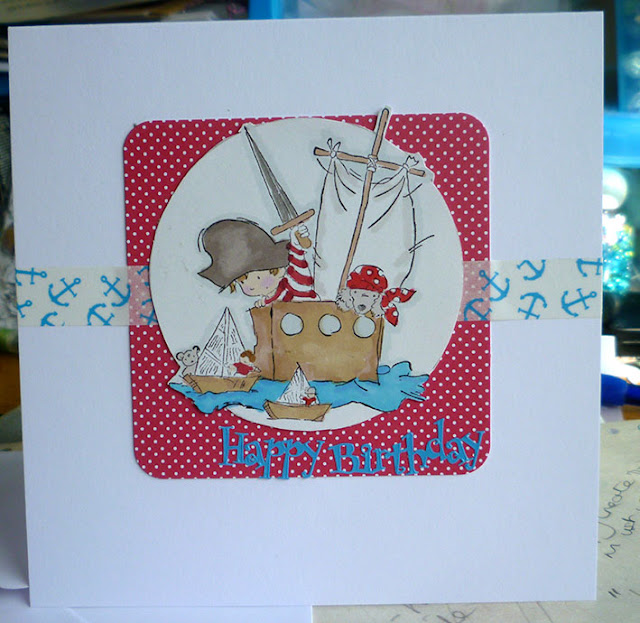 Oh super fun and I know a little boy that would just love the pirate theme. Thanks for joining in with AAA Cards 3rd birthday celebrations.

What a sweet little scene, so beautifully coloured - love the anchor-patterned washi tape too. Thanks for joining us over at The Paper Players this week!

What a fun card! I love the little pirates and the fun scene you created !So happy you joined us at The Paper Players this week! XX

Such a great card for a bit of fun. We hope to see you again soon at the Come And Get It challenges, CarolG

What a great Nautical card!! Love the washi tape strip....I, too, have a ton of it that I got when it was "the thing to have" and have used about 2" of it!! Thanks for playing along with us at Come and Get It this week!!
Susan DT

Lovely nautical card. LOTV images are all beautiful and this one is no exception. Great design and clever use of washi tape.
Thanks for sharing at I ❤️ Promarkers.
Hugs Sheryl DT members xx

What a fun and striking nautical themed card. Beautifully coloured and a superb idea. Thanks for playing along in our 3rd birthday challenge at AAA Cards this week.

Congratulations on your win at AAA Cards. Don't forget to email Jane to claim your prize.