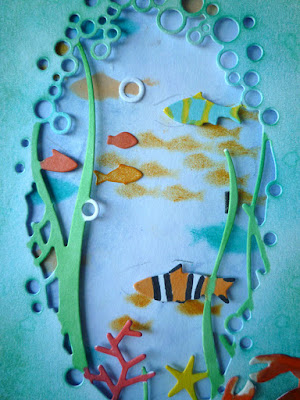 I was lucky enough to win this fab collage die in one of the memory box blogs blitz earlier this year and it really is such a fun die to work with. I cut the die on white card using a rectangle off cut to create a panel that would fit onto an 5 card with a couple of borders. I then used distress inks to  a piece of white card A5 size and used distress inks to create a  colour the outer surround of the collage using greens and blues so it would be slightly darker than the base I intended creating. The fish and weeds on the collage I coloured with promarkers. Don't you just love the bubble effect. My intention was to create a window effect as though looking into or out of a cave couldn't decide which it would be.

I then took another offcut of white card and marked the edges of the collage window lightly with pencil. I then again used distress inks and using the bits that pop out of the collage as a stencil I colored some fish on my base. I then coloured the 'water' with blue distress inks and layered this behind my collage. This layer not only formed my background but also a matting layer so 2 jobs done in one. 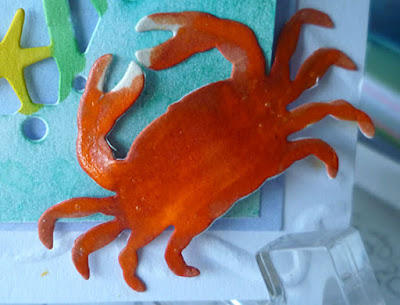 The card base I again used white card and a fiskars embossing board of waves to add texture and dimension and tie in with the collage too. I layered my images onto the card and added a friendly crab to finish off. My card was coloured with Promarkers and then covered in pva glue to give a shiny effect. I only used pva as my glossy accents seems to have dried up. 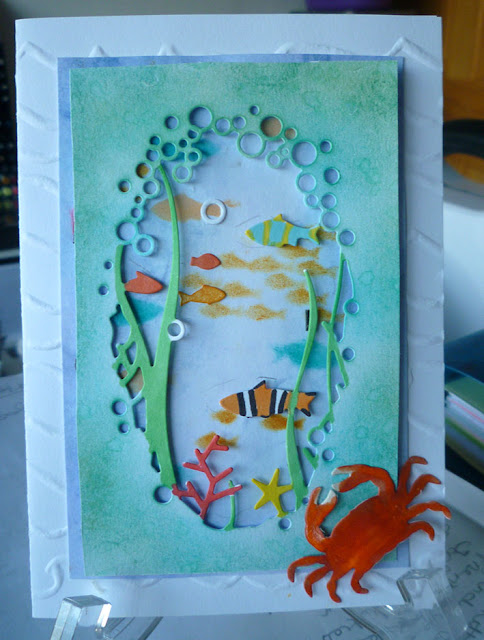 I love how it turned out and think it will make a great birthday card for my step brother next month as not only is it summery but has a crab on which is his star sign Cancer (only just thought of that).

Fab creation - I love the frame!

Thanks for playing along with our Do-Al(l) Kreatives Challenge and good luck!

lovely sea card thanks for sharing with Creatalicious Rachel DT

That's a great underwater scene in a beautiful die cut frame. Thanks for going down to the sea with the Daring Cardmakers this week.

Great card. I love your colour choice and the beach theme embellishments. Thanks for joining us at 'Do-Al(l) Creatives'. Jonnece DT

Great colour combo. Love the dies you have used.

Thanks for playing along with us at our present challenge at Do-Al(l) Kreatives and good luck! Hope you will join us next month again.

A beautiful creation and perfect for our challenge this week. Thanks for joining in at Daring cardmakers. x

What a fun card! I love that little crab in the corner. Thanks for playing with Just Us Girls!

Amazing! Wow, wow, wow! It's BEAUTIFUL! Thanks for sharing your talent at Penny's Paper Crafty Challenge!

Love the frame effect of the bubbly die cut, great card! Thanks for joining us at Daring Cardmakers!

This is such a cute card. I love the underwater scene you have created with all those die cuts and coloring. Your little crab is so stinkin' CUTE. Great take on the challenge, thanks so much for playing along with us this week over at Just Us Girls!

A lovely card!
Thank you soo much for taking part in our "anything goes with optional die cuts and/or punches” challenge over at Creatalicious & good luck in the draw.
Hope to see you again in our new challenge as well…