My son wanted a father's day card for his Dad and asked if I could make him one. His Dad has recently being doing some woodwork construction , he's made my son's cat an outdoor cat tree, a really nice big bird table and two bin storage as well as built my son 2 decking areas and a large pergola so my son thought something wood worky would fit the bill.

I had been looking at the workshop border from memory box so it seemed the perfect push to move it to the top of my wish list and treat myself to.
It is such a fun die I cut it  several times ,one in matt silver, one mirri silver card and then the tools with handles that are normally different to plain metal in neon green and yellow. 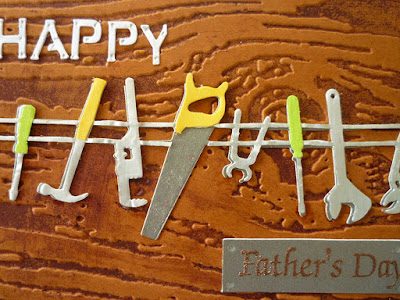 I created my background using an embossing folder  which I covered the raised area with brown ink before embossing on to brown card different shade of course. I cut this down slightly so it left a small white border when attached to a white A5 base card.

The workshop border I stuck across the centre of the card  making a landscape card.

I finished the card with a sentiment of course using an outcut from a poppystamps die happy birthday background. I attached the white letters using glue and to give the appearance that they were nailed there I used a silver gel pen to put dots to represent nails in appropriate places.

Therest of the sentiment I used a stamp and embossed onto pearl brown card. I originally tried heat embossing on the matt silver card but found that when I applied heat to the card it separated the plastic covering so I had to find an alternative. I stamed in vera mark and embossed with copper embossing powder. I again used the silver gel pen to add 'nails to the corners.

Have to say I was really pleased how the card turned out and both my son and hubby were also really liked the design too. 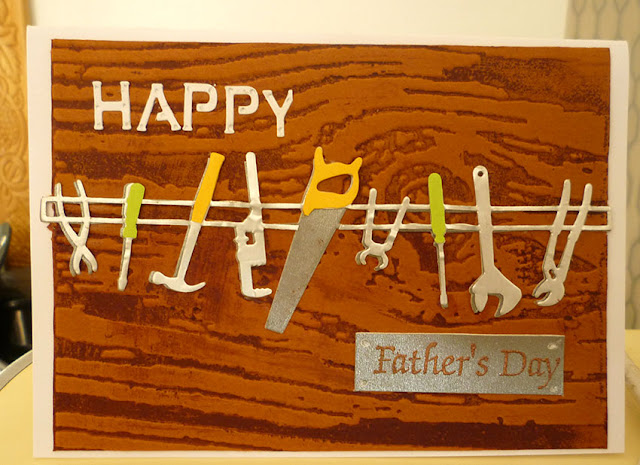 creative knockouts -for the boys

This is fabulous and I bet Dad LOVED it!! Thanks so much for playing in our ‘Celebrations’ challenge at Dies R Us! Please come back again soon!

What a great idea.. i'm sure it was very well received. Thank you so much for taking the time to join in with the That's Crafty *Keep it Simple* Blog Challenge.. Tracey x

Totally loving all of the tools you have on your Father's Day card and the awesome paper and layout you used. Thank you so much for sharing your incredible talent with us at Creative Knockouts this week.

What a perfect card for Dad! Love the design of your card & all the tools "hanging" up! Thanks for joining our "Celebrations" challenge at Dies R Us!

Beautiful card
Thanks for joining us at SCRAPYLAND challenge blog and good luck !
Maryvonne DT Member