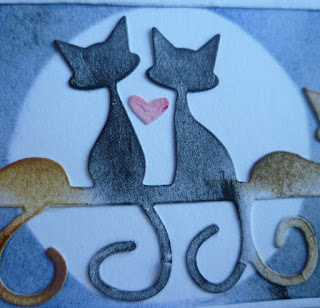 I often find it hard to come up with new ideas for anniversary cards as you can only do flowers and champagne flute so often and I'm not one for loads of layers and embellishments as a rule just not my comfort zone. When I bought this Penny black die I thought it would be perfect for an anniversary card for a change.

I cut a circle in post it note and used it as a mask so I could create my silvery moon and coloured the rest of the card with dark blue distress ink. I cut the cat die and trimmed the coloured card to fit behind it perfectly. 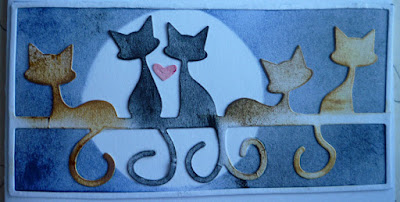 I used more distress inks black and browns to colour my cats leaving the border and sitting bench uncolored apart from the smudges from colouring the cats.

I added my double layer panel to a white base card and took a tiny die cut heart coloured  pink and placed between my two black cats. I didn't get as far as a sentiment as my son said he loved the card just as it was as we recently found a website with different celebration days and one was girlfriend appreciation day and he decided my card would be perfect as was for his girlfriend,so guess I'll have to start over. 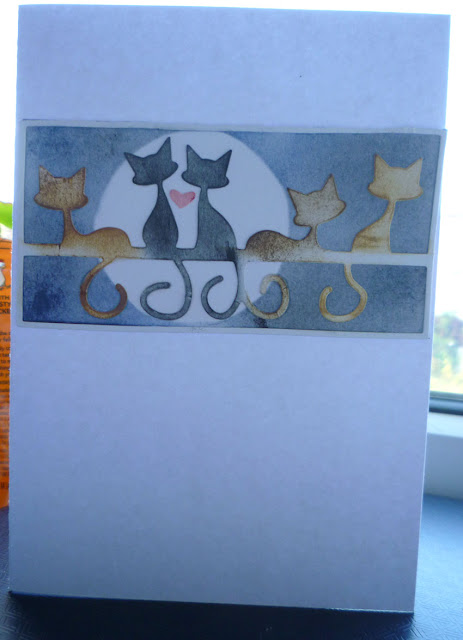 Use  your stuff - new beginnings

Penny Black and more - all creatures great and small

cardz 4 galz - cats and or kittens

This card is just too adorable. Love those cat dies. Thanks for playing along at Use Your Stuff - Gail

Super effect! Love those sihouette cats sitting out in the moonlight. Thanks for playing at AAA Cards.

This is a gorgeous card! I have this Penny Black die and would never have thought of using it for an anniversary card! It works so well! Love how you incorporated the masking technique into this card! Thanks for playing along with us at AAA Cards!

It makes a perfect Anniversary card and your background and choice of colours all work so well together, many thanks for sharing with us at Penny Black and More challenge.

I adore that die cut and you're right it's perfect for an anniversary x Thank you for joining in the fun at Colour Crazy Craft Challenge.

Beautiful card!! Good Luck with your entry.
Thank you for joining us at Brown Sugar Challenge!
Saba - DT
My Blog - Creative Paper Boutique

Cute card. I love it! Thank you for joinng us at Cardz 4 Galz. Sian.

I love how you have designed your card around these die cuts, clever and romantic. Thanks for sharing in our challenge at Cardz 4 Galz. Caz DT

Wonderful design! Thanks for joining us at Use Your Stuff.