Memories of the beach 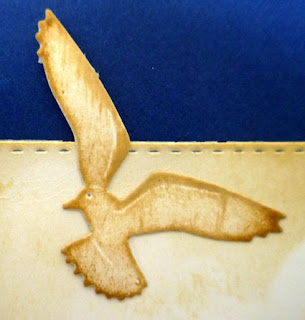 I used Joanna Sheen seagulls but decided I only needed to use one of them. I used impression obsession fence , a border die I got from amazon that was only a couple of pounds so thought I'd give it a try and the rest of the dies are poppy stamps. 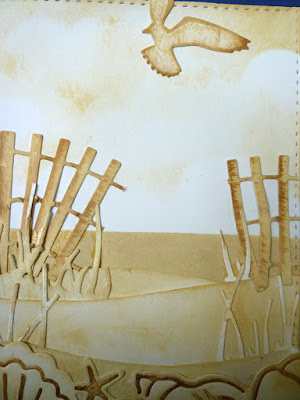 I decided to create a scene so my base card I cut a stitched rectangle and used a poppystamps cloud die as a stencil to create clouds , I used a post it to create a straight edge then intense colour to create a calm flat sea.

I then cut some rolling hills and grass also a poppystamps die and tinted the edges, I layered them to create the sand dunes. The fences  I coloured and then placed on the top dune but placed and stuck them so they looked a bit worn and dilapidated.

I decided to use the shell border as the front border for my card  I tinted the card and the strips that would probably normally be removed I coloured heavily and in-laid to add depth.

I wasn't sure what colour base card to put my scene on I tried white, kraft or a colour. I thought it would make a good guy card so used my guy (hubby) to ask which he thought looked better ,hence I went with the dark blue. I used a larger card so that added to the frame. I love how the seagull looks like he's flying off the scene . 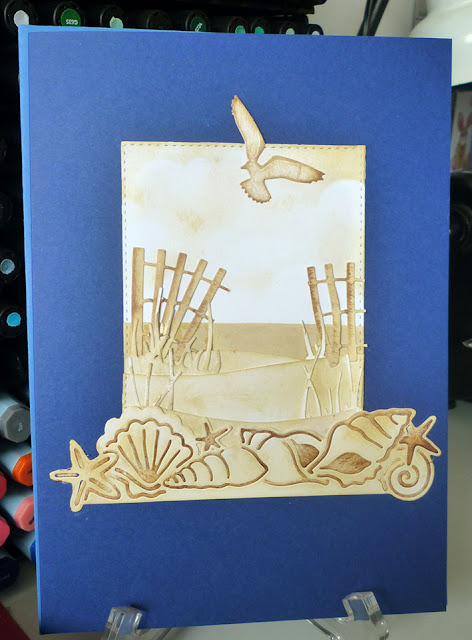 I would like to enter this card  into the following challenges:-

Deep Ocean challenges;- at the beach

come and get it - time to die

Fabulous beach scene! Thanks so much for joining in the fun at our Double D ‘Neutrals & Texture’ challenge! We hope you’ll come back often.

What a wonderful beach scene you have created on this gorgeous card! I love all the dies that you used to create this beauty! Thanks for playing along with us at Scrapy Land Challenges!

Such a pretty beach scene. Thanks for playing along at Casual Fridays Dies Only Challenge.

This is lovely!!! Thank you for sharing with us at Craftaholics R Us. DT Melissa

Cute! Thanks for sharing at Craftaholics R Us.
~Owner/DT Janis

Such a gorgeous card! Thank you for joining us at Penny's Challenges.
Mary (DT)

What an amazing card! I'm thinking that you have conquered the distress inks! Love the color scheme.

What a lovely dies composition! Love the monochromatic hues too. Good luck with our CAS-ual Fridays challenge!

Julye, you've created a fabulous beach seen on this card! Great choice of dies and your ink blending looks amazing. Thanks for joining the Double D, "Neutral with Texture" Challenge.

Such an adorable card! Thanks for playing along in our CAGI challenge!