Inspiration from my baby way back when

Well I decided I ought to stock up on some cards for occassions that always pop up when you least expect and then have to make a card in a hurry, or some one who never usually asks says have you by any chance got a .... card I could have and I have usually just used the last one I had . Sorry waffling, just tell me to shut up and get on with it , I really won't mind or take offence, at least you can't hear my squeaky voice , my sore throat seems to have gone but I still have no voice and thats since day after mothers day. I really hope it will be gone for a shorter time than last time which was 8 months, no joke and even when I had a laryngoscopy they couldn't see any obvious cause. Never mind though what will be and at least I have an excuse for not saying much now, funny how on here I ramble on when in reality I don't. 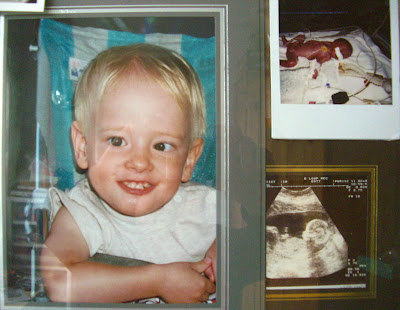 Sorry again, my card. I decided to flick through all the challenges and see what popped out at me, and there were one or two using pastel colours and some new beginings but non really helped me decide on a definite design, well until I read just scraps . They wanted a new beginings card in pastel colours but you had to say what your inspiration behind your design. That started me thinking ,if I were to do a new beginings in pastel colours I think baby card. That made it even harder, do you do boy or girl or general. What cute thing would you use, what would inspire me. There it was staring down on me from my wall a photo of my son, well him at about 18 months along with a scan picture and one of him within a couple of hours of him being born.(sorry about the reflections it's in a glass frame) His pictures made me think of his first toy bought by one of my colleagues who worked on the children's ward upstairs from special care where he was for the first 13 weeks of his life. That was a little black and white checked cow called Daisy, it said so on the tag and he loved her to bits. She went everywhere, greece, florida, cornwall, and the one time we lost her was at Sainsbury's where he had left her at the checkout with his favourite assistant. I didn't find out till bedtime when he asked for he and said the assistants name. Did I feel a fool phoning and asking if they had found a small black and white cow and the relief I felt when they said yes, collecting it before Andrew would go to sleep. She even had a few hospital trips too.
Well that was my inspiration. Needless to say I don't have anything that resembles daisy so my card just has an assortment of toys which all hold some significance to Andrew. The giraffe represents a soft sqeeky toy that he use to tease our dog with and she never took it from him but played his game of pretending to, I always said she was part human. The Teddy represents Teddy Gramps . My first step dad bought it Andrew when he was first born and at 12inches it was bigger than him. Alex my step dad adored Andrew as he had never had any children of his own and was so looking forward to being a granddad. Unfortunately he died in the august as Andrew was born in the April and so never got his wish. The duck well I'll tell you that one another time but he had a quacking duck too. 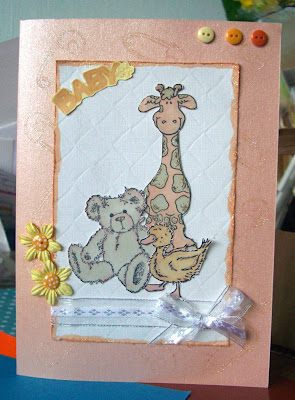 Enough babble , I'll list the challenges I am entering below to save your weary eyes from having to read too much more after all my drivle. I stamped in versamark and embossed with hologram powder nappy pins for a border. The re is more hologram powder on the distressed edge of the mounting layer and glitter pen over some of the images which are coloured with pastal promarkers and oatmeal. I added white and silver ribbon pale lemon flowers and papermainia mini buttons in the centres and top of the card. It sounds simple but took me ages to decide.
The layout is form Sketch and stash challenge but is inverted.
The pink Elephant-pastels
The craft garden-pastels
Simon says -distressingMy time to craft-new baby
Passion for promarkers-use 2 images(sorry hope it's ok I used 3)
Charisma-animal magic
Posted by Julye at 5:36 pm

Thank you for joining us at Simon Says Challenge this week.

Hi Julye, what a gorgeous card. The animals are sooo cute and your colouring is fab. I really enjoyed reading your post (and laughed about the cow being left in the supermarket - we've all been there lol). Thanks for joining us at PFP this week. Hugs, Denise x

Lovely card Julye, love all these cute images.
Thanks for joining us at PFP this week, good luck!
Hugs Tracy x

Awww this is adorable Julye, love the soft colours and the animals are adorable
hugs Mandy xx

Super cute animals on your card :) thanks so much for joining us at PfP this week :) Happy Easter.

What a pretty card!!
Thanks so much for joining us at Sketch and Stash!
Love Becky xx

Thank you for joining us at Charisma this week - good luck!

Hello Julye, So glad you played along at Just Scraps. Your card is beautiful and even more lovely is your story. Started me thinking about my son and some of his favorite toys - and here I am umpteen years later and watching that same little boy franticly looking for his little boys' toys. The more things change, the more they stay the same! Hope you come back and play again. We'll be posting a new challenge later today and would love to have you play along again! Have a great day and Happy Easter!

Such a pretty card.
Thank you for joining in the Sketch and Stash this time.
Cathy xx

Aw such a sweet card, adorable images. Lovely to hear about your inspiration...
Thanks for joining us at PFP and good luck.
Hugs Emma x