For a special couple

January starts a round of celebrations again in my family, there always seems to be something to make a card for, although from march to June things slow down and I have another quiet period from october to the begining of november as there are only one or two birthdays a month in these quiet periods.

In January we start with new year of course , then I have my sister's birthday and my son's godfather's birthday as well as some friends birthdays but there is also a special couples' anniversary, my mum and step dads wedding anniversary.
They were a bit sneaky when they got married (as some of my siblings and step siblings wouldn't have been too happy about the idea that they were getting maried at the time), so they told us all they were off on a cruise with some friends and only rang to tell us they were married after the deed was done. Thankfully all have now accepted that they make each other happy and we all get along. I am so glad mum found happiness and someone to share her life with, she deserves it as does my (step)dad who is the best dad I could ask for. 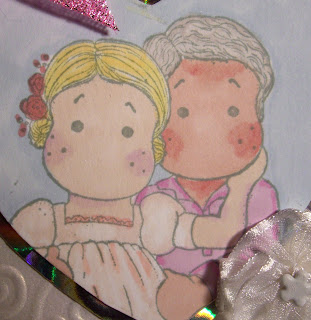 I made this card for them trying to be organised see, just got to put it safe but not that safe that I can't find it later. It was good to make something not christmassy , though I seem to be doing lots of WOW cards of late and this is another, but I do love the effect.
I used a Magnolia stamp but not the whole image and put it in a heart. I coloured in Promarkers using mum and dads colouring, hence the grey hair on dad. The embellishments I used ribbon and count the pink one as being on my image as it's attatched to the silver mount card. The white one is made into a flower just for something a bit different. 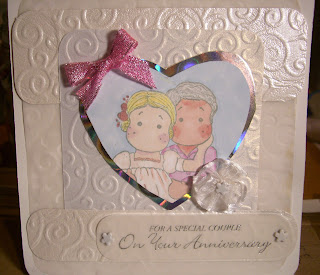 I decided to dry emboss all my base papers the same and used a fiskers board with swirls. I used white vellum as my main base as I thought this gave a soft feel to the card. I used pearlised leather look card for the cross bands which when embossed with swirls adds two dimensions due to the double embossed effect. The mount for the heart is pearlised paper so again a different texture. The ribbon flower I attatched with a white flower brad.The mirri card is actually recycled from a tissue box and has swirls on it , keeping in with the theme, not that you can see many of the swirls though. The sentiment is also recycled from a bought card and as it was silver on vellum it just seemed perfect. I attatched this with more flower brads. I thought it would be nice to do an easel card as I haven't done one for a while and because there was a fab embossed rose and some hearts on the other bit of the vellum from the recycled card and it seemed a shame not to use it. I embossed some more swirls around the hearts and flowers and used these on the base bit of the easel card with another strip of embossed leather pearl card. 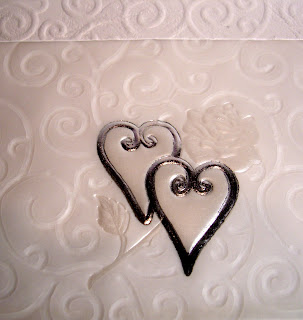 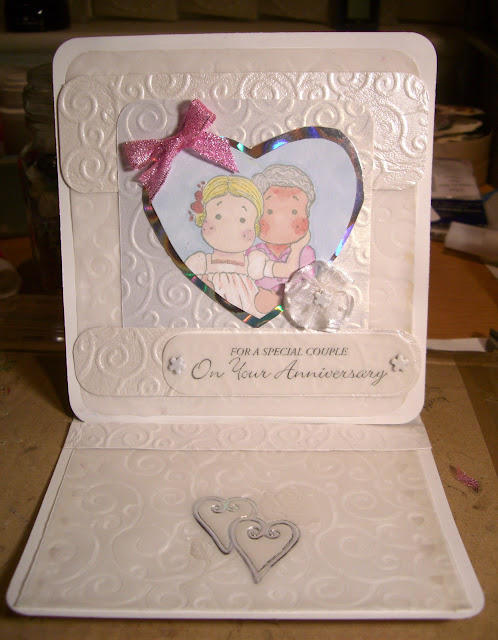 What a beautiful card. I love teh embossing. Thanks for joining us at Aud Sentiments.

Your card is lovely. I really like your shiny embellishments. Thanks for joining us at Tuesday Morning Sketches.

Hi Julye...what a darling card!! I love anniversary cards!! And this one is just sooooo pretty!! I love the embossing...and your soft colors. Your mum & dad will love it!! Thanks so much for joining us in this month's Inspiration Challenge at Magnolia-licious Challenge Blog!! Hugs. Pat Frank

Gorgeous card Julye :-) I am sure they will love this !!

thanks for joining us on the Papertake Weekly Challenge :-)
luv
Lols x x x

Beautiful paper. Love your card.
Thanks for joining us at For Fun Challenges. Good luck on the challenge. Happy New Year!
Hugs, Patricia

Pretty Anniversary easel card! Adorable image! Gorgeous paper! Thanks so much for playing along with us at For Fun Challenges. Hope you’ll be joining us for the next challenge.

Such a gorgeous card Julye. Love the image you've used and the design also. Thanks for joining our Mega Christmas Challenge at PFP. Hugs Michele x

Hi - a lovely creation love the embossing, and the the details! Thanks for sharing with us at For Fun!
hugs and blessings,
Pauline

Very nice Julye, thanks for joining us at I ♥ ProMarkers.
xx

Hi Julye, what a gorgeous card. I love the cute image and your colouring is fab. Thanks for joining in with our Mega Christmas challenge over at PFP. Hugs, Denise x
Have a wonderful 2011!

gorgeous card julye.the image is beautiful and i love the colours and embossing.
thanks for playing in our mega christmas challenge at PFP :D

Gorgeous card - perfect for the occasion!! Thanks for joining in our Mega challenge at PFP, Juliexx

Fabulous creation. Thanks for joining us at Crafts and Me for our challenge. A Happy New Year to you too. luv gina xx

What a beautiful card! The embossing gives it such an elegant touch!
Thanks for joining the Just Magnolia Challenge!
Hugs, Dena

Really lovely. Thanks for taking part at I ♥ Promarkers this week.

Hi Julie,
Oh I love the shine of your papers :o)
Lovely soft and pretty Anniversary Card!
I am sure your mom and step-dad will love it!
Thank you for joining us at Magnolia-licious Challenge Blog.
Happy New Year! Hugs, Candy

Love the card hun - all that shine!

Just reminded me to get that embossing board out again! Think I might have a session with it in my big shot

Thanks for joining in at Aud Sentiments too!

Beautiful card, love the colouring and layout. Thanks for sharing at Aud Sentiments.

I really think that is a lovely idea using the light background for a wedding card. Lovely card! Thank you for joining us at Magnolia-licious Challenge and hope to see you again for the upcoming ones :o)
Hugs,
Cabio