How much is that doggy?

I always use to feel sad for that poor doggy in the window as I listened to that song as a child they don't do nice songs with a story very often now but I like songs with a story, another favourite is the little boy that santa claus forgot, though I never quite understood it until I lost a little of the Christmas magic of who Santa really is. Enough rambling and reminising and onto a card.

Another fab and oh so cute Sugar Nellie stamp from Funky Kits and get your order in by 2 and Mark pops it in the post the same day fab service. 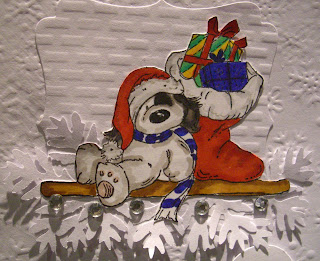 Anyway I was looking on their gallery for ideas of what to make for my 10 year old nephew, awkward age not grown up but not a wee boy either I do think 10 to 14 is hard as it should be called tweenager not teenager. Well saw a fab card and decided to use it as a base idea for mine so Sugar Nellie DT to the rescue and a great big thank you from me.

I coloured the image with Promarkers and cut it out added a bit of sparkle well it is for Christmas. I then used a Go Kreate die which I also got form Funky Kits and cut out a shape to mount him on and embossed it with a brick design. I then added some Martha Stewart punched leaves and mounted that on snowflake embossed paper. A few gems to finish and a tag and done, hope he likes it. 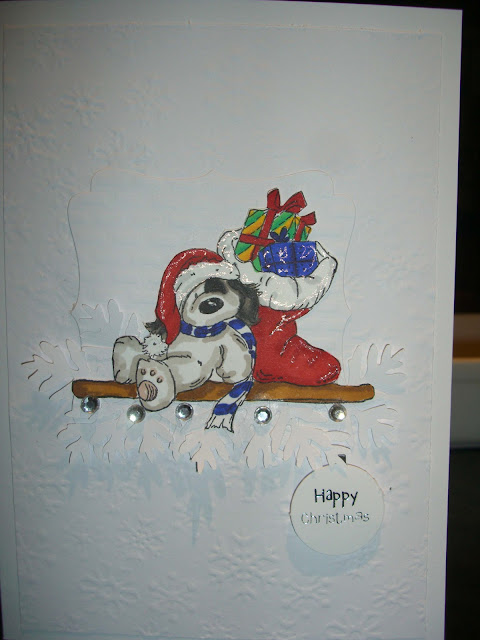 I'd like to enter this card into the following challenges:-
Creative craft challenges-anything goes
Tuesday throwdown-masculine holiday card
Forever friends -white and sparkles
Crazy challenge blog-stars and or snowflakes
Addicted to stamps-Christmas card
Dream Valley -sparkle
Here come the boys-for a man in your life
stamptacular sunday-anything Christmas
2 sisters-holiday
sweet stampin'-punches and dies
Posted by Julye at 8:55 am 15 comments: 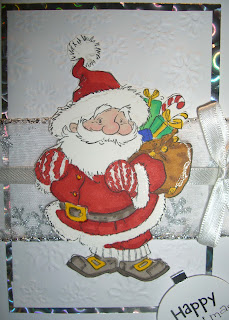 I realised the other day that there are now only a few weeks left till Christmas and thought I ought to start marking some Christmas cards especially since my mum has asked for some too. I spent my pennies at Funky kits and got this fab happy Santa which I thought would be great for my 7 year old nephew, I think he is just so cute though I could do with Santa sending me some fine Promarker nibs before Christmas so I can colour the details a bit easier, but we can't have everything we wish for can we.


I coloured him with Promarkers and decided on a white on white card. The base card I left plain but mounted Santa , after a little fancy cutting on some copy paper I embossed with snowflakes and then added a small piece of snowflake ribbon I found in my Christmas box(wish I knew where it was from and I'd get some more). I then added white satin ribbon and a bow. I mounted this on silver mirri-card and added a tag I won a couple of years ago, think they might be craftworks but not sure.A bit of sparkly glitter pen to highlight and done. 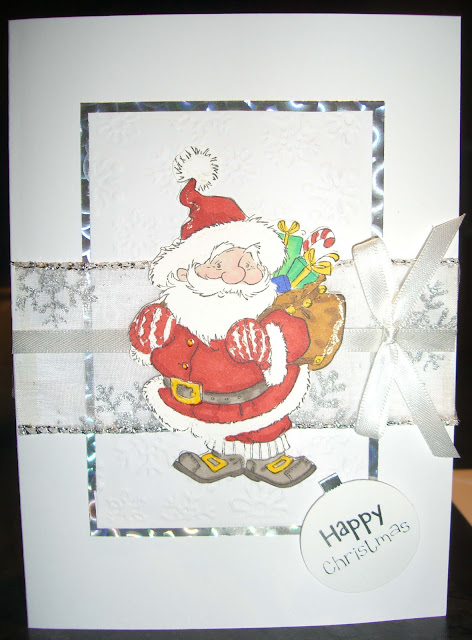 I would like to enter this card into the following challenges:-
The Sugar Bowl-layout theme ice and snow
cards and more - snowflakes
city crafter challenge-Santa is coming to town
everybody art-Santa
Ladybug crafts-WOW
Craft your passion-tis the season
Lexi's creations-one for the lads
Pollycraft-chritmas fun
Stampsrus-emboss it
Whoopsi daisy-WOW
Posted by Julye at 7:55 am 18 comments:

A card for the sugar bowl and other challenges

Morning all hopefully I will get time later to pop back and do this card full justice with details, but for now here is my card that I based on the sugar bowl sketch and patchwork theme. I made it just for fun and to try out my new martha stewart all over punch. 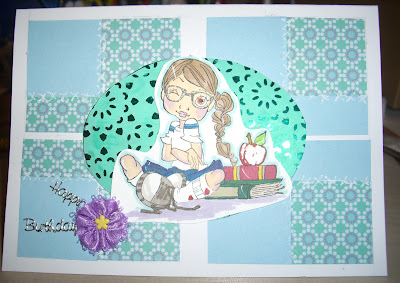 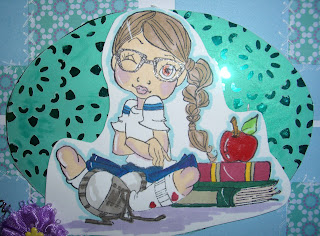 The ribbon flower I made and used a peel off greeting as foliage, and a brad for the centre. 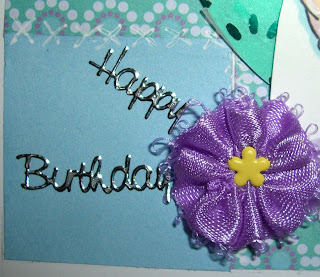 Edit time -the image is coloured with promarkers and the papers are from a scrapbook kit I have had for ever from QVC I think it might be K and Co but sorry if it's not. The stitching is done with a sakura white pen all on a white base card.
I would like to enter this into the following challenges:-
The sugar bowl- layout and patchwork
Hooked on crafts-dies and/or punches
crafting when we can-female birthday
dream valley challenges-stitching
Stamptacular sunday-use a punch
Posted by Julye at 6:46 am 4 comments:

Morning peeps a quick post whilst son is still in bed before school and I have a day of decorating ahead, well starting to decorate the kitchen anyway.
This card is for one of hubbies colleagues as it's his 40th birthday at the end of this week. I usually find it easy makeing masculine cards but it's harder when you have little info about the person so I just used a mix of masculine papers, I think they are k and co and papermania but not 100% as I've lost the front of the pad along the way. I used the card backing from some forever friends peeloffs for the base card which I drew and cut out the letters and then simply covered them in paper and added a lotv image and a place to write the message and a peeloff to the front. I used gold elatic parcel cord and garden twine to fasten it together through three holes made with a hole punch.

Oops sorry 6:15 have to stir son and take him a drink.

Back now , right here are the pics of each letter and the card in full, hope it's not too boring. 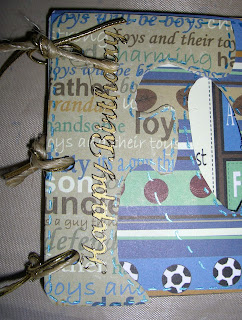 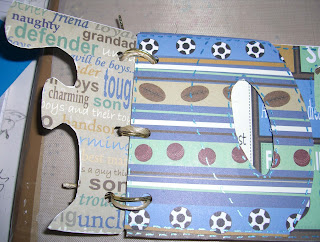 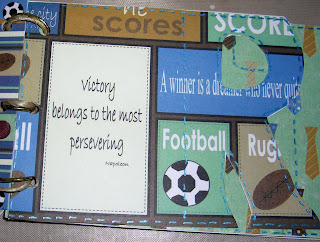 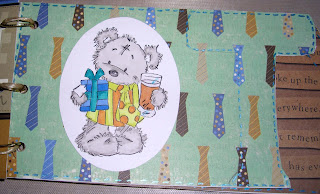 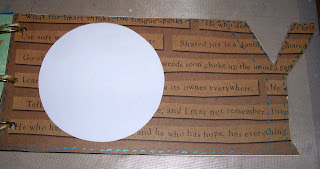 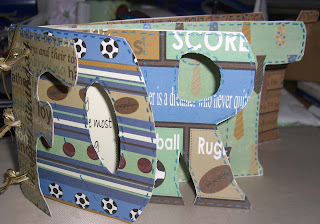 I would like to enter this card into the following challenges:-
OCC-masculine
Crafty catz-anything goes
craft your passion -masculine and include brown
Simon says stamp and show-up cycle/recycle
stamps r us-masculine
ollcb-stitching
my partner in crafting crime-use freebie of something recycled
poodles parlour-one for the boys
incy wincy -stitching
heart song inspirations-anything goes
Posted by Julye at 6:47 am 11 comments: 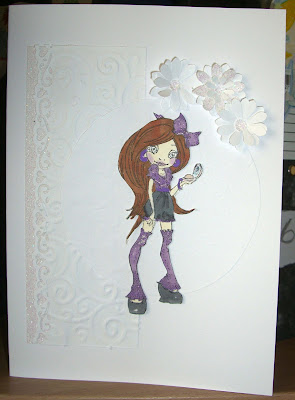 Hi all here is another card this time one I will be sending to my niece next week, I decided to use this fab sassy girl and do a wow card as I love how elegant they can look.

The sassy girl is coloured with promarkers and glitter added with sakura pen as is the shine on her shoes. I fancy cut her and did some embossing to fancy up my white background papers.Sorry for some reason blogger won't let me load the picture I want and this one doesn't show the embossing very well, the rectangle with the border has swirls on it and the circle with the image on has flowers embossed on it. I used a punch down the rectangle and added some white glitter card under it and then punched some daisy style flowers from white paper and white glitter paper. I later added an 18 and a happy birthday sentiment but popped it in the post without taking a further picture sorry, but I'm sure you can all imaging how it looked and I think as it is I quite liked it.

I would like to enter this card into the following challenges:-
The squirrel and the fox-hats or flowers
dream valley-anything goes
stamptacular sunday-border or frame
sunday sketch and stamp-layout
sweet stampin'-anything goes
saturated canary-recipe
crafting for all seasons -texture
papertake weekly-anything goes optional glitter and bling
top tip tuesday-make your own backgrounds
pollycraft-anything goes
Posted by Julye at 3:04 pm 17 comments:

Lady in Red and a quest for advice please 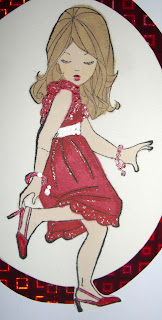 My sister in law, well sort of as she is my step brothers fiancée, is 40 next month so I made her a card, although again I haven’t decided whether to put a big 40 on it as I like the clean lines. If I do I’m not sure whether I should put it top or bottom corner or even near the oval of the image either top or bottom so I’m walking away at the mo until I decide, again open to suggestions, all you clever seasoned crafters.
The image is a whiff of joy coloured again with Promarkers and some sparkle added with sakura glaze pens. The red mirri card is from my stash as is the silver and red ribbon, the bow I attached with diamond glaze. Another very clean and simple card but I actually feel most comfortable with them, and as I haven’t had much time for crafting of late it just feels right.
I would like to enter this card into the following challenges:-
Come and get it-anything goes
Stamp,scrap, doodle-monochromatic
Shelly's images-monochromatic plus ribbon
Southern girls-inspired by a song (lady in red)
Freshly Brewed-anything goes
I love promarkers-glitter and glitz
scrapbook sisters-anything goes
Whimsy inspiration-monochromatic
ribbon carousel challenge -use a spooled item
Bows and berries-clean and simple 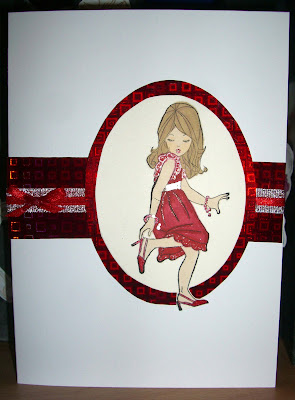 Now my quest for advice, I have a bigshot and have very few dies and have decided to take the plunge and buy some spellbinders dies but I'm so over whelmed by all the different shapes, please can anyone give me some adcive as to which would be a good place to start and what shapes you think I might get most use out of as some look quite small and I'm not sure how I'd use them, thanks in advance to all you lovely peeps.