My son now 22 couldn't decide what kind of card he wanted for his dad for father's day. He knew what he didn't want ,not cute ,not soppy, not too many bits,no cars or drinks or food, no sports,no computers, what was I left with, I saw a card by Marybeth and when I was sat pondering what to do for my son's father's day card I thought I would use her for inspiration,that and I recently got some new dies.

Now I couldn't remember exactly how Marybeth had done hers apart from she had used pinpoint rectangles from either Memory box or poppy stamps but I look  at them so often coveting what I haven't got that the two are one in my mind.

I don't have pinpoint rectangles but I had some new stitched rectangles just waiting to be tried, so I rummaged through my blue scraps file and started cutting. I knew what effect I wanted but I couldn't get a patchwork without a hole in the middle. I eventually gave in and decided on an extra patch to cover the hole. 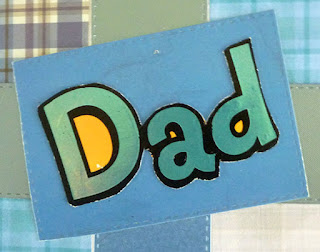 I have a pot on my desk that has all kinds of odd sentiments in it, ones I have stamped and then decided not to use, ones I have printed and again changed my mind ,some bought ones and some that are recycled from cards that I have liked and it was one of these I decided to use.

Once I had decided what I was doing and the layout quite a quick card. Just realised I said a while ago I was going to do more concise posts with less waffle , didn't last long did it.
Hope you all have a fun day. 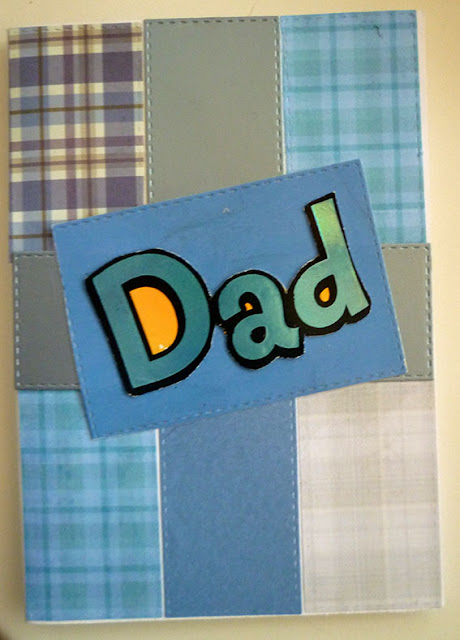 everybody art-for a boy or man

crafting when we can-any occasion 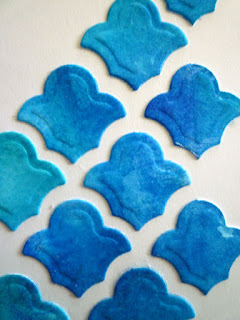 I love trying to find ways to use all the bits of a die cut especially the larger background dies ,I even have all the bits in a tub just in case I can find a use for them but so far I haven't used that many. This card does use a few though.

I cut and embossed the background die and removed it from the die trying to keep as many of the bits as possible intact.I used some dye based inks on a cotton wool ball to colour some of the trellis die and bits that would be the negatives.

I used the other half of the die cut for another card, and the coloured trellis for a further card so 3 from one die cut.

I added some glue to the backs of the negatives and laid them on the card so they were aligned as though still in the trellis formation, then removed the die cut. 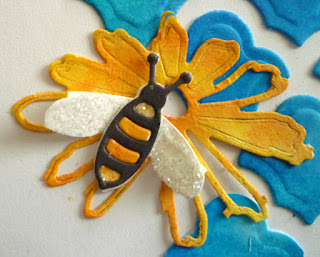 I had used a gerbra die cut as a watercolour mask and kept them once dried, but I decided I only wanted to use one of the flower heads, some of the petal centers I kept in place and removed some of the others. I like how leaving some in place add to the texture and dimension of the flower.

I added an itty bitty bee that I had previously made up coloured with promarkers after cutting from white card and glitter added to the wings.I have a little bag ready made bitty bees so I can add them to my projects when I want without having to make them up from scratch, just like a ready made embellishment.

I'm not sure what I will use this card for but think it would be suitable for male or female as a birthday,get well or just thank you or hello ,so I will add the appropriate sentiment later. 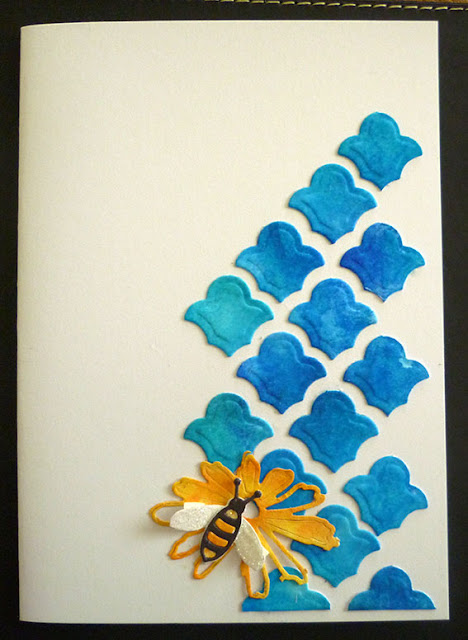 creative inspirations -spring into summer
(or how I wish it was) 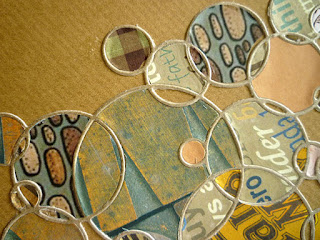 I attached to a kraft base card but haven't yet added a sentiment although I am sure it will be a happy birthday sentiment but I think get well soon would work too, really depends what's needed at the time, it would even do as a fathers day card. 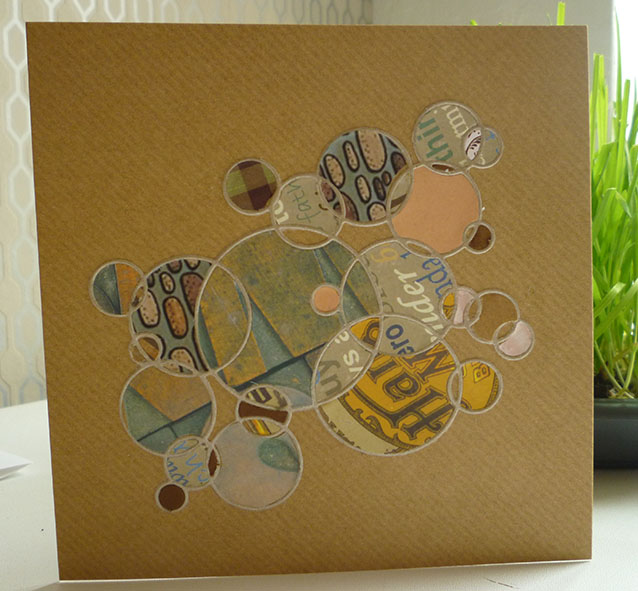 Try it on Tuesday-all about him

QKR- one for the guys 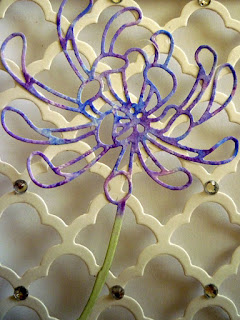 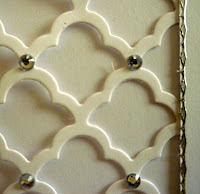 I saw a card on pinterest that used a background die as a trellis so decided to make the front of my card quite open like a trellis or a window shutter using a background die from spellbinders. I added tiny rhinestones to the joints for a little extra interest and of course some sparkle.

I finished the edge of the trellis using some peel off left overs, they are the bits that were in between some peel-off decorative strips long since used.I laid the delicate mum across the front sticking to the trellis.

I really like the effect though I think when I use the card I will write on the back of the card as I think it will spoil the effect if you can see writing through the trellis effect. 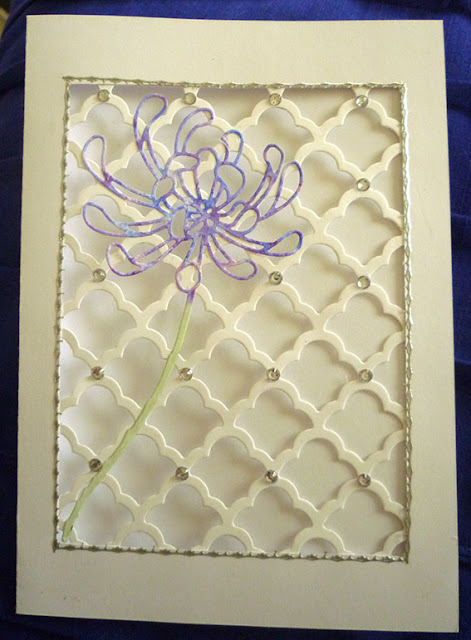 I would like to enter this card into the following challenges-

Everybody art -not cute

creative craft cottage-favourite colour combo
(I love the blues and purples especially with the white,silver and sparklies
all my favourites on one card)

I used half a die cut background and cut a frame to fit it. I added some tint bronze coloured gems to the joints and then mounted the frame with trellis onto a dark green background. 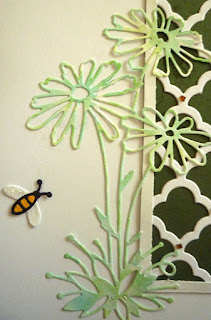 I used a white base card and mounted the trellis panel to the right hand side of the card. I used memory box gerbra flower die cut  in water colour paper, which I coloured with random splodges of different green water coloured paints. The water colours add a soft and subtle pattern.

I added the flower to the card partially overlaying the flower on the trellis panel.
I finished the card with one of my preprepared itty bitty bees which adds a little splash of golden yellow and  more sparkle.
Although my card doesn't have the bright colours that are often associated with summer I still feel my card has an air of summer especially with my little bee.

I again haven't added a sentiment as I think this card could be used for a variety of occasions and will add an appropriate sentiment when I use the card. 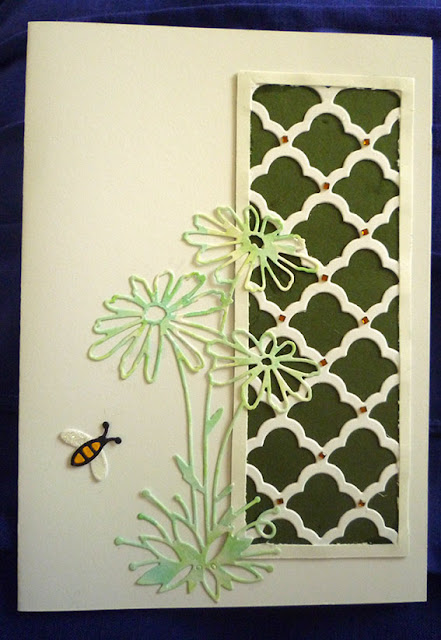 A bit more time to craft -anything goes

I love this himalayan poppy girl from aurora wings , she always looks so different dependent on the colours you use. Coloured with promarkers, and fussy cut. 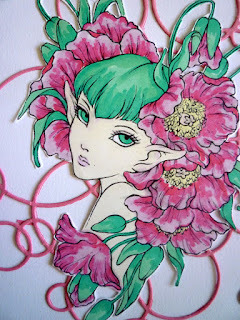 I used large ringlets die from memory box cut in pink as my background and added the image on top. I finished the card with a few sequins and a 'celebrate' using a poppy stamps die again cut in pink.

For some reason my silver sequins on the photograph look like beige dots and once again my photography doesn't do the card justice so please use your imagination. 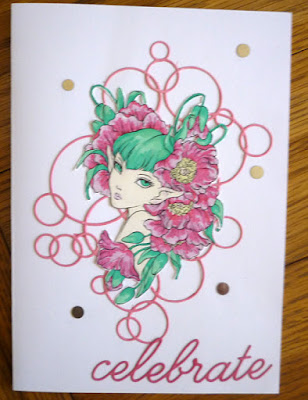 I have a notebook in which I write down all the challenges I think I may enter and use these as an inspiration point when I make a card or project. I often find myself thumbing the pages looking for those still valid. I decided if I used a bookmark it would make things easier but just using a strip of card wasn't sufficient as it often fell out which defeated the purpose . I decided to make a corner bookmark and so far this has worked better. 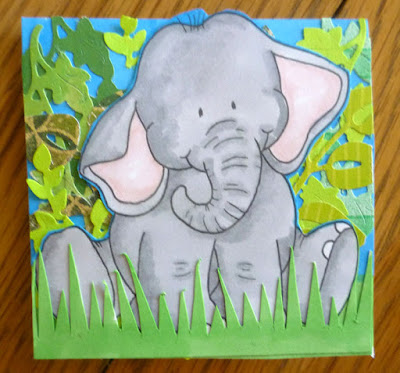 I decorated my bookmark with a Crissy Armstrong image jelly bean which I think is just so super cute.I fussy cut the image after colouring with promarkers. I coloured the base green and blue for sky and grass before adding to the bookmark I cut a selection of leaves  and ivy using the 3 foliage dies I have and randomly stuck them to create a jungle.

I would like to enter my bookmark into the following challenges:-

Not just cards -anything goes