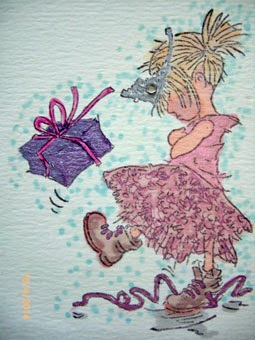 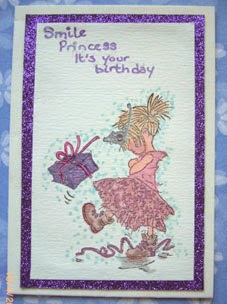 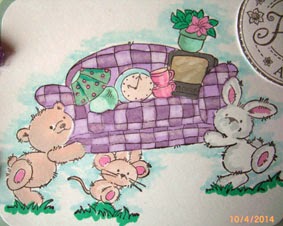 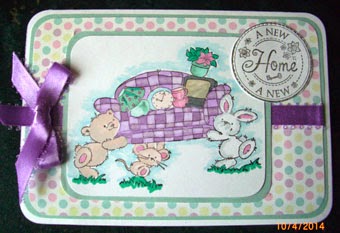 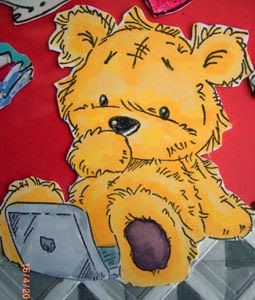 Anyway back to my card which I made for my son for his birthday, I love this sweet James image from LOTV and can see it will be well used as I know many folk who use computers of one form or another which makes this wee chap perfect for all of them and for so many occassions too from birthdays , new jobs and even exam cards.
My son acts as though his arms have been severed if he has no access to a computer or the internet in one form or another even if its only reading fan fiction on his phone. I coloured James with my promarkers and used some small stamps my son chose when he was little and liked crafting with mum to make things he uses his computer to look at or play etc. He plays star trek game online so I had to draw that one and the heart well without embarrassing him represents the dating sites he and his friends use and compare notes on. (if anyone knows any nice young ladies who want to meet my eligible son and wouldn't be put off by him using a walking frame or wheelchair to get about please contact me for further details- not too far from sheffield though as I have to play taxi driver and i need time to craft too lol). The cat represents him researching kitten care as he was looking to get a kitten see previous post to meet Issy . 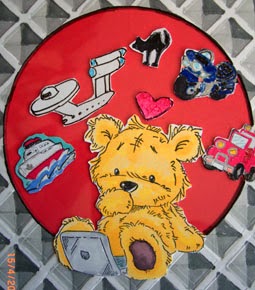 I kept the design simple and tried something new making my own apature card which I filled with red paper that I then covered with acetate to give a nice shine to before attaching the images. The top layer is embossed lattice design that I then coloured with different greys to try and represent pixels (bits used to make pictures on computer screen and cameras too) sorry if that sounded geeky but thats about as far as I can explain it. It must have worked as my son knew what it was supposed to be so that made it worth the effort.The sentiment is simply a peel off. 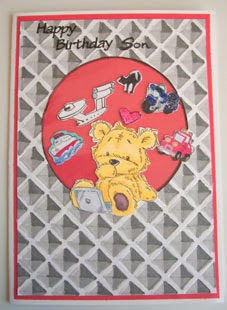 Polkadoodles is having a mini birthday blog hop with freebies and the chance to win lots of goodies to thanks to Nikky. Go join in the fun here and help Nikky and her originals celebrate.
Posted by Julye at 6:59 pm No comments: