A simple thank you

My son is so enjoying his new job and learning so much too though its still all gobble-di- geek speak to me with acronyms I really don't understand but each to their own.

Last week he was doing something new and although to me it seemed to be doing ok (I only know as he was working from home) he said he actually had to keep asking questions of his teacher so once finished he asked if I would make him a thank you card for his mentor.

I decided something simple would be best for her as it says thank you and isn't making too big a deal as I'm sure he will need more help as he learns more. 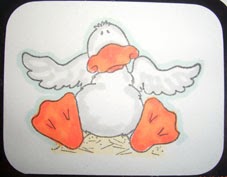 I decided to use high hopes dunno duck again as I thought this was the perfect image, keeping it simple I matted the image on silver mirri-card using a punch to round the corners and added a 'thank-you'peel-off, card done. 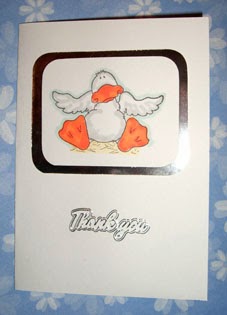 a very sweet image and card!

He is soooo sweet and your CAS card shows him off so well.

Thank you for sharing your work with all of us at Crafty Boots Challenges.

What a fun CAS card. Love your design. Thanks for playing along with our Anything Goes challenge at Color Me Creative.
Cathy xx

What a adorable thank you card.
Thanks for sharing at Lexis
Hugs Julie x

Very cute card! Thanks for joining us at CMC.

Cute ducky, thanks for joining us at Artistic Inspirations.
Louise x

Cute ducky, thanks for joining us at Artistic Inspirations.
Louise x

Great job! This is just a very beautiful card. Thanks so much for sharing this at Card Mania Challendges. We hope to see you back very soon!

Your card is so very beautiful!:

Thanks for joining us at Animal Friends

Very beautiful and sweet card! Thanks for joining us at Card Mania Challenges. Good luck and hope you'll join us again.

Fabulous Caz card, that's one cute duck! Thanks for joining us at Lexis, Susan x