What a lovely day turned out to be and it was almost warm, though not shorts weather as Andrew wanted it to be.

I have decided the sunshine brings out the best in my son,as he started off in a fowl mood this morning and decided he wasn't going to do any school work as he had planned, as Dad tickling his feet good morning this morning put paid to that and all he intended doing was playing on his computer. The sun started to shine and my wonderful son asked if I would show him how to use the washing machine. I showed him and he said fine you go in the garden an I'll do you the washing and bring it to you when it's ready to peg out, how brill was that, it so saved me having to trapse in and out to check and get the washing.


Andrew is doing quite well post surgery now, he saw his Physio last week and she said she was extremely impressed by his progress but because he was doing so well not to get disheartened as it might seem like he comes to a stand still but will just be building strength and stamina and that might not be noticable to himself but visible to others.Thankyou to all who keep asking about him Ithink it actually makes him feel quite special and does talk about you all by name asking what you've been up to. 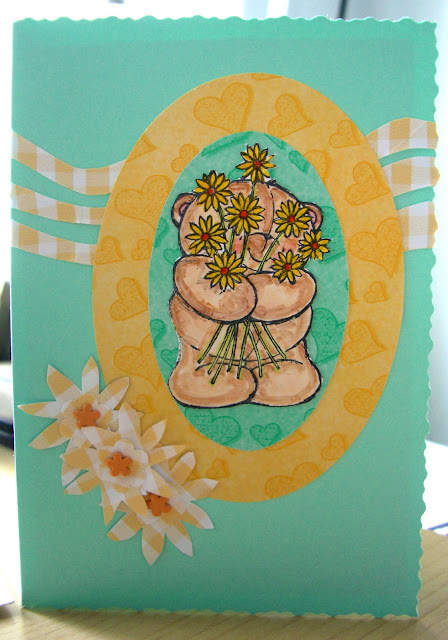 Well I suppose I best do a crafty bit now, I made this card when it was a little miserable and rainy the other day and never got around to posting it so I'm not sure how many of the challenges I considered when making it are still running but never mind will find that out in due course. 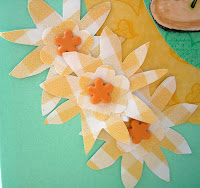 The card is pretty greens and yellows like spring daffodils hopefully. I had a go at making some flowers as none of the flowers I had looked right with the papers not even my daffodil heads. I have to admit I'm still not sure about them but at least they blend with the card. The card is designed with a child in mind so I covered the inside to make sure no little fingers got scratched by the backs of the brads and it looked pretty too. 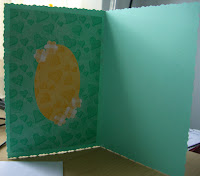 The challenges it will hopefully be entered into are:

Critter challenge-fab layout and use gingham
Passion for promarkers-the young ones
Simon says-card for a child
Quixotic-the joys of spring
forever friends- spring
Just cute bears -yellow and green combo.
Posted by Julye at 7:30 am

Hi Julye, what a cute card. The image is one of my faves by FF and the colour scheme is lovely and fresh. Glad to hear Andrew is up and about now :) Thanks for joining us at PFP this week. Hugs, Denise x

This is lovely. Love that image. Thanks for joining us at Just Cute Bears this week.

Such an adorable card Julye!!!! Thanks for joining us this week at PFP. Hugs Michele x

love the cheerful teddy card! thanks for joining us at Just Cute Bears,
hugs, annie x

Such a gorgeous card, beautiful colours.
Thanks for joining us at PFP and good luck.
Hugs Emma x

Thanks for joining the Simon Says Challenge!

great effect with the glossy card
thanks for joining us at pfp and good luck
hope you'll join us for the new challenge that went live today and have you thought about trying out for the DT call? details on the blog
Debbi
xx