Well I hope non of you are. I am slowly growing to dislike this week and its only tuesday, but don't tell Andrew as he will think it's his fault. I best explain. Andrew has revision school at school this week , well 4 mornings and to enable his to go I have to go too, because he's not strong enough to be safe to do any transfers without support as he still needs to build up his strength he is not allowed in school without support and as there is a risk he might need help and still needs help in the bathroom he wouldn't be allowed in school without me being there to accept responsibilityHe would normally have TA help but as its the holidays there is non and until he is strong enough to get himself from the floor if he fell he isn't allowed back as the TA's aren't allowed to lift.. Andrew would have been quite happy not going as I think he's got out of the habit as he missed most of december last year due to exam leave and then school not allowing him in due to the snow and his wheelchair having to be pushed outside as there is little indoor access in much of the school, and the same in January. In fact from the beginning of december till he had surgery I think he was allowed in school 2 half days before being sent home. 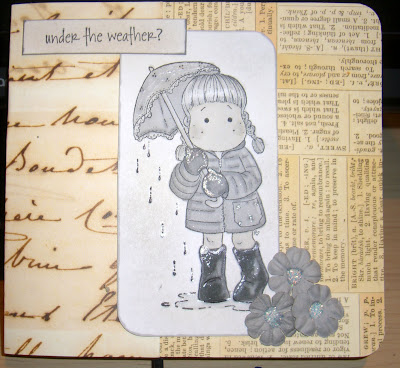 There's no wonder he doesn't want to go back, the fact that he wouldn't be allowed as yet from H+ S is irrelavent and he will be on exam leave again in a few weeks. I take him to the session , collect him an hour and 1/2 later take him to the loo, well follow on behind as I haven't got a clue where to go, help him as needed then take him back to the next session. Between times I get to sit in the staff room which was quite cold yesturday, think I need to get my winter woolies out again for today. I can't even take any crafting to do as there are only waiting room sofas in there , you know the low back and seat  long bench time sofas. There are no tables so all I can do is read, and theres nothing intresting on the notice boards either. I at least know now why info doesn't get passed on as we are told it gets put on a bulletin board in the staff room if there's anything everyone needs to know and it's literally A4 size stuck in a corner away from the coffee. You'd have to walk to it to read, why not stick it above where everyone gets their drinks thats what we use to do at the hospital I worked at, stick things abouve the coffee cups and everyone see's it.
Sorry , I'm complaining and digressing as usual, it's a good job you all know what I'm like and can skip my we rants and moans. 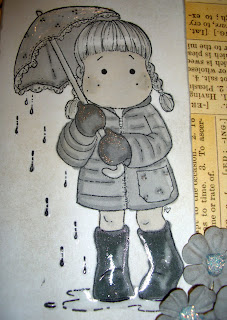 My card I have finally finished, is a get well card. I have used a magnolia Tilda stamp in a rain shower for the main image and some papers I had in my scrap bag, I think they are K and co but have had them for what seems ages so not sure. I used a sentiment from my cc sugarplums spring kit, on the front. Inside , after colouring in greys for one of the challenges it reminded me of the wizard of oz film and I decided my card could do the same. The flowers are some that came in a scrap booking kit from costco and I think the stamp is heroarts. I coloured it in sakura pens and edged with a promarker. The backing papers were a magazine freebie from way back. 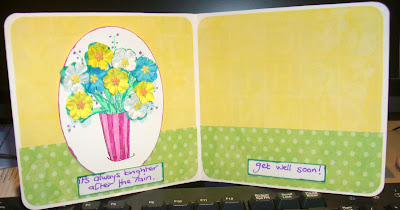 The challenges I will enter this card into are:-

Magnolicious DT challenge for April- layout, which I rotated 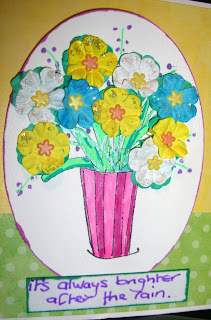 Gorgeous cards Julye, love how you have coloured Tilda, and the flowers are so pretty.
When I spent ages in hospital with Jode I took my A4 slim box (Asda £3) filled with images, pencils etc so I could use that to rest on my lap so I could sit and colour for all those hours I was stuck in a low chair with no table.
It must be a nightmare hun, all those hours just sitting there wasting time waiting for when you are next needed, I think it's awful that Andrew isn't funded for a carer in school. Where Jodie went to senior school most of the kids with difficulties had one-to-one care and the school has hoists etc and toilet needs, feeding etc was all done by the carer, the school had lifts for wheelchair users, ramps everywhere etc, for a main stream school they provided excellent help for the kids with difficulties.
I hope the time passes quickly for you hun and wrap up warm, it's colder here today
hugs Mandy xx

I think it helps to write things down gets it out the system, I love your Tilda I love how you have done b&w and a hint of sparkle gorgeous card thank you for sharing with us at ooh la la hope you join us again
Wendi

Life sounds extremely tough for you at the moment and I do hope things improve asap. Considering your problems you have made a fabulous card, many thanks for playing along with us at OLL
Beryl x

Thank you for taking time out to play along with us at OLL. Your card is fantastic, love the b&w image. Hope things get easier soon. Hugs x

Both cards are great Julye! I love the way you colored the girl and the flowers really pop off the other card. TFS with us at For Fun Challenges.

job well done with the challenge.. cute little tidla colored wonderfully!!
Thank you for joining us at Magnolia Down Under!
Hugs, Janiel

I love Tilda's glossy boots and the sparkles, she looks like she's getting wet! You've colored her beautifully, and these papers complete the vintage look. Beautiful card! Thank you for joining us at Magnolia Down Under!
Hugs,
April

Sorry to read of your difficult week, Julye - not easy for either you or Andrew - I hope things improve soon.

It hasn't affected your creativity - this card is fab - I love the contrast between the subdued colours on the outside and bright brights on the inside. Super shading on the image too.

Thanks for entering my challenge on PaperPlay this week.

Love your card Julye - and the sunshine after the rain. Hope that goes for you too.