I love the simplicity  of look that a white on white card gives even  if there are lots of layers or just one or two. I used another sugar nellie stamp coloured with promarkers though it didn't really take much colouring. I added sparkle with sakura gel pen and stickles. 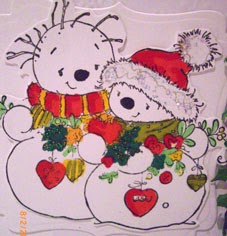 I mounted the fussy cut image on to a go kreate die cut
and mounted that onto the base card that I had part layered with some self embossed copy paper using the fiskars snowflake board that is getting overworked at present.


I used some holly garland gift tie, the start of the last pack of 3 I bought from Asda several years ago, sad that they haven't had them since. It has a wire base so I used both pva glue and double sided tape to stick it to the card. I think it finishes the card perfectly and ties in well with the garland the snow peeps are holding.

I didn't add a sentiment as I thought it would make a nice card for my newly married niece and nephew (you might remeber I made the wiccan card) apparently I got bad information as they are pagan not wiccan and my niece described the difference as being the difference between Cof E and catholic, but they thanked me for the effort and kind thoughts. I decided that as pagans they are more likely to celebrate the winter solstice although I'm sure they will expect Santa to visit too. 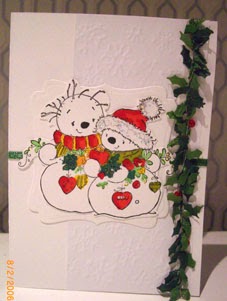 A really lovely card,loving your snowmen and the holly.
Thank you for joining in with our challenge over at CraftyHands x

Such a darling card. Verry cute image. The timestamp on your camera made me giggle, think it needs to be re-set :P
Thank you for joining us at Creative Fingers

gorgeous embossing and a great entry to our Winter Wonderland Challenge
Hugs Kate xx
PS I have new candy if you are interested :)

Gorgeous card! Thanks for joining at Creative Fingers: Anything Goes/Easel
Hugs
Dewi

I love your card with the limited color on white. The holly accent is so fun. Thanks for joining us at Creative COrner.
Nancy,DT

What a cute card.

Thank you for joining us at Craftyhands Challenge Blog.

What a wonderful Christmas card and your design is great! Love the holly border.

Thank you so much for sharing your creativity with us this week at QKR Stampede.
Best of luck and we'd love to have you visit again!

A fabulous card. Thank you for joining us at Winter Wonderland this time. x

Gorgeous card. Thanks for joining us at SFTW
Hugs
Jayne

Thank you for joining us at the Sarah Hurley Challenge.
Merry Christmas to you!

great card. love the foliage. thanks for playing along at CraftyHands