My son's girlfriends sister has recently been accepted for her dream job, a posting in the RAF. My son wanted a card to congratulate her but it had to be appropriate too.

I created the base card background by using chalks dusted over a cloud shape scrap of paper to give a billowy cloud covered blue sky. 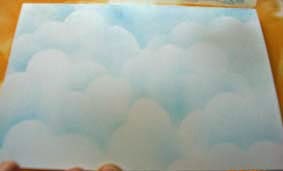 I decided rather than stamping an image onto this background  I would stamp and colour with promarkers then fussy cut the image before attaching to the card. The image is a stamp I had made several years ago from one of my drawings I did for my son who was Top Gun mad at the time so it seemed perfect. 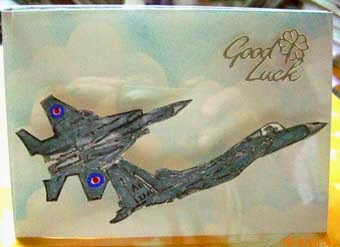 When I put it on the card it just didn't look right so I came up with the idea of applying to an acetate cover which I felt worked much better. The sentiment is simply a peel-off which I know many crafters don't like but sometimes I think they just suit the card better than a stamped sentiment.

I'd like to enter this card into the following challenges:-

This is definitely an appropriate card for the occasion! I'm sure it will be treasured. How lovely to be able to use a stamp you designed yourself! Thank you for joining us at Sweet Stampin' this week.
Chris
x

How fun. I love your adorable card.
Nancy Catch The Bug

What a great idea to put the planes on acetate floating above the cloudy sky.
Thank you very much for entering the "Dragons Lair Designs" "New Beginnings" challenge this month. Good luck.
Gwyneth DT

Thanks for joining in our January Anything Goes Challenged @ Catch the Bug!
I love all of your projects and appreciate you taking the time to join us!