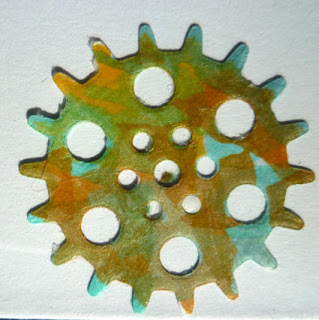 I love these cogs or gear dies by memory box and was fascinated by the tutorial by Dave on outside the box blog but also disappointed as I don't use copics and the refills are a little expensive just to experiment.
I don't have alcohol inks in similar colours either so I had to improvise with my promarkers.

I used sadle brown,raw sienna, verdigis and grey green and a graphit marker turquoise for anyone interested. I simply scribbled randomly on the cogs.

I got the shine on the cogs by adding sakura clear gel pen over the surface.

For the sentiment I used decor celebrate from poppystamps . I again randomly scribbled the promarkers onto white card big enough for the die and once cut again topped with sakura clear gel pen. 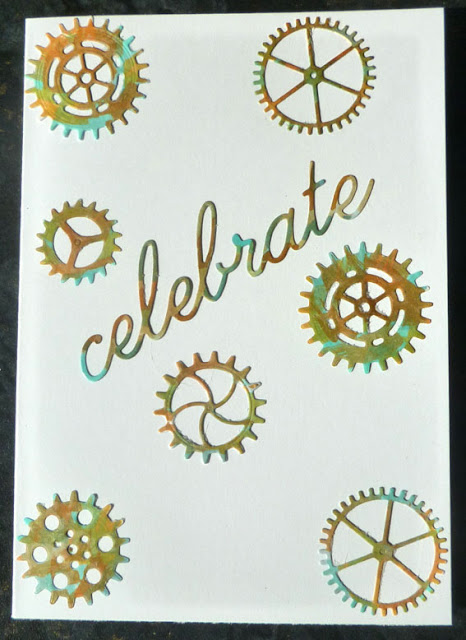 I experimented with the layout on both a kraft and a white base card and couldn't decide so I asked hubby which he preferred , well he is a man. I went with just randomly placed individual cogs rather than  connected and I think it works quite well.

Challenge up your life - die cuts

If you give a crafter a cookie-photo inspiration

I think you have done a great job making your cogs and really like how you have randomly placed them. A fab card for any male. Thank you for sharing with us in our challenge at Crafty Friends and hope to see you again. Good luck in the draw. Jennifer DT member x

Love the rusted effect you managed to gave the cogs and text, lovely CAS card.
Thanks for joining our anything goes challenge at Crafty Friends, hope to see more of your work soon, good luck, hugs Blankina

Great effect on those gears and awesome that you made use of what you had to try it out! I would say, those Promakers worked great ;o) Thank you so much for joining us at the Challenge Up Your Life challenge this time! Hope to see you again! Happy crafting,
Maike

Super cute!!! Thank you for joining us at If you give a Crafter a Cookie, good luck!!! Amy DT

So cool!!! Thanks so much for participating in our IF YOU GIVE A CRAFTER A COOKIE... challenge!!! Can’t wait to see you participate again in our next challenge!!
Deanne at A Little Bit O’ Paper

Very cool! So glad you played along with us at If You Give A Crafter A Cookie. Hope you'll join us again soon! xx Congrats on being chosen as Top Cookie! xx