One of the few things I like about autumn is the changing colours of the leaves and much as I really am a bit of an arachnophobic  I love the magical look of spiders webs after the heavy dew or rain that only really happens in autumn.
I used these lovely leaves from poppy stamps leaf collage, I love the stitching detail on them and coloured them with a mix of autumnal colours and green to simulate the early autumn changes. I used clear drops to simulate water drops from dew or rain.

I used this card by Olga from building your world as my inspiration she makes some of the most beautiful cards and when I grow up I want to make cards just like her. 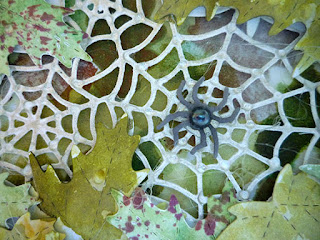 I used poppystamps fine spiders webs cut in vellum and more clear drops added . I used the die cut negative from the leaf collage as a stencil and used the same distress inks to stencil leaves to the base card front.
I cut 2 frames slightly smaller than the card and attached the webs randomly to the front of the card. I added the frames and then randomly placed the leaves overlapping the webs so it looked as if they were suspended from the leaves and filled the frame space. I trimmed any bits of leaves that poked out under the frame edge. I finished my card by adding a poppy stamps spider coloured in black promarker and used a black pearl for its body.

I haven't yet decided which orientation to use the card on ,I think it looks just as good  portrait or landscape and haven't added a sentiment as yet either, think it would make a nice male birthday card or retirement card or just a hello or thank you. 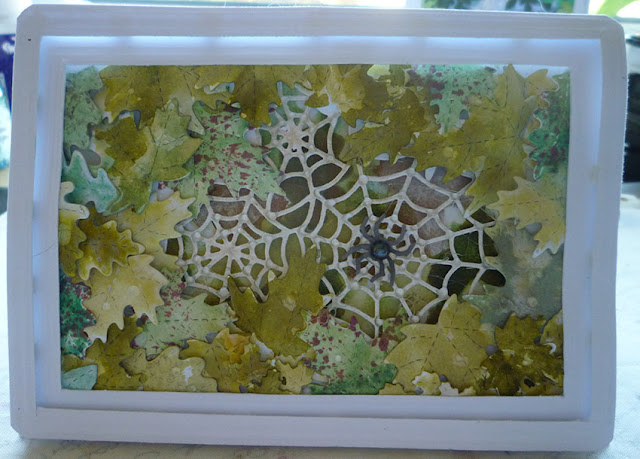 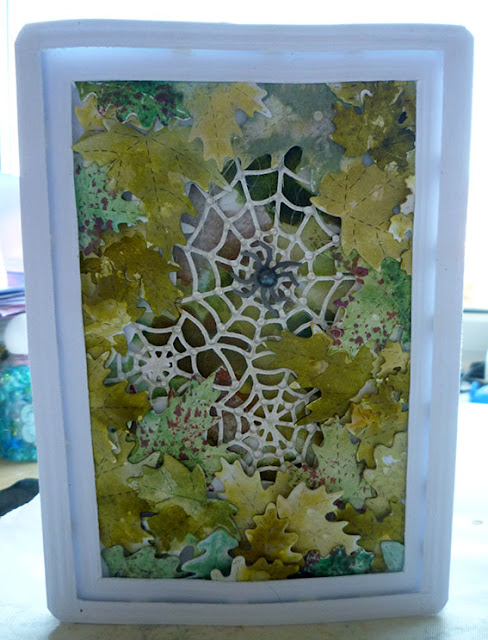 My time to craft - stitching real or faux

Fab and funky - go outside

come and get it - lots of layers

IDIC - anything for fall

left of centre -4 legged creature
(hope 8 legs will do)

absolute cool...though spiders Freak me out*lol*
thank you so much for playing along with us at mmm challenge!

ooo - this is fab - what a totally inspired card, I love it Thank you so much for playing along at Fab'n'Funky this week hugs Judith x

Gorgeous structure to this card, loving the spider and the web too. Thanks for sharing this with us at Crafty Cardmakers and good luck with the challenge. Angela x

What a wonderful celebration of nature! Love the layers of leaves and the fab webs. Thanks for joining in the fun with the Fab 'n' Funky challenge this week. Love what you did for it. Hugs, Wends xoxo Fab 'n' Funky DT

This is stunning!! Thanks so much for playing along at CCCB!!

Lovely card, great leaves and spider's web, thanks for sharing at MTTC this week.

A remarkable card, I can almost smell the early morning dew and mist. Thanaks for shwoing a different aspect of autumn. Thanks for joining us at Cardz 4 Galz. Caz DT

I hate spiders but I ADORE your card. What a great idea. Feel like walking in the forest. THanks for sharing it with us at Robyn's Fetish Challenge.

Wow!! This is totally captivating!! I love the depth, and the detail is amazing! Thanks for playing along with us at CAGI this week!
Susan - DT

This is amazing! It's like looking on your front porch at a spider-web! Thanks for playing with us at Come and Get It!
Carolyn DT

Lovely layering of several "Nature" elements for our challenge, makes for very versatile cards I agree! Thanks for joining us at the PaperGirls.

What a lovely card! Looks like hard work to make all that leafes. Thank you for joining us at Fairytale Challenge! Bianca XX

Thanks for joining us at Crafty Cardmakers!

Awesome design - love the realistic look of it all ;o) Thank you for joining our „Autumn“ challenge over at the Crafty Cardmakers ;o) Happy crafting,
Maike