I don't know about other countries but here in the UK many coastal towns have a problem with seagulls who often take it upon themselves to dive bomb people especially if they have any kind of food they can steal , easy pickings I guess.

I recently bought some seagull dies from Joanna Sheen  and decided to make a sea scene but the thought of squawking and dive bombing seagulls took over after spending a weekend in Bristol and being woken each morning by seagulls. 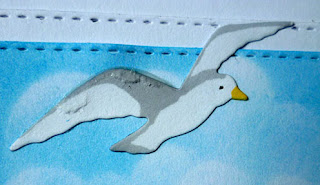 I startred by cutting out the seagulls and colouring them with promarkers along with the wooden poles and chains that came with the beachfront seagull die I also recently bought. I cut some stitched rectangles and on the smallest rectangle I used a poppystamp cloud die to cut some card that I used to chalk over the edges and created a cloud filled sky. I mounted the cloud rectangle to the 2nd rectangle and mounted both onto a white base card. 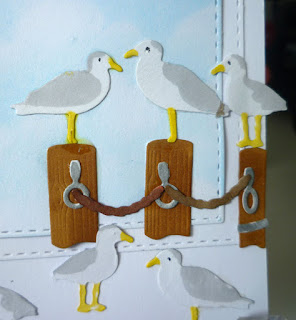 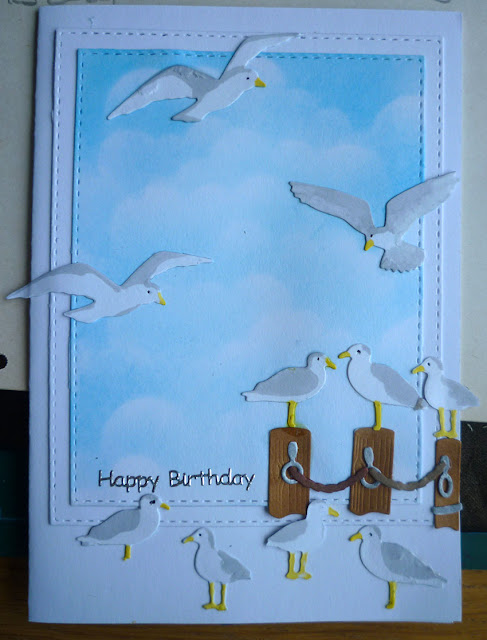 QKR stampede - up,up and away

Fairytale challenges - at the coast

I love promarkers - anything goes

Gorgeous group of seagulls. Love them. Thanks for sharing with us at QKR Stampede.
Mary

Darling sea themed card! LOVE the way you designed it with the cute seaside theme! Thanks for joining our weekly challenge at QKR Stampede!

What a fun card with so many nice seagulls. They look very pretty on your card but you are right on the beach side they can be quite annoying... I like how you colored them !
Great car and great idea of putting everything together.
Thank you for sharing your card at the Stempelgarten Challenge.
Have a nice day, regards
Melanie-Jane

Hi Julye, what a wonderful scene you created. Love the perfect background with the clouds and all your birds look simply perfect in the great layout.

Thank you very much for joining us at the Stempelgarten Challenge.

Wonderful creation! Very original!
Thanks for playing at I Love Promarkers Challenge.
Ileanaxx

Beautiful card! :o) Thank you so much for joining us at Fairy Tale Challenge this fortnight. I hope to see you again. :o)
Milka DT

What a lovely card! Looks like on the beach. Thank you for joining us at Fairytale Challenge. XX Bianca DT

Oh, i love your seagulls Card! It Looks realy like Summer and Sea! Thanks for joining us at EAC! Hugs Michi