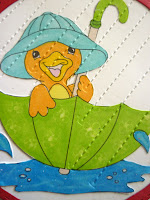 I was lucky enough to win this image from Miss  Daisy stamps and thought I'd make it bright and cheerful when colouring in with my promarkers,I used a blender pen to draw little flowers on the green brolly though they don't show up very well. I added sakura clear gel to the water to give it some shine and make it look wet.

I fussy cut the image before adding it to my circle frame base. I used some stitching lines from memory box to create the rain effect before adding the frame which I created using poppy stamps stitched circles colouring the upper frame edge in bright red. 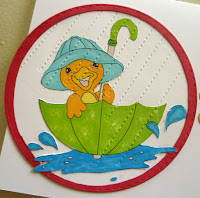 The sentiment is from the darkroom and is stamped in the same green promarker I used for the umbrella, the buttons are x-cut dies and again coloured in promarkers sticking to the colours I used for the duck.

I think it would cheer anyone up if they were feeling under the weather but think it would be especially suited to a child so will put it away in case any of my nieces or nephews feel a little poorly. 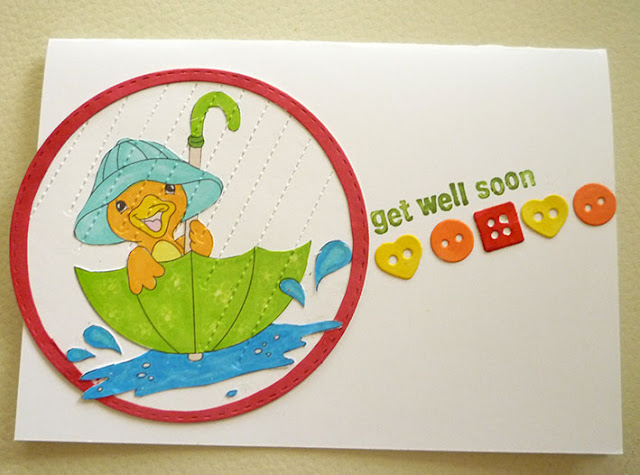 Crafty time  -for the kids

crafting for all seasons- bingo
(I chose die cuts, digi and buttons) 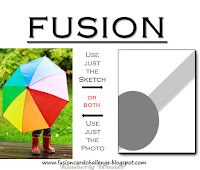 star in my pocket -use a digi

What a totally incredible idea using stitching. Thank you for joining the Simply Create Too challenge with your art.

Julye, I totally love that you used the stitching as you rain. Brilliant! Darling card that I am sure will bring a smile to someone's face. I know it did for me. Thanks for joining us at the Little Red Wagon Challenge this week!

This is cute April card!!!! Love the bright colours! Thanks for playing with us at Simply Create Too. Good Luck!

So sweet catd! Thank you for joining in at Crafting for all Seasons Challenge. Good luck :) Hugs, Valentina DT

Love the embossed texture ... so glad you joined us at fusion card challenge.

This is super! Love the stitching, love the buttons. Love, love!! Thanks for playing with us at Crafty Time Challenges.

how sweet is this, love! Thank you for sharing at Fusion!

what a great image for the Fusion challenge! love the colorful die cut buttons too! thanks for joining us in the challenge!

This is super cute! Your duckie is adorable! I love the stitched rain!

What a fun card. Thank you for joining us at Star Stampz challenge blog. Maria

your ducky is so sweet.... wonderful design
Thanks for joining us at Animal Friends
Hugs Anja

Beautiful and fun card.
Thank you for joining us at the Animal Friends.
Hugs
Kuni