For my mum and Dad

This is an anniversary card for my mum and Dad(step-dad). They will have been married for 7 years in January and have certainly earnt their stripes as over the last couple of years mum has had a brain tumour and all the surgery that goes with that and then whilst recovering fell over and shattered her elbow and did it so well she had to have an artifical elbow put in. Dad had been great through it all and it must have been hard for him as he lost his first wife to bowel cancer.

The 7th anniversary traditional gifts aren't very inspiring craft wise as it is either wool or copper and modern is even worse its desk sets and they already have those. I did think about doing some copper embossed sheep on their card but I think the significance might have been lost on them so I opted for good old forever friends.

I decided to do them in creams and browns and then found the challenge at Crafty Catz so expanded the colour scheme to fulfill the criteria for their challenge, cream, brown, white and gold. 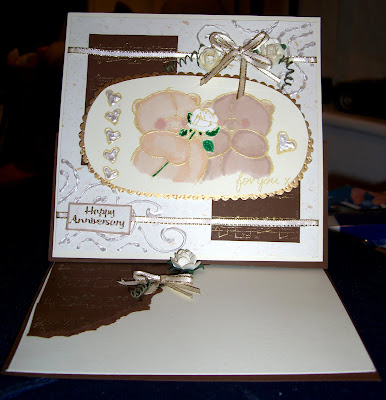 Allsorts has a challenge theme of pearls and swirls so I can enter that too as I have liquid pearl swirls and my embossing is done in pearl gold and my hearts are filled with liquid pearls too.

Create for fun have an easy theme just to make an easel card and this style of card is growing on me though I still often have problems deciding what to put on the base to hold the easel up. 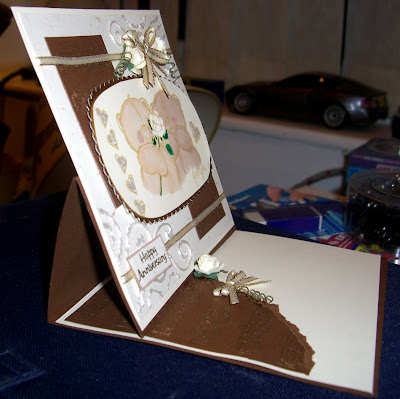 Saturday spotlight with hidden potential have a theme of your favourite style of music or a musical masterpiece. I don't have one specific favourite it really depends what mood I'm in though there are one or two styles like heavy metal that I'm not partial to listening to but am forced to as my son likes it so everyone gets to listen, I think its partly as I use to share a room with my sister who come sunday night when we had gone to bed would lay with the stereo blasting heavy rock out via her head phones goodness knows how shes not deaf, doing her homework for the following day. The music was so loud I had trouble getting to sleep so I probably don't give it a fair chance as it just holds bad memories of all the arguements it caused. Sorry all I'm rambling nonsense again . 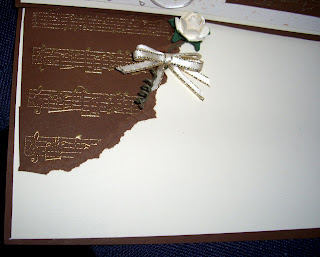 I do like romantic music and power ballards which is what this card reminds me of, big romantic gestures and they do say music is the food of love,personally I prefer strawberries and champagne but for non fattening music will do after all  I'm a cinderella and pretty woman kinda girl.

The layout of my card I've followed the sketch saturday sketch, I was pleased it worked quite well though I initially thought it might looked cluttered.

So happy anniversary mum and dad for the 22nd of January and heres to wishing you many more years of happiness together.

On a different note I have decided I am not going to do any more christmas or winter type challenges as I will have all my cards made for next year if I keep going, it didn't help that I had already made a load before I started doing blog challenges so if I want to enter christmas challenges next year I best not make any more now.
Posted by Julye at 4:38 pm

Hi Julye!! :) I think your card is just gorgeous!! I love your pretty touches of metallic and the musical image in the corner is just perfect for an Anniversary card!! I think they will love this!! I hear you about various music styles!! I love so many of them and I love your idea!! Thanks for playing along with us at Saturday Spotlight this week!! HUGS

A very pretty card adn a super anniversary card for someone so special. Sure they will adore it, it's always that bit more special when you know it's been made just for you.

Thank you for joining in my pearls and swirls theme at Allsorts this week.

Hi Julye
A gorgeous card,i am sure your mum and dad will love it,thankyou for joining us at CraftyCatz,
Hugs Dianne xx

How sweet your card is. I am sure your Mum and Dad will love it.

I particularly like the torn music and the way your rose keeps the easel card standing.

Well thought out and very romantic.

Thank you for playing along with Allsorts again this week.

A very clever creation ... love how you incorporated the torn music panel! Thanks for joining us at Saturday Spotlight! Look forward to see you again next time!!

I love this easel creation with all the embossing and all the details. Very elegant!! Thanks for playing with the Sat. Spotlight this week!

oh how gorgeous it is, i love easel cards so easy yet so effective, x carol

Adorable easel card! Love the gold accents! Thanks for joining us at Saturday Spotlight!!

That is just beautiful! I love that image. They have it in everything.