This card has caused me so many problems as I've tried 3 different designs for the stripes before finding the one I liked and I'm still not sure the whole thing is just right so it might be taken to bits again, I'll see what all of you think and then decide. 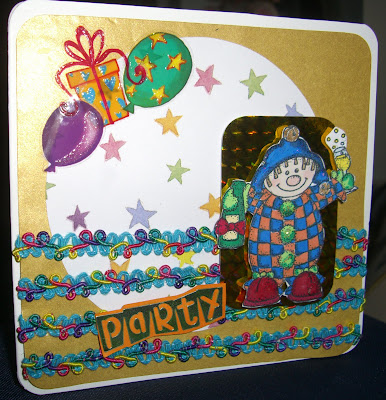 I started off with swirls done in red razzle embossing powder but decided that wasn't sparkly enough and they were too big. I tried some smaller flourish swirls in red glitter and stamped them on acetate so I didn't have to try cutting them out as the first set had been really fidly and took me ages to cut out. Once I stamped and glittered them I didn't like those either. Then I tried ribbon and that was ok but while I was putting my ribbon away I found this braid that I had originally bought to use on a bag card and just never got around to making. It just screamed party to me and as the colours were so simialr to my clown, well a couple of them are I had to give it a try. That led to other problems as the braid is so thich so I used double sided tape and glue to stick the gold backing to the card along with pva and 3mm pads to mount the clown and the party word. 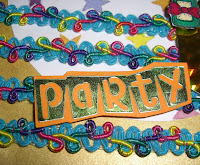 My embellishments that are on the sketch layout which I forgot to mention is for the challenge at create for fun  I used stickers for a change as I thought not only did the colours match and blend but they went with the party theme. The sentiment was a silver peel off which I used my promarkers to recolour and then mount on some card again coloured with promarkers and then trimmed.
Stickles for bling just finish off the party look, if I don't get around to posting it as a new year card I suppose it would work as an invitation, although I'd have to make alot more or perhaps it would be a fun birthday card who knows?


Simon says challenge has a party theme so I think I will pop along and join in their fun challenge .

The colours I've just noticed would fit in with the Incy wincy picture challenge theme provided they don't mind a few extra colours too.

Our creative corner have a food and drink theme and as my wee clown seems to be getting mery on a bottle of fizzy stuff I may join them to say cheers too.

Happy 2010 and however you celebrate hope you have fun between now and next year!
Posted by Julye at 2:05 pm

Lols and the DT x x

Thank you for joining us over at Incy Wincy Designs Challenge

Have a Happy New Year!!

ps if I forgot to give you the winners badge from the challenge you won, can you let me know... ta!

What a darling card! It makes me smile just to look at it - very festive. You rocked the food/drink challenge! So happy you could play along with us at the OCC during this busy time of the year!