I decided to try and get ahead and preempt my son and his Christmas card demands. In past years he's decided to tell me he wants umpteen christmas cards with only a couple of days notice , so I have already started asking who he will want cards for, so far he is only sending 5. He did tell me he wants some blank mugs so they can be personalised, not sure where he thinks I can cunjure those from as as yet I'm not allowed to drive (post-op) and that might be a stretch too far for hubby and his weekend grocery shop. 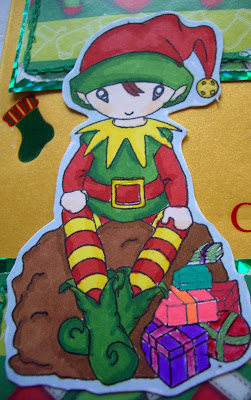 There are 3 boy cards which he wants in traditional colours and 2 girly pink cards, so not my style. The images I have had approval for so far are manga santa and elf, anf fairy and gingerbread girl all from Sugar Nellie and Funky kits so expect to see those over the next few posts. Here is the first.

I put him on a gold pearlised card , I know probably wasted on a teenage boy but hey can't drop the standards or son won't approve. I coloured with promarkers and added some rub ons for sentiment and stocking. The backing stocking paper was a magazine freebie last year mounted on green mirri card. I did try stitching with my new mini sewing machine but as yet I haven't sorted out the tension, it seems so much harder than my big multi stitch sewing machine, but I'll get there and it put the stitch hole spacings neatly speaced even if I didn't get the line quite straight. The improvisation is the thread, I had to use ordinary cotton as I did intend using some metalic thread that is in my embroidery box, quite a large box containing books , threads fabrics etc and on top of my cupboards so I was unable to lift it down , hence the improvisation so I tried to make up for it by doing chain stitch instead. 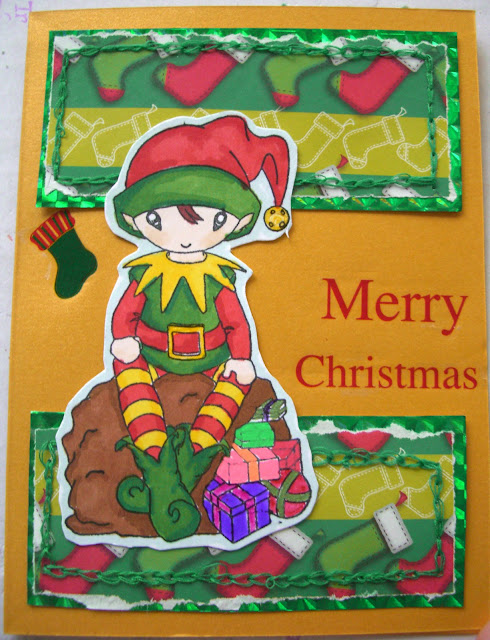 I would like to enter this card for the following challenges:-
Passion for promarkers-distressing and stitching
A spoonful of sugar-distressing
Moving along with the times-sketch layout
Frosted designs-distressing
Die cut dreams christmas challenge-anything goes
Posted by Julye at 11:58 am

Ah what a cute wee elf. Love the card its so cheerful. Thanks for joining in with us on MAWTT this week Hazelxox

fab bright and cheervful card - love that little elf
Thanks for joining us at MAWTT this week
Lisa ;)

Great card Julye. Thanks for joining us this week at PfP, good luck.
Hugs Tracy x

Cute image and great coloring!
Thanks for playing along with us at Frosted Designs!

A fab card. I love the little elf.

Very nice, thanks for joining us at DCD Christams Club.
xx

What a cutie. LOve your colouring. Thank you for joining us at Die cut Dreams Christmas Club.
Chrissyxx

Fab card hun, just love the elf & the colour combo is fab!
Thank you for sharing with us at MAWTT this week! hugs shell xx

Hi Julye, what a gorgeous card. I love the image and your colouring is fab. Your stitching is fantastic. Thanks for sharing with us at PFP this week. Hugs, Denise x

Such a great card. Thank you for joining us at PFP this week.
Hugs, Anja

Great card Julye and I love your distressing and stitching! Thanks for joining us at PFP this week. Juliexx

Hi Julye,
WOW, chain stitch, I'm impressed, I haven't done that since school! This looks fab. Thanks for joining us at PFP.
Hugs,
Andie xx

Love your wonderful card Julye. Thanks for joining us this week at PFP. Hugs Michele x

fabby card !!..thanks for sharing it with us at PFP...Hugs Debs x

Lovely card! thank you for playing with us at Die cut dreams christmas club!

Hi there, wonderful take on the sketch, great colours and lovely images. Thanks for taking part in this weeks challenge over at MAWTT, Heidi x