Boo! with a wobble 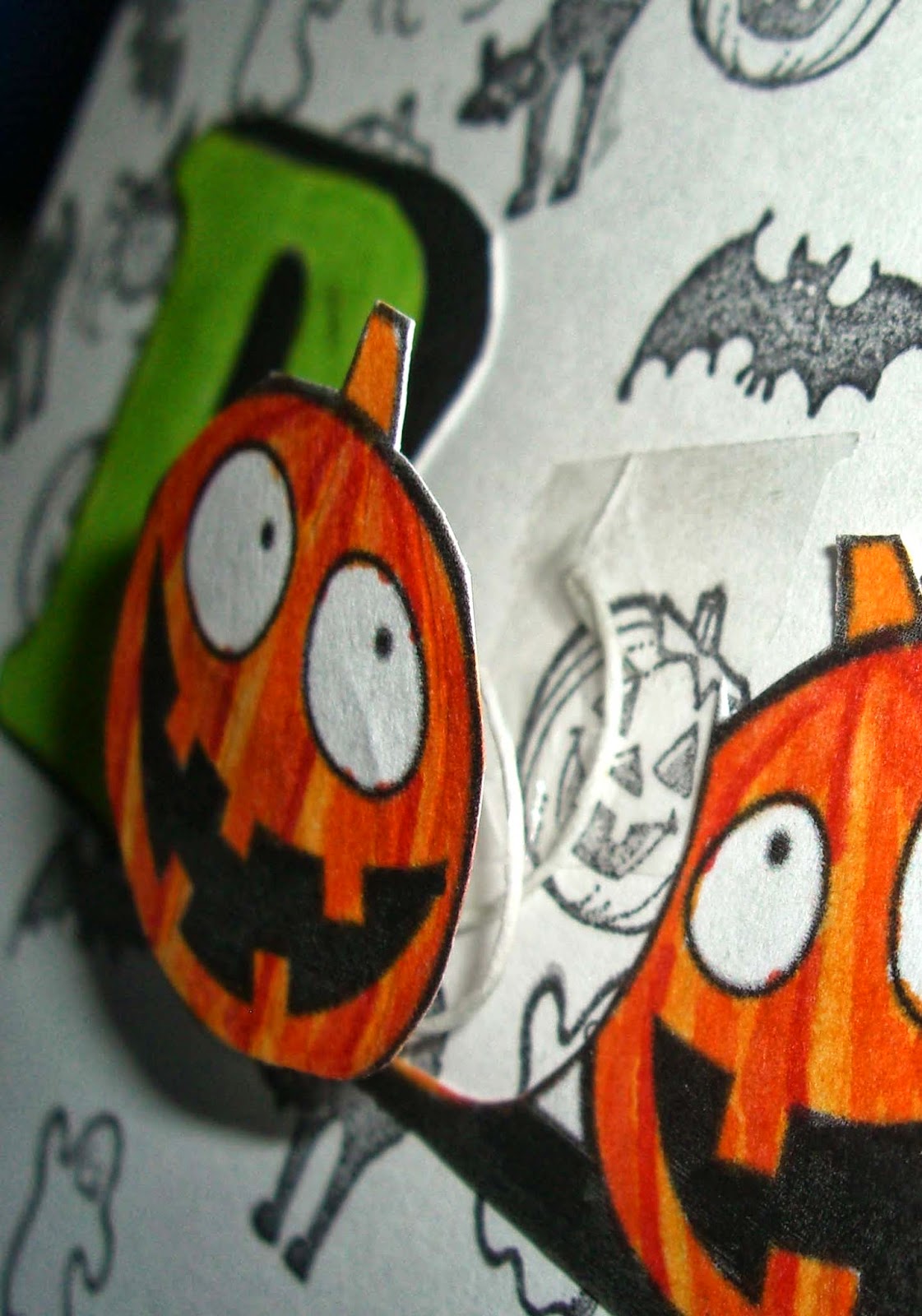 Happy friday all, I actually had to stop and think what day it is then, thats what happens when my hubby and son are both at home. Hubby has been on holiday this week so all my days have been weekend days hence my having to think. Never mind about my dizzy brain time for an early halloween card. The central image on my card is the freebie provided by birdie brown and once I'd coloured with my promarkers I decided as the pumpkins were drawn to look like they were wobbling or shaking I thought it might be fun to try and make that happen with at least one of them.
To do this I cut out the left hand pumpkin and using fine florist wire that I use when making flower paste flowers I made a small wide loop spring by winding round one of my promarker pens. I then stuck one end of the spring on the back of the pumpkin and positioned the pumpkin where it should be before sticking it to the card.

The image hopefully shows the gap this created and also how the pumpkin looks still in place on the card.

I didn't have any halloween papers so created a background with some really old mini halloween stamps that were bought when my son was little and had time for fun things like crafting, now its not interesting unless it has a computer chip and a screen somewhere he even reads books using technology more that the paper variety, that's the next generation for you lol.
I kept it simple just printing with black on the white background as I thought this would make the image which is coloured stand out more. 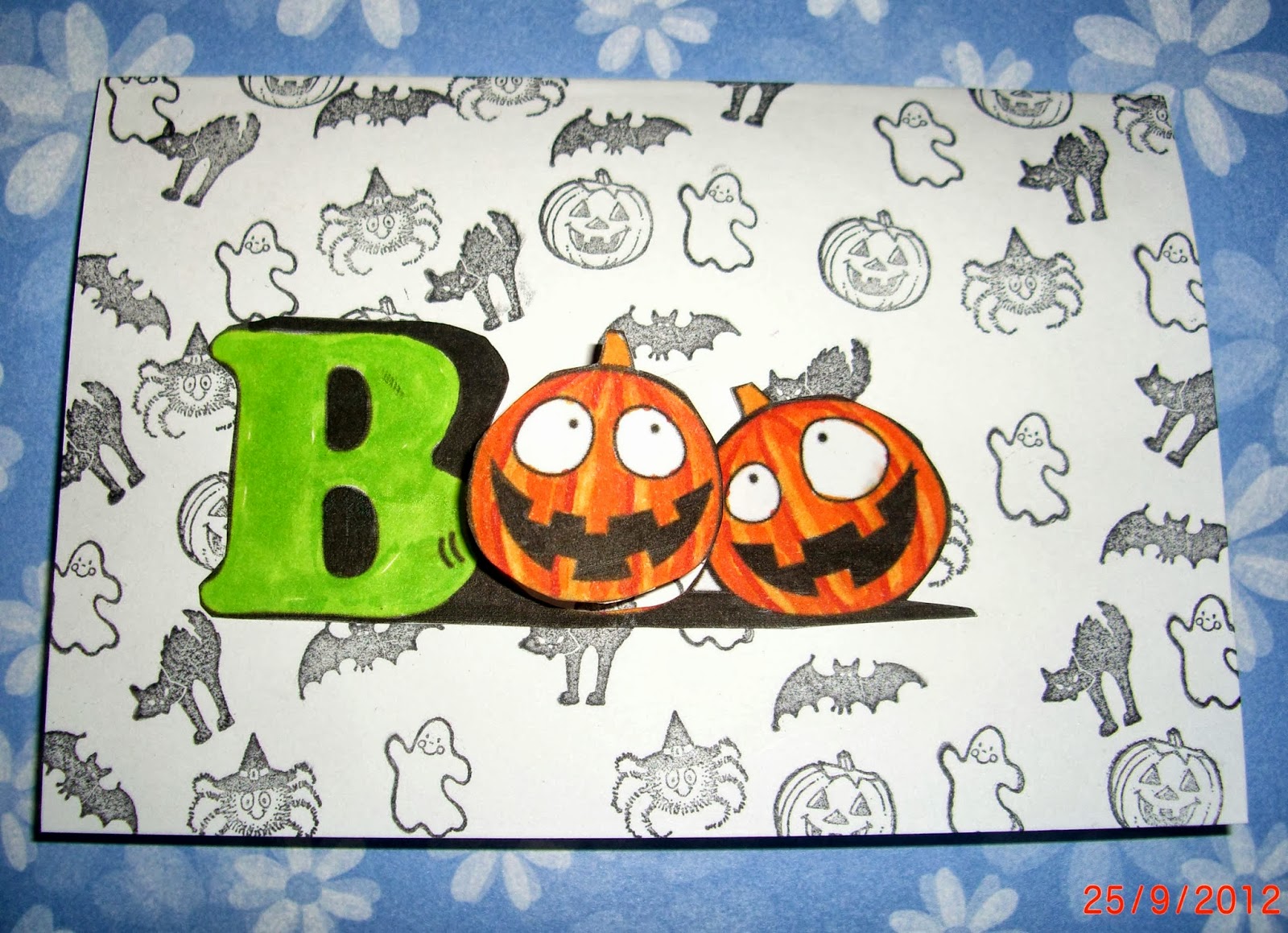 I decided to continue the design with the sentiment inside by adding cob webs and a spider to the halloween greeting, still simple but overall I was pleased with the effect and thought it was quite effective. 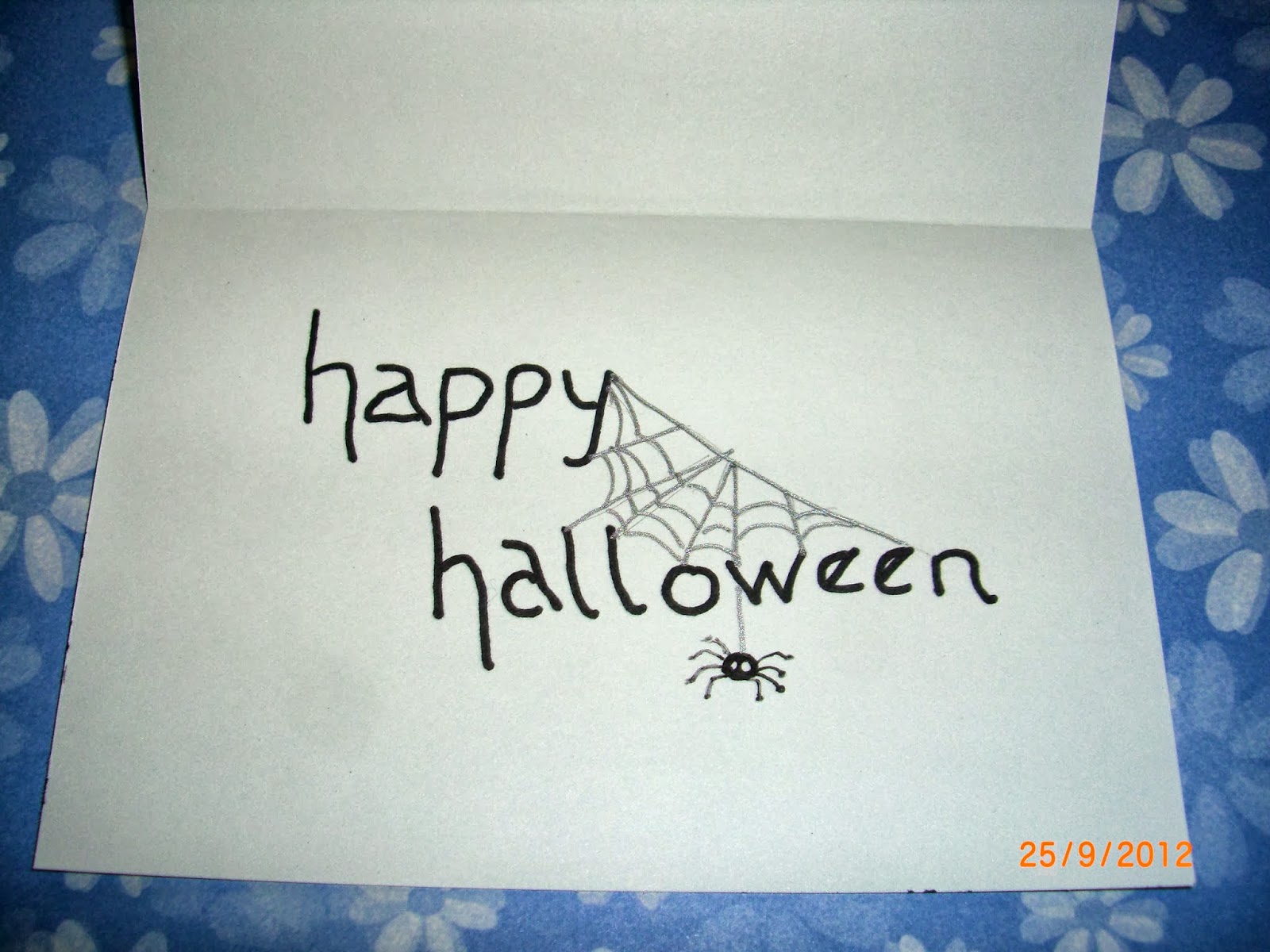 I made the card with one of my young nephews in mind so as boys tend to like the creepy things at halloween I thought the spider was a good finishing touch.

I would like to enter this card into the following challenges:-
birdie brown-use free digi
digi darla-anything goes optional twist use the freebie digi
digi sketch-use sketch and or theme of for the boys
panpastel-anything goes
shopping our stash-kids
party time tuesdays-anything goes
kaboodle doodle-use orange
crafty creations-split up your sentiment
charismacardz-decorate inside your card
auds sentiments-sentiment for a child
Posted by Julye at 5:50 pm

LOL, this is just super fun sweetie, how could you be scared by this fabulous BOO! Hugs xx

This is fab! Thanks for playing along with us at Digi Sketch Challenge.

If you have time visit my new site DigiDarlaDesigns.com

Wonderful project! A great way to deplete your stash! Thanks for playing along with us here at Shopping Our Stash!
Hugz,
Chana

Very cute! I love how you colored the pumpkins.Thank you for participating with us at Party Time Tuesdays. Good Luck! =0) Sandy Make sure you have the PTT Badge displayed on your blog to be eligible to win.

And sorry for got to say good luck

Love the wobbling pumpkin. It's a great idea! Thank you for joining this month's challenge at Birdie Brown.

So cute! The wobbly pumpkins are cute and love the inside too!
Thanks for joining us at Shopping Our Stash!

Love the pumkins they are so cute. Thank you for joining us at Charisma Cardz this week x

Very cute, I love that you made your own background and that you got use out of your "low-tech" stamps :)

Thanks for linking up at Aud Sentiments!

What a fun and happy card.

Thanks for playing at Aud Sentiments this week.