After making the last rocker card I decided  I'd make another this time a little smaller. I thought this would be a good image for my brother in law as he has a birthday coming up in december and as when he was chatting about his youth he let slip that he was into heavy rock and a bit of a rebel.

I coloured him with promarkers and added stickles to his guitar , I think he looks quite the rebel rocker. 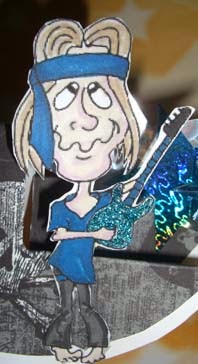 I used some DWCV rockstar papers for the base on top of white card and used scraps of different mirricard to make the stars using  my circle scribe and layered them up. 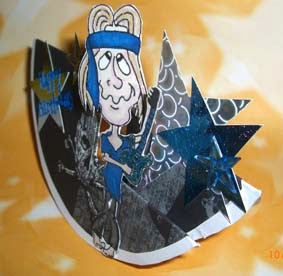 I finished the card off by adding a star gem to balance the card and a silver peel off sentiment that I coloured with my promarkers to match the image. 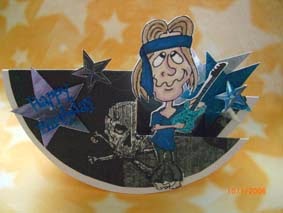 What a great card!

Thanks for joining us at One Stitch at a Time this week, and good luck!

Brilliant! Fabulous image!!! Great design!
Thanks for joining us at Hobbycutz this week.
Chris
x

I cannot think of a better way to ensure your Brother=in-Law's birthday 'Rocks' than to transport him back to his youth Julye. What a great card this is, it's so vibrant in theme and colouring. Good luck in our challenge this week. Ingrid xx (OSAAT Team)

What a fabulous rocker card, just the thing for an older wannabe rock star!! Thanks so much for joining us this week at Crafty Sentiments, Susan x

Fun image - makes a super BD card! Cute! Thanks for joining us in the Pattie's Creations Challenge! Nancy - DT

Well Julye...your card really does rock !! What a gteat card !! Thanks for joining us this week at Crafty Sentiments Designs !!

Thanks for joining us at Hanna and Friends.

Oooh a rocker card, what a great idea! And the image is perfect, as are the stars and the papers you used. :)

Thanks for joining in with our Use a Digi challenge at OSAAT this week.

Thanks for playing in our "Birthdays" Challenge #79!
Sandi ♥
DT Coordinator for Pattie's Creations Challenge!
and Pattie's shop
Home of Pattieboop and Allie!

What a great image. Sounds like the perfect card for that brother in law. Thanks for joining us at OSAAT this week. Good luck. Maggie - DT

Love this - so much fun!
Thank you for joining us at Hobbycutz this week
Love Jan
xx

Fun and FAB rocker card!! :) :) Thank you for joining us @ Crafty Sentiments “For the Guys” challenge!! I have some newly released products as candy on my blog if you are interested. :) :)
Nicole’s Craft Nook
Nicole’s 2 Step BLOG Candy

Such a fabulous rocker card the images are wonderful. Thank you for joining us at Here Comes the Boys challenge good luck
Ginny ♥

Great card, love the fun image too, thanks for joining us at I ♥ ProMarkers.

A really funny image and nice card shape! Thanks for joining us at SG-challenge. Please note that we usually only accept 8 combined challenges.
;-) Alex H.