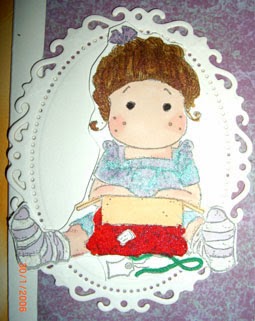 I searched my scraps and found a small scrap from a scrap-booking set I bought from QVC several years ago so went rooting for the box that it came from and found a bigger piece, to find it had a border of lime green. I always thought it had a bit of an indian feel to it but when I put it with the image I was so happy that it worked. Not sure if it's the mottled pattern that makes it work or not but hey who cares, problem solved. 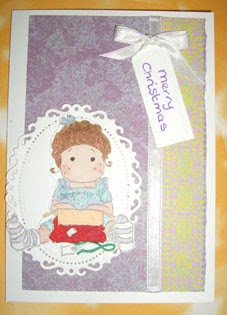 I fussy cut Tilda and mounted her on a spellbinders die cut  oval and let her feet slip off the edge. The card I decided to keep clean and simple , am so loving this style at the moment but have to stop myself adding more as I often think is it too bare and looks unfinished.
I added white ribbon as per the sketch I followed from Tuesday morning sketches and a tag which I wrote a sentiment on in sakura gel pen. Card done. 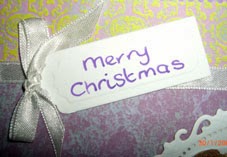 iI would like to enter this card into the following challenges:-

What a sweet Tilda! I don't think I have ever seen this one before! Great job on the sparkles! Thanks for sharing it with us at My Sheri Crafts! :)

Nice card and like you, I wish I could fit into those little party dresses too - if only they made the same in much much much bigger sizes! Thanks for joining in with our Magnolia Only challenge, Mary x

This is so cute!! I love the sketch turned!!
Thanks for joining us this week at Tuesday Morning Sketches!!

Don't you just love Magnolia images!? Thank you for joining us at Tuesday Morning Sketches.

A lovely creation. Thanks for sharing with us at Penny's Paper-Crafty Challenges and good luck.
Mags
x

Wonderful card! Thanks for joining us at My Sheri Crafts!

Lovely Christmas card! Thanks for joining us at Crafts 4 Eternity this week hugs x